The Dome lives on 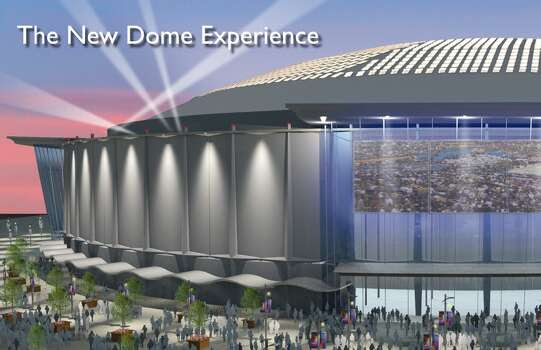 The Astrodome will not be demolished after all. The Harris County Sports and Convention Corporation recommended Wednesday that the Houston landmark be renovated with public funds.

The renovations will cost $194 million and will take 30 months to complete, according to officials.


My hat is off to commissioner's court for finding, at last, the intestinal fortitude to do the right thing. Honestly, I didn't think they were capable of it. I thought the best we were going to get was a subterranean parking garage with the skeleton of the old girl standing over a park for tailgating and shitkicker events.

Saying none of the 19 privately submitted ideas for repurposing the Astrodome met the required criteria, officials said they will recommend converting the Dome into a massive convention and exhibition space, promising "a new Dome experience."

"We feel we have the best idea," Sports Corporation Executive Director Willie Loston said. "That idea is a space that will allow many of the ideas that the proposals brought forward to take place."

Under the $194 million plan being recommended by the Sports Corp., the seating would be removed and the existing below-ground portion of the stadium would be filled in to create a street-level exhibit space of 355,000 square feet. The exterior of the structure would transformed into "an inviting green plaza," officials said.

In a statement released during the meeting, Emmett praised the sports corporation's plan.

"The concept is excellent," Emmett said. "It not only preserves an iconic structure, but it gives Houston and Harris County a truly unique and historic venue for conferences and events. Meeting planners around the world will want to use the space."


With Hunker Down's weight behind it, the Texans and the Rodeo are probably feeling a little raw after the screwing they just got. You know, the one in the parking lot.

Culture Map has more of the concept's renderings.

Other improvements would include adding glass at the stadium's four compass points for enhanced natural light and aesthetics, with a signature entry at the south end; installing solar panels on the domed roof and incorporating other building systems to improve energy-efficiency; and removing the berms, entrance ramps and ticket booths from the building's exterior to create a more continuous and useable outdoor plaza, with food vendors and restroom opportunities as well as green space.

"What we want the 'Dome to become for major events in Reliant Park is the front door," explained Miller.

The reimagined space could serve, he said, as the headquarters for Reliant Park's 24-hour security post, and would help facilitate emergency operations within the county in the case of disaster. The interior could be easily reconfigured to accommodate swim meets, graduations and other community events, football games, conventions and more.


The bond issue still has to go before the voters at some time in the future, and that could throw a monkeywrench into the plans if the TeaBaggers mobilize opposition, but today is a day to be very encouraged about the future of the Eighth Wonder.

Update: Swamplot is severely cynical about the whole thing.

The clearest sign so far that the Harris County Sports and Convention Corporation wasn’t really into the half-hearted call for bids to redevelop the Astrodome it sorta-but-not-really issued a couple months ago? At yesterday’s press conference where it — surprise! — announced its own plan to reinvent Houston’s most recognizable landmark, officials didn’t even bother to describe any of the 19 submissions it had received. None of them, declared executive director Willie Loston, actually came with private money attached. (At least not in the inside pockets of their presentation binders.)

The Corporation’s own new idea of turning the dilapidated former sports stadium into additional convention space doesn’t have any private funds attached to it either, but the estimated $194 million plan does already appear to have gained the enthusiastic support of County Judge Emmett — which isn’t so surprising, since he proposed a similar idea a mere 4 years ago. Rodeo chief Leroy Shafer tells the Chronicle’s Kiah Collier that he considers the latest plan to be a scaled-back version of a proposal the Corporation — with the Rodeo’s backing — promoted last year, after a half-million-dollar study led by some Dallas consultants.

...By the time the 2017 Super Bowl rolls around, if all goes according to plan, Reliant Stadium would sport a new front entrance — and the Astrodome will have been repurposed into the world’s largest . . . event foyer.

Having neatly disposed of all possible alternatives (save, of course, demolition), the Corporation is now passing its this-or-nothing proposal onto the county commissioners. They’ll vote on the plan next week. If the whole thing is an ingenious ploy to cue the Dome up for demolition — which the Texans and the Rodeo have a study saying they could do for a cool $29 million — we might get a sense of that fairly soon.


I suppose I could get pretty mad about that, if that were to happen.

Update: John Royal at Hair Balls is yet more caustic.
Posted by PDiddie at Wednesday, June 19, 2013