John Roberts: "Our country has changed" 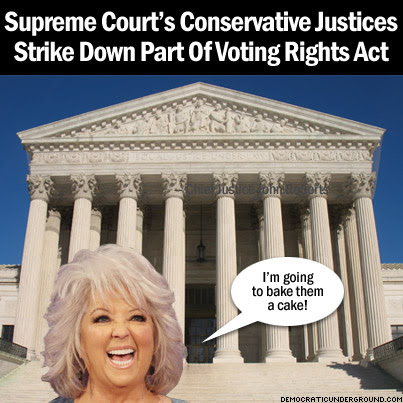 There are plenty of interpretations still getting written and posted and published, but this is the most succinct one so far...

By a 5-4 vote, the Supreme Court on Tuesday invalidated a formula established by Congress to determine which states and localities, mostly in the South, must "pre-clear" changes in their election procedures with the Jstice Department or a federal court in the District of Columbia.

But Congress didn’t take the hint and revise the coverage formula, which is rooted in voting practices dating back to the 1960s and ‘70s. The court’s conservatives made good on the implied threat from 2009 and struck down the coverage formula, meaning that the Justice Department may no longer enforce it.


Section 4 of the Voting Rights Act is the formula referenced.

The court did not strike down the advance approval requirement of the law that has been used, mainly in the South, to open up polling places to minority voters in the nearly half century since it was first enacted in 1965. But the justices did say lawmakers must update the formula for determining which parts of the country must seek Washington’s approval, in advance, for election changes.


Here's the chart Roberts provided in his majority opinion that supports his premise (that the formula in Sec. 4 is essentially archaic). It's compelling ... at least from a "liars can figure" standpoint.

Roberts uses these numbers to reach a conclusion in a similar way that Paula Deen justifies her use of the N-word. The world has changed, Roberts says, whereas Deen says the same thing ... and then demonstrates that it actually hasn't; it's just gotten a little more subtle.

But that isn't even the biggest problem with this ruling: Congress is entirely incapable of coming up with legislation that can fix the formula outlined in the now-deceased Sec. 4. Three sources for that: Chuck Todd (and a few others interviewed by MSNBC), and then Egberto Willies, and lastly, Socratic Gadfly.

Todd said on MSNBC that Congress is not “mature enough” to reach a speedy political solution.

“This is not a welcome decision, by any means,” a senior White House official said in reaction to the decision. “But there is a theoretical path for Congress to update the statute in ways that would make it constitutional.”

“As a practical matter, that may be difficult to do given political dynamics,” the official told NBC News.

Removing the map determining which jurisdictions need pre-clearance of new voting laws rendered the Voting Rights Act effectively toothless, law professor Kenji Yoshino said on MSNBC. While lawmakers could draw up a new map, “it’s not clear that this Congress is going to have the will to do that,” he said.

What the majority does not understand is that the success of the formula is what makes that increased voter participation possible. Removal of the formula even if temporary will have disastrous effects in presenting representation that does not reflect the desires of the population.

Texas is a great example that illustrates why these laws are needed. Texas finds the most ingenious ways to get around the law to suppress its voters. A state that is majority minority that votes exclusively for Republicans in statewide races is probative. Texas makes it difficult for voter registrars to get qualified, it adjust voting hours based on empirical demographic considerations that affect minorities, and draws districts based on turnout models to get around many laws. Nullification of Section 4 simply adds another tool to that toolbox. The Texas scenario is likely be replicated throughout many states.

While the Supreme Court has pretty much left the ball in the hands of Congress, it is unlikely that Congress will act for two specific reasons. Firstly, a Republican House that is in existence not by popular vote but by gerrymandering (Democrats got over one million more votes than Republicans in Congress even as they have a large majority), is in no hurry to stop the status quo. Secondly, the current Republican Party is unable to win the presidency without voter suppression. Republicans likely see this ruling as a gift.

While the Court did not specify how this would affect cases such as Texas' redistricting, I would think the takeaway is redistrict away until Congress follows SCOTUS' suggestion and does a better update than the latest renewal of the act in 2006, in line with more current demographics.

Likelihood of the current House doing this? Zero.

So, do preclearance cases sit in limbo? Use older, pre-2006 guidelines for now, or what?

This is typical of the Roberts Court on cases like this, just like the ID provisions case in Arizona decided earlier this month. Once again, it's telling Congressinoal conservatives, "Write a bill like this!"

Likelihood of the House doing that, and gutting the VRA in the guise of updating it? High.

The real solution, as I've blogged before, is to nationalize Section 5. That's what should have been done from the start, but northern "machine" Democrats of big cities, and northern suburban moderate Republicans alike didn't want to address racial issues in voting in their backyard at the time. Technically, SCOTUS struck down Section 4, as the New York Times story on the ruling notes, but, properly nationalizing Section 5 would include Section 4. That, in turn, gets at how this is, in essence, a legal memo from Roberts saying "Do this!"

But the effect is pretty much the same because Congress now needs to find another way to choose states that require oversight -- and Congress is very unlikely to agree on any such thing. The court has, intentionally or not, torn the key enforcement mechanism out of the act.

I STILL don't think that buys the GOP any more time on their highway to oblivion, mostly because I have more faith in the common man than they do. I think that people can perceive the Republican party's injustices much better than Republicans think. And the only real question that remains is whether enough of the good people take the action necessary to end those injustices.

Then again, maybe I'm just naive about that. Time, and subsequent elections, will certainly tell.

Update: More from a couple of lawyers, Michael Li and Rachel Maddow.

To be sure, the Department of Public Safety and election officials will have to take steps to be implement the law, but it is very possible those steps can be completed in time for the law to be in place for municipal and constitutional amendment elections in November 2013. If not, the law will almost certainly be fully operative by the 2014 Texas primary in March.

Don’t count on the litigation to be over, however. It is possible that groups opposing the law could bring a suit to enjoin enforcement of the law on section 2 or constitutional grounds. To get an injunction, though, they would have to meet the high standard for injunctive relief (irreparable harm, substantial likelihood of success on the merits, etc.)

Keep in mind, when the Senate last took up the VRA, it passed unanimously in 2006. As Ed Kilgore noted, "We're about to find out how much GOP has changed" since then.

You apparently missed the fact that Section 2 of the VRA is still intact, banning voting discrimination nationwide. SO the VRA is not demolished or rendered toothless by this decision -- it simply eliminates the presumption of guilt against certain states and political subdivisions that exists based upon half-century old election data and subjects them tot he same standard as the rest of the country, where those challenging a practice have to prove discrimination.

And, of course, Congress can find another formula that deals with current election data to determine preclearance -- though the practical effect might be to change some of the states and subdivisions covered. But why would anyone not seeking partisan political advantage for their side object to solving the problems of 2013 in 2013 rather than the problems of 1964?