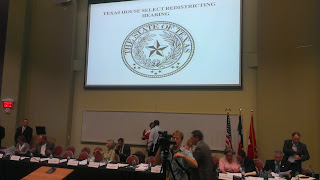 What Greg missed, I caught. Which was a grilling of the state's legal advisor, Jeff Archer of the Texas Legislative Council, by Rep. Trey Martinez Fisher. It was just a prelude to what is happening now (which you can follow over at G's O).

Martinez Fisher asked how many of the briefs and emails Archer had read, how much of the hearings he had witnessed, and other questions that essentially established Archer was fairly well out of the loop throughout this session on the topic of redistricting. Archer often looked helplessly at the chair, Drew Darby, to be bailed out, and Darby occasionally obliged him by nodding -- or shaking -- his head. After about 30 minutes of skewering, committee member Rep. Linda Harper Brown tried to short-circuit the cross-examination of Archer by Martinez Fischer (and succeeded).

Dutiful long-time followers of l'affaire redistricting may recall that Archer's deposition two years ago was barred by the state. (You can watch more of Archer speaking at an LBJ School of Public Affairs symposium. He's in the opening ten minutes.)

Update: I sat with a Fort Bend election law attorney at this hearing and he has a more nuanced and favorable view of Archer's testimony.

The most interesting thing at this hearing was the fact that Jeff Archer of the Texas Legislative Council provided some advice in public to the Committee. Archer's advice or opinions were actually very helpful to the upcoming litigation in that Archer did not believe that the interim maps being considered were intended to be final maps and that the approval of such maps would not help the Texas GOP in the next round of redistricting litigation.

I talked to Archer during the break and he basically told me that he agreed with my analysis of the interim maps and the legal effect of the Texas legislature adopting these maps. The Senate Committee approved the interim maps without change and I have no doubt that the House Committee will (do the same). However, these hearings will be helpful in the litigation that is going to occur with regards to these maps.


Frankly I was of the opinion that this hearing was going to be just another Republican kangaroo court, particularly after the one in Dallas was so contentious, and certainly in the wake this morning of the Texas Senate rubber-stamping the interim maps. My low expectations were met. Eye on Williamson...

Texas is ruled by one party. It’s unaccountable and arrogant and sees the state government as its playground. None of what happens in this special session will do anything to make the lives of Texans better. But it will allow those who run our state to score political points.


That pretty much nails it. Greg's got the rest of the fireworks at the hearing, but it sounds like they're mostly sparklers. Burka, meanwhile, eviscerates the governor, lieutenant governor, and especially the attorney general for the way this is all going down.

More speculation: I suspect Perry is furious with Abbott about this ham-handed redistricting play, which is rapidly developing into a fiasco. It really makes one wonder whether Abbott knows what he is doing and whether he is adept at the law. The triangulation among Perry, Abbott, and Dewhurst has turned in Dewhurst's favor; it looks as if Abbott has been isolated and Dewhurst has Perry's back now.


Abbott, emasculated by Perry, with Dewhurst twisting the shiv? Just too rich.

Update (Monday 6/17): Greg is covering the hearing in Austin -- probably the last of these -- and Archer is getting raked over the coals again.
Posted by PDiddie at Wednesday, June 12, 2013

1) You folks didn't mind arrogant one party rule and redistricting for 130 years. Call me after another 120 years of GOP rule and we can talk.

2) I personally think all this needs to wait until after the Supreme Court rules on Section 5 of the VRA -- which, incidentally, covers Texas because of the shenanigans of the Democrat Party.