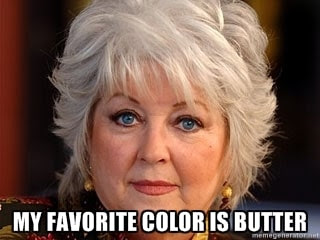 Oh y'all, Paula Deen has dun done it again. She has baked up and then stepped in a big ol' Chocolate Cow Pie with extra flies.

"Well, what I would really like is a bunch of little n***ers to wear long-sleeve white shirts, black shorts and black bow ties, you know like in the Shirley Temple days, they used to tap dance around,” ... “Now that would be a really Southern plantation wedding, wouldn’t it? But we can’t do that because the media would be on me about that.”

Another alleged racist incident listed in the lawsuit: “In the presence of Ms. (Lisa) Jackson and Uncle Bubba’s restaurant manager and a vendor, (Deen's brother) Bubba Hiers stated they should send President Obama to the oil spill in the Gulf of Mexico so he could n***er-rig it.”


Me and Paula have crossed swords before, back when she came out about her diabeetus, so I can't say this cornmealy-mouthed prevarication surprised me at all. Her version of the story, which came under oath:

Deen: Yes, I did say I would love for Bubba to experience a very southern style wedding, and we did that. We did that.

Lawyer: Okay. You would love for him to experience a southern style plantation wedding?

Lawyer: That’s what you said?

Laywer: Okay. And is that when you went on to describe the experience you had at the restaurant in question?

Deen: Well, I don’t know. We were probably talking about the food or –- we would have been talking about something to do with service at the wedding, and –-
...
Lawyer: Is there any possibility, in your mind, that you slipped and used the word “n----r”?

Deen: No, because that’s not what these men were. They were professional black men doing a fabulous job.

Lawyer: Why did that make it a -– if you would have had servers like that, why would that have made it a really southern plantation wedding?
...
Deen: Well, it –- to me, of course I’m old but I ain’t that old, I didn’t live back in those days but I’ve seen the pictures, and the pictures that I’ve seen, that restaurant represented a certain era in America.

Deen: And I was in the south when I went to this restaurant. It was located in the south.

Lawyer: Okay. What era in America are you referring to?

Lawyer: Right. Back in an era where there were middle-aged black men waiting on white people.

Deen: Well, it was not only black men, it was black women.

Deen: Yes, I would say that they were slaves.

Deen: But I did not mean anything derogatory by saying that I loved their look and their professionalism.


If you're not over Paula Deen yet, then you damn sure ought to be. But before you go, be sure and read Awesomely Luvvie's compilation of #PaulasBestDishes, yesterday's Twitter hashtag bomb.

What a delightful Juneteenth gift.

Update: Deen stiffed the Today show this morning, so I guess John Oliver and Jessica Williams at the Daily Show had the last word.
Posted by PDiddie at Thursday, June 20, 2013