A good week to be gay

What kind of week are YOU having?

Now, if you're a woman concerned about her reproductive freedom, this week has had its ups and downs, but on the whole? Meh, not so much. A person of color concerned about your right to vote? Pretty lousy. God forbid you're poor, because it's bad, been bad for awhile, and probably getting worse.

If you're an undocumented person, there's at least a little glimmer of optimism.

But if you're LGBTQ, it's safe to say you're having a good week. Hell, your civil rights are having a pretty good year. Maybe the best year ever, in fact. 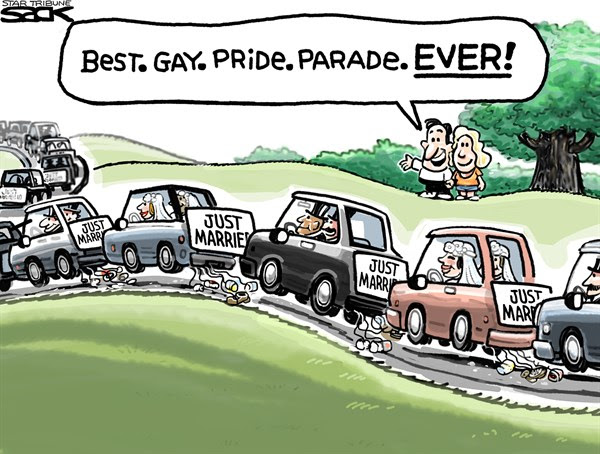 Nobody's rights have moved in the right direction farther and faster than gay rights, in particular the right to get married to the person you love. In fact, let's just stop calling it gay marriage.

You should never forget -- and I'm certain you won't --  that you'll always have people like this to contend with. The best part about sharing a society with people filled with so much hatred is that they can coin a phrase like "sodomy-based marriage" and still make it sound like fun (while at the same time being completely oblivious to themselves).

Oh yeah, I almost forgot: if you're a white conservative bigot, things are bad for you and getting worse every time you open your mouth. But then again, nobody has earned a little payback any more than you.

The mills of the gods seemed to speed up a bit this week.
Posted by PDiddie at Thursday, June 27, 2013

It's been a pretty good decade in general for gay folks.

Of course, the more I see of stories like the NSA story, the plight of the working class and labor unions, etc., the more I think that while we're giving more people equal rights, they're getting to split a smaller and smaller pie.