With a sweeping 97-33, the House voted to tentatively pass the Senate’s catch-all abortion bill largely along party lines after 13.5 hours of debates, parliamentary inquiries and stalling. Instant cheers and jeers exploded on the floor and in the gallery where people have been waiting for a vote since 2 p.m.

While applause rang out among conservatives, the shouts of “Shame” were much louder and many in the gallery were escorted out. In her speech, Rep. Senfronia Thompson, D-Houston, said the war on women was alive and called SB 5 the second missile fired by Gov. Rick Perry this year.


Just watching the live-feed and the Twitter stream was remarkable. Reproductive rights supporters wearing burnt orange shirts flooded the Capitol's gallery shortly after lunchtime Sunday afternoon. When they applauded or cheered, they were warned by DPS troopers to maintain decorum, then escorted out. When they used ASL for applause ("jazz hands") they were warned from the dais that they would be removed and arrested. 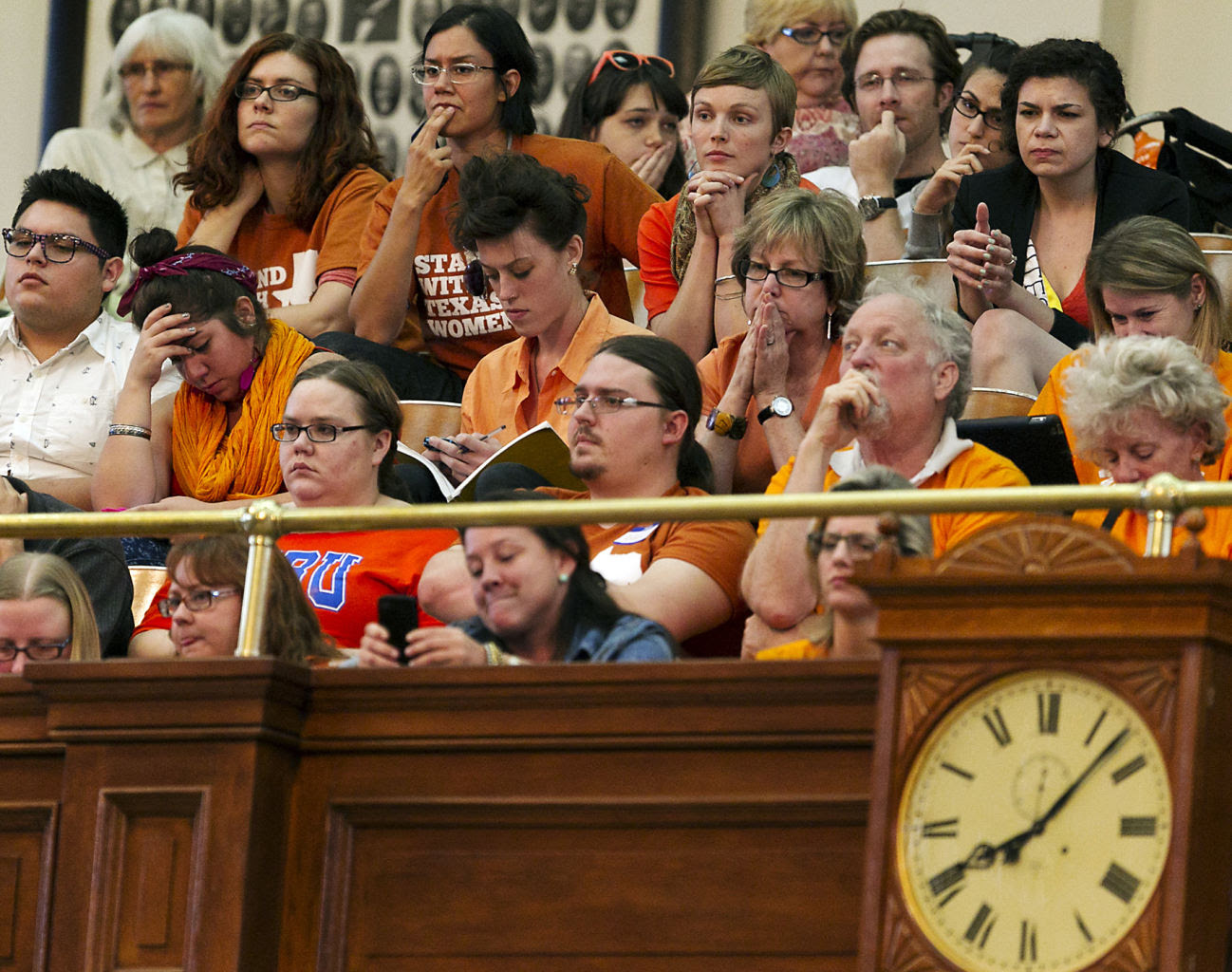 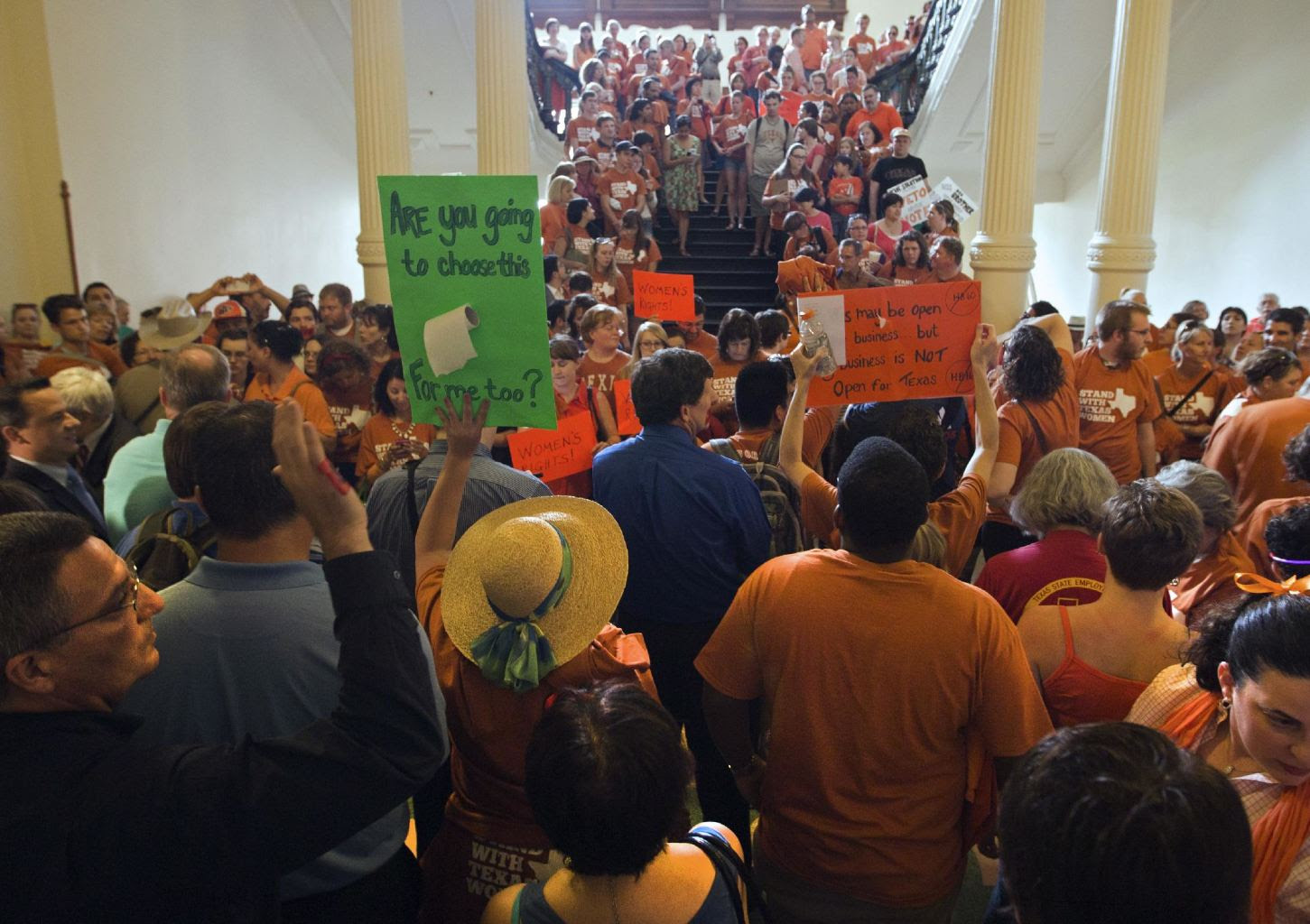 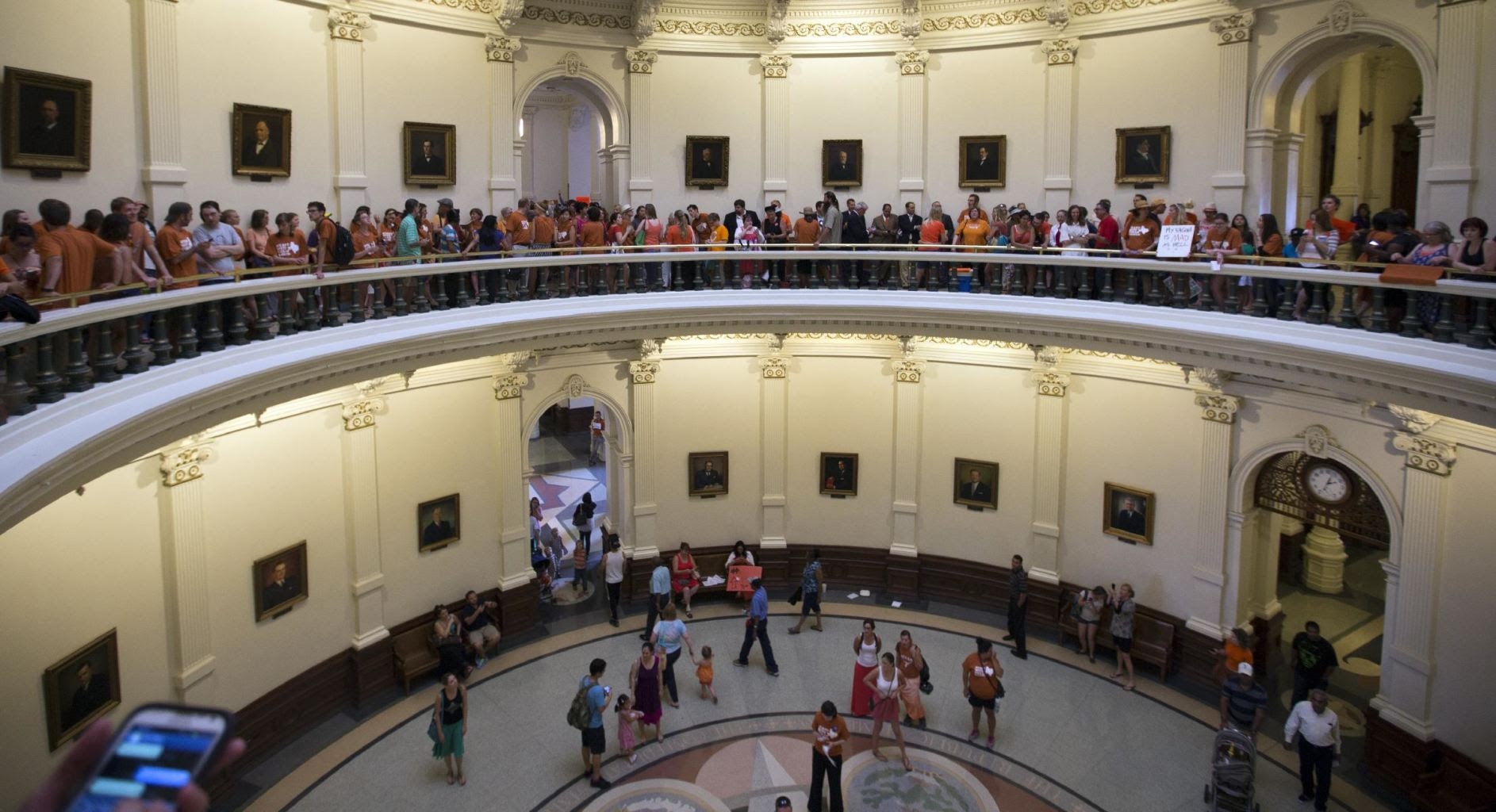 It now requires a final vote from the House before going over to the Senate, which will more than likely accept the 20-week ban provision and put it up for a vote. Senate Democrats have said they are ready to use whatever tools they can under the law to prevent the bill’s passage.

The House sponsor of the bill, Rep. Jodie Laubenberg, R-Parker, who had been missing from the front microphone since around 11:50 p.m., came up around 3:20 a.m. to close on her bill. By not debating and instead asking the chair to make motions to table amendments, Republicans saved about 10 minutes per amendment.


Laubenberg was a case study of ignorance. At one point Sunday evening, under questioning from various Democratic representatives, she compared a rape kit to an abortion -- specifically a D&C -- saying it "basically cleans (the rape victim) out".

Update IV: Laubenberg's full quote in context, from the Statesman.

The bill's sponsor stopped answering questions about her bill after the first two hours after she got into trouble denying Democratic amendments. When Rep. Senfronia Thompson, D-Houston, called for an exemption for women who were victims of rape and incest, Rep. Jody Laubenberg, R-Parker, explained why she felt it was unnecessary.

"In the emergency room they have what's called rape kits where a woman can get cleaned out," she said, comparing the procedure to an abortion. "The woman had five months to make that decision, at this point we are looking at a baby that is very far along in its development."

Her apparent confusion about "rape kits" — a phrase generally used to describe the equipment used by medical personnel during forensic examinations to gather physical evidence following allegations of rape or sexual assault — sparked widespread ridicule on social media sites. Laubenberg, who has difficulty debating bills, then simply rejected all proposed changes to her bill without speaking until the end of the debate. 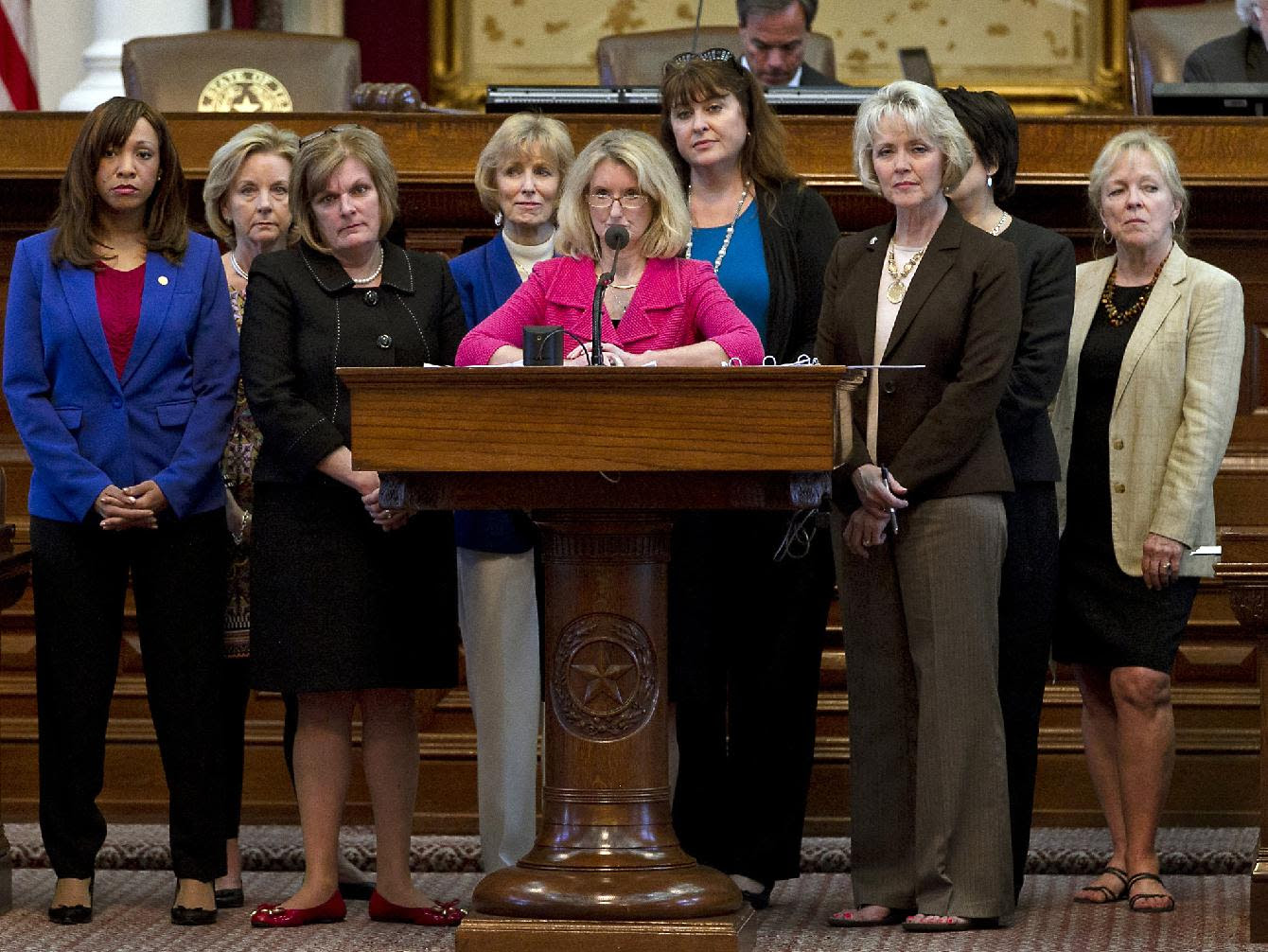 The debate was heated and emotional. Houston Democratic Rep. Senfronia Thompson, vigorously shaking a coat hanger to warn of the potential for botched home abortions, argued to add an exception for rape or incest. 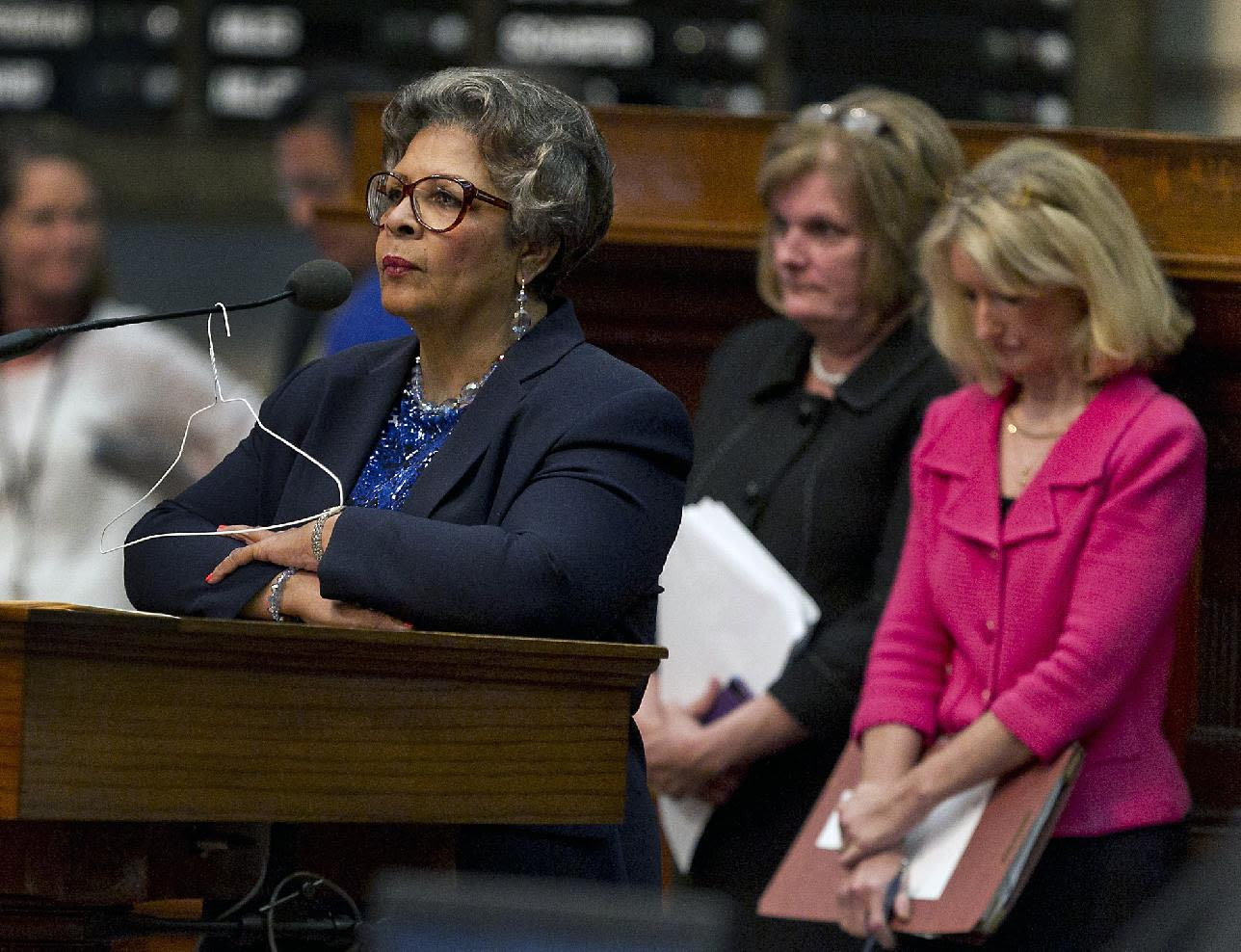 Here's some more pictures. Rep. Jessica Farrar was eloquent in a point of personal privilege dissent, and Rep. Gene Wu relentless in establishing the hypocrisy of Republican politicians playing doctors on teevee. None of it mattered, though, because no amount of facts or science can permeate the bedrock of the Republican hive mind.

The War on Women experienced its Alamo last night. But that only means there's a San Jacinto in the near future.

Update: Via Claire Z. Cardona of the DMN, the three Democrats who voted in favor of SB5 are Ryan Guillen, Abel Herrero, and Joe Pickett. (Reps. Mando Martinez and Sergio Munoz were previously and mistakenly included in that number.) Update II: Not a mistake.


One Republican voted against: Sarah Davis.

Update III: More accounts of yesterday's drama from the HouChron.

Update V (Update IV is in the middle of this post): Greg has some excellent inside analysis of those members who crossed over -- and back -- on these bills.
Posted by PDiddie at Monday, June 24, 2013