Today is the day.

As the Chron notes. 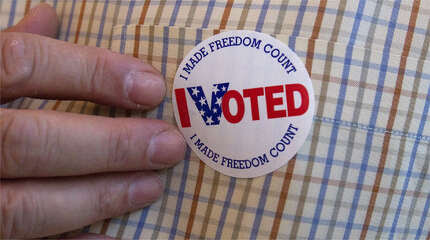 Though it has scarcely been mentioned anywhere except this little shop -- the Chronicle mostly ignored the race, except for a pathetic e-board endorsement written in full by one of the candidates himself; the other blogs in Houston did also, one a recent Houston Press award-winner; heck, even the mighty Kuffner and the Great Orange Satan -- the contest for the Democratic nod for US Representative, Seventh District of Texas has great significance.

Thank you everyone for the birthday wishes.  It's been a long time since 1964 and things have changed a lot in Houston since then.  Back then my father was working at Champion Paper Mill and my grandfather worked at Armco Steel until the day it closed.  We weren't a 'consumer society' then.  There was no such thing as 'bling'.  People had a savings account and a pension fund and your average person had no money connected with Wall Street.

More recently, the 1% told us that our pensions and savings belonged on Wall Street and convinced us that corporate politicians could be trusted to do what was right for America.  As we know, that hasn't worked out!  Now we have a choice.  We can continue to try and replace John Culberson's tea party vote with a moderate guy in a suit, or we can actually replace him with a progressive voice.  The Chronicle E-board says that if you want someone who will support the Democratic Party platform and take on the powers that be, then you should vote for me.  They say if you want someone who will support the dirty fossil approach, the status quo, then you should vote for my opponent.

For the last several years I have been hosting events at places like TSU and local churches, speaking at city council and serving on local community boards.  While my opponent was sitting on the Board of the Energy Lawyers and the Gas Standards, and was busy buying and selling utilities wherever a profit could be made, I was helping to find alternatives to usurious payday lending companies and the cradle to prison pipeline that ramrods our children into private for-profit prisons, working with women's groups and supporting Democratic causes. Representing Houston in Congress is more than talking about the energy corridor and being a member of the oil patch.  As an accountant with an MBA, I have worked in some of the oil company offices on I-10 and know what they pay people, how they treat their vendors, and how they do business.  My opponent only knows the Mitt Romney end of the business -- where you buy and sell it at a profit for yourself -- he's never actually worked in these buildings he speaks so often of.

Does it matter who wins tomorrow?  I think it does matter whether a progressive Houstonian, a community Democrat, or a moderate oil and gas corporate politician from Michigan represents District 7.  What do you think?  Plus, we won once already!  In the May primary we won the mail-in vote, the early vote, and on election day.  Let's do it again on Tuesday.

Right now 2175 people have voted in Congressional District 7 -- 1600 early voters and 575 mailed-in ballots.  That's out of the 8500 that voted in May.  (Tuesday) DOES MATTER.  Literally thousands of Democrats in Congressional District 7 will go vote (on Election Day).  Has your neighbor voted?  Do you have a coworker in CD07?  Please call or go knock on your friend's or neighbor's door and ask them to come vote with you.  If  you know Democrats in CD07, please call or email them and tell them that WE CAN TAKE JOHN CULBERSON'S JOB THIS YEAR.  Polls close at 7 tonight.  There is plenty of time!  Reach out now to CD07 voters and let's make a difference today: Community Democrat or Corporate Politician.  We are deciding that now, not in November.  I know how to beat a moderate and how to beat a Republican.  I've done it once already.  Now I need your help to do it again.


Here's one link that pulls together everything I have written on the race. If you follow the links within, you will find every claim sourced, every fact verified. That as opposed to nothing but the indignant, spitting responses of the Cargas campaign... with the exception of a photo of a postcard I signed, paid the postage on, and sent out on behalf of the Squiers campaign. Cargas whined something about Citizens United in response. As if a postcard is evidence of something besides my full-throated (and previously-and-repeatedly-disclosed) support.

The Cargas campaign consistently misinterpreted what I wrote and what Ms. Squiers said so many times I went from surprised to bemused to picking myself off the floor from laughing so hard. They got the numbers wrong many times, once declaring victory after a straw poll at a pre-primary event. He even got the district's boundaries wrong, and the Chron e-board didn't bother to correct him, just repeating his claim that he "would bring federal grants to the Texas Medical Center".

They complained to the Harris County chair and his associate and even the state party chair about so many inconsequential slights that the officials cringed every time the phone rang. They bitched about missing financial disclosure reports which weren't missing; they just couldn't find them. They wrote "Formal letters of Complaint" that objected to Ms. Squiers' holding a strategy session on how to beat Culberson. As if she should have the temerity to suggest she might get the opportunity to do so. For that joke, they had their events removed from the HCDP calendar (along with the Squiers campaign's, which was likely their hope all along). I got e-mail from their communications director threatening to publish additional obscure public records about me and directions to "take down my hateful blog". They made asses of themselves over and over again, once even with the Houston Police Department's Threat Investigation Unit.

I may yet blog about that. What I will say about it now is that I am still laughing about it.

Later on this evening we'll find out whom the voters chose to carry the Democratic banner against John Culberson. I've got plans either way; I'll go right to work helping Ms. Squiers defeat the incumbent... or, paraphrasing Harry Truman, I'll keep telling the truth about James Cargas and he will keep thinking it's hell.

Honestly, I'll be fine no matter the outcome.

Find your polling place today and a sample ballot -- who you get to vote for -- here. Everybody in Harris County gets to pick the US Senate nominee and the disputed Board of Education  representative. And if you also get a vote in CD07, you get to decide...