Holder to speak in Houston today at NAACP *update* 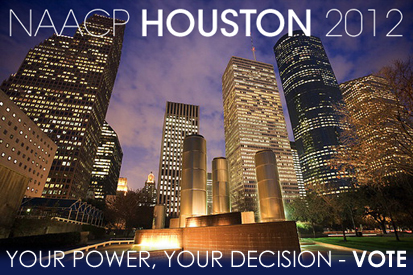 The subject of Texas' Photo ID law will probably come up.

The NAACP vows to register 1 million new voters in time for the November elections to overturn what leaders called an "onslaught of state restrictions on voting."

Alluding to the long struggle of the nation's oldest and largest civil rights organization, Board Chair Roslyn Brock insisted in the opening address of the association's 103rd annual convention on Sunday night that voting rights were again in jeopardy.

"Our right to vote is under attack more than at any other time in history since we passed the Voting Rights Act of 1965," she said. "We overcame then and we shall overcome now -- but only if we are willing to dedicate ourselves to fighting a battle that many of us thought we had won many years ago."


Attorney General Holder, while in Houston to speak to convention attendees today, will likely be paying attention to matters back in Washington.

Texas will launch a challenge to a central piece of civil rights legislation in a Washington court on Monday in a case the Obama administration has characterised as a fight to protect the right to vote.

The five-day hearing will rule on whether the US justice department has the power to block Texas from implementing a state law requiring voters to show photo identification at the polls – a move critics say will disenfranchise hundreds of thousands of people, principally Latinos and other minorities.


Yes, now that the RP of Tx has put abolishment of the VRA into its party platform, we know that this is just another ingredient mashed into the stew of Daily/Weekly/Perpetual Outrages O'Day that conservatives have to keep stirring in order to stoke the anger and hatred that, in turn, motivates their base to turn out and vote.

Supporters of the (photo ID) laws cite anecdotal cases of fraud as a reason that states need to do more to secure elections, but fraud appears to be rare. As part of its effort to build support for voter ID laws, the Republican National Lawyers Association last year published a report that identified some 400 election fraud prosecutions over a decade across the entire country. That's not even one per state per year. (emphasis is mine)


You can expect some of those "supporters" to be seen outside the GRB "protesting" today.

Two of the three judges on the panel were appointed by Democratic presidents so it might seem unlikely the court would overturn the Obama administration.

The Texas lawsuit for approval of the voter identification law is: State of Texas v. Holder in U.S. District Court for the District of Columbia, No. 12-cv-128. The judicial panel is composed of Appeals Judge David Tatel, District Judge Robert Wilkins and District Judge Rosemary Collyer.


Mitt Romney is slated to speak on Wednesday morning to the convention; Vice President Joe Biden is scheduled for Thursday. There's probably time reserved for the president if he decides to make an appearance, but at this point that would be a surprise.

More as it develops.

Update: Holder will not speak today because he was delayed at the airport, and has rescheduled for tomorrow, according to this Tweet.
Posted by PDiddie at Monday, July 09, 2012