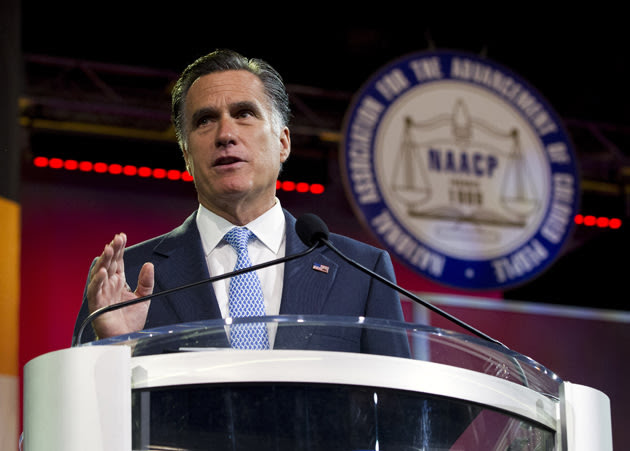 "I believe that if you understood who I truly am in my heart, and if it were possible to fully communicate what I believe is in the real, enduring best interest of African-American families, you would vote for me for president," he said. "I want you to know that if I did not believe that my policies and my leadership would help families of color -- and families of any color -- more than the policies and leadership of President Obama, I would not be running for president."

His audience greeted him with respectful, if not enthusiastic applause, and applauded occasionally at points throughout the speech –- until he said he would eliminate ObamaCare, the Affordable Care Act upheld by the U.S. Supreme Court two weeks ago. The audience responded with thundering boos. His listeners also booed a few minutes later when he said he would be a more responsive president to the African-American community than the current occupant of the White House.

Visit msnbc.com for breaking news, world news, and news about the economy

This was a fair yet slightly pleading appeal. Romney displayed a little more than his usual angst before an audience that demonstrated both polite respect and strong opposition when they disagreed.

I don't think he scored any points with anyone who hasn't already bought what he's selling. And scant few of those people were in the GRB this morning.

Mission not quite accomplished, but he gets an E for effort.

“I have no hidden agenda. I submit to you that if you want a president who will make things better in the African American community, you are looking at him,” which was met with a mixture of polite applause and jeering. Romney soaked it in awkwardly for a few seconds, then said, with a game nod, “You take a look!”

All things considered, the speech could have gone a lot worse. Aside from this moment and his promise to end Obamacare, the speech was at least politely received, and the crowd didn’t even seem to mind when Romney took a backhanded shot at President Obama for sending Vice President Joe Biden (who speaks to the convention Thursday) instead of attending himself, saying that “if I am elected president, and you invite me to next year’s convention, I would count it as a privilege, and my answer will be yes.”

The speech was never likely to earn him many, if any, black votes, but the sections where he was booed were somewhat to be expected, and reinforce Romney’s position with voters who agree with him on health care reform, and who are leaning away from the President. The rest of the speech was vague enough to avoid drawing any more negative reactions.