Not Mitt Romney's version, mind you, but that as presented by the Anglo-Saxons in charge of last night's Olympic opening ceremonies. 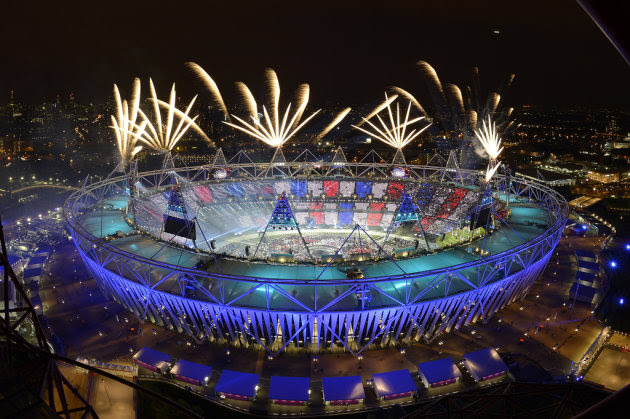 True, much of the talk inspired by NBC's tape-delayed broadcast Friday night probably hovers somewhere between "well, that was just nuts" to "what the …?" But as long as it shoves the Olympics to the front of the national conversation, NBC will take it.

Granted, "strange" seems to be the Opening Ceremony stock in trade these days, as each organizer tries to out-do, and out-shock, the last. But even when you apply the 1992 Albertville opener-as-Cirque du Soleil standard, London's show, designed by Oscar-winning Slumdog Millionaire director Danny Boyle— with its grassy knoll and light-board hospital beds — was boisterously, Britishly odd.

It was delightful at times, to be sure. But just as often, it was trying so hard to create magic and impart meaning that it became impenetrable.

The Queen parachuting into the stadium as a Bond girl? Fun. Rowen Atkinson destroying Chariots of Fire? Peculiar, but fun. The flying bicycle dove? Also fun, even if it did look more like a flying monkey.

But the dancing sick-kids salute to the National Health Service, complete with a Mary Poppins air raid and a giant Franken-baby? Much less fun, and more than a bit bizarre. "I don't know if that's cute or creepy," said NBC's Matt Lauer proclaimed about the baby, as if "cute" were actually an option.


There was whole lot of Anglo-Saxon history presented at the opening of the opening that was completely unfamiliar to this Anglo-Saxon. But I had the sound on mute, as I usually do, so that Lauer and Meredith Viera weren't explaining it to me.

The Industrial Revolution without all of the slavery and pollution was interesting, though.

Whitewashed though it may have been, it was the spectacle that Opening Ceremonies always are... as long as you changed channels pretty quick after the Parade of Nations began. That shit puts my feet to sleep.