Biden at NAACP: "the character of his convictions" 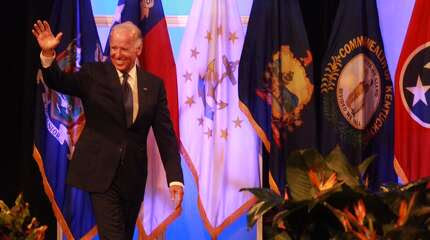 He wasn't talking about Mitt Romney's, either.

Biden was relaxed and confident, completely at ease before the audience, a stark contrast to the Republican. He made a few of the by-now-expected Biden-esque malaprops; "it's good to be home", "You go home from the dance with the ones that brought you to the dance", and the like. Once he got on script he was fine, touching on alternative fuels, equal rights for women -- from pay to reproductive choice -- and advances in HIV treatment as compared to a disregard for science and education on the part of conservatives.

The topic of senior health care gave the vice-president the opportunity to rail against the attacks on Social Security, Medicare, Medicaid, and employee pensions from the GOP. And of course the Affordable Care Act.

"We see a future..." ...where everyone has affordable health care, where everyone pays their fair share of taxes, where the wars come to an end and the troops come home. "Mitt Romney sees a very different future."

Biden pivoted nicely to the purpose of the venerable civil-rights organization: civil rights, particularly voting rights. He reminded the listeners that the House of Representatives had voted to block the Justice Department from even investigating allegations of voter suppression. He even rolled out a little Scripture at the end: "we are our brother's keeper".

It was convention-standard boilerplate for a home field crowd.

Biden's half-hour-long remarks were prefaced by a short video from the president, in which he declared that he stood "on the shoulders" of the NAACP and their long history of winning civil rights struggles.

No harsh words for the opposition, the requisite applause lines, some funny mash-ups but no actual miscues. SOP Joe Biden.

The Vice President’s speech was a veritable truckload of raw ribeye steaks for liberals, grilled to perfection by Biden’s easy, confident connection with the crowd, who responded with vigorous applause and frequent cries of agreement. Biden, himself, noted near the end, “This is preaching to the choir.”

And preach, he did, drawing disappointed boos when he foreshadowed the end of his speech, saying “Let me close, my friends,” then raising the specter of a Romney-appointed Supreme Court. “Folks, this election, in my view, is a fight for the heart and soul of America,” he said.

“These guys aren’t bad guys,” he continued, “they just have a fundamentally different view. The best way to sum up the President’s view, my view, and I think your view, is we see America where, in the words of the scripture, what you do unto the least of my brethren you do unto me.”