Cargas Smear of the Day

So perhaps you're aware of the Nixonian dirty-trick website with the URL of the name of the female candidate running for the 7th Congressional District. I'm obviously not going to link to it.

It contains some images of public records. A link to the website was circulated in an email earlier this week through Carl Whitmarsh's listserv by someone named "Alice Addertongue". James Cargas, in an email reprinted in yesterday's post, says he doesn't know who that is, or where the website originated.

So I decided to find out for him. It took me less than five minutes.

I checked the whois domain register for that URL (here's a screenshot of it in case it gets revised, or disappears, like Evan Mintz's name from the Jamaal Smith supporters list)... 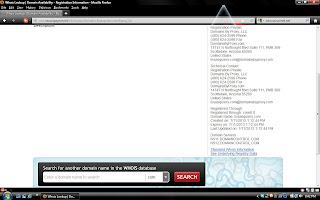 Click here and scroll down a little, reading the domain information in the right-hand column. Note that the adminstrative and technical contacts are marked 'private', but that the domain was registered through something called cree8.it on July 11 of this year.

Google cree8.it and click on that. Here again is the screenshot. 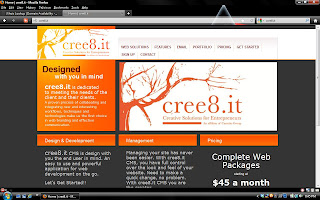 Top left, under the name: "An Affiliate of Carreno Group."

I swear, these men are either so ignorant they can't pull their pants on with the zipper in front or they just don't care what anybody thinks.

Which do YOU think it is? Frankly I think it's both.

To clarify, this kind of thing is not illegal. Emily Ramshaw's excellent piece about online impersonation in Texas politics appeared just two weeks before primary election day, two months ago.


Straddling the line between dirty tricks and political strategy is as old as elections. And campaign impersonation dates at least as far back as the 1970s, when Donald Segretti, President Richard Nixon’s re-election operative, forged letters seeking to discredit Democratic presidential candidate Edmund Muskie — a move that landed Segretti in prison.

But social media sabotage is in high gear in Texas’ later-than-usual primary, from fake Twitter feeds to deceptive website domains to allegations of email and Facebook forgery.


Nope, not illegal. Unethical, slimy, deceitful, disreputable, disgusting, venal and prevalent on the Republican side of the sewer we call politics, but not illegal. Yet. Maybe the Republicans in the Texas Legislature will take up a bill that addresses the issue in the next session, since they seem to be the most frequent victims of it.

Here's today's question, only partly rhetorical: do you think James Cargas and Hector Carreno think they are powerful enough to get away with this? Here's an excerpt at the very end of that article from a fellow named Weston Hicks, an analyst with a conservative online firm named AgendaWise.

Hicks said AgendaWise routinely exposes false attacks, and doesn't engage in them. “Though we don’t participate in them, false political activities are like any lie,” he said, "they can be useful if they don’t get you in trouble.”


That's obviously what Cargas and Carreno are counting on: that they won't be held accountable for their actions. I see no logical way for them to disavow their association with these nefarious tactics. They will probably ignore them, as they did my calls for them to remove the person who worked for their campaign who posed as a volunteer for the Squiers campaign at one meeting.

Maybe they can use the Mitt Romney/Bain Capital defense.

Anyway... what I would like to do at this point is ask a few additional questions.

In light of the above, is James Cargas still worthy of your support? Is he still the kind of person you thought you were endorsing? Do you endorse this conduct?

The same questions are directed to every single one of the Democratic club members, precinct chairs, and others who appear on Cargas' website as supporters. If you know any of them, ask them for me. A few of the ones I know personally are Mary Luckey, Joy Demark, Ken Bielicki, and Stace Medellin.

I await your reply in my comment section (or on this blog's Facebook page, or in an email reply), ladies and gentlemen. A simple yes or no will suffice. Further, I am not likely to publish any comment that extends the personal attacks, ad hominem invective, and outright smears currently raging in this contest. I will not edit your replies. But please don't bother responding if you do not want your answer revealed publicly. As it has always been, silence will be considered acceptance.

One last thing: most of you who have read this far in already know that Bethany Bannister is James Cargas' communications director.

Here's the Lissa Squiers response -- yes, that link is to the real, actual website; accept no substitutes -- that Carl Whitmarsh refused to send to his list, and to Ms. Addertongue's venomous communique':


I have not been responding to any of the various posts by my opponent, and I do not know who wrote this piece sent to you, but I can definitely tell you that I have never been arrested or in jail.  Yes, 15 years ago I paid a $100 ticket for a misdemeanor.  I appreciate the great interest in this current and pressing matter.


I can also share with you that in the Chronicle EBoard interview last week we discussed that I turned down an offer for a contract job with BP during their oil spill because I was morally against their behavior.  Since the person writing to you has referenced the situation but is claiming the opposite of what is true, I can only assume they were in the interview.  Only my opponent and his assistant, Bethany Bannister, were there.  Possibly they were having hearing trouble that day.


And I can assure anyone that is interested that I am in full compliance with my contribution and expenses paperwork.  I have assured my opponent several times that this is the case, but he cannot seem to understand that I filed in the second quarter, once I passed the threshhold for reporting.  Numerous reporting documents can be found online by anyone that searches correctly.


I would like to thank everyone for their interest in these matters and say that I am extremely flattered they are so interested.  Especially Hector Carreno for buying my name as a website domain on July 11, kindly provided as a link in ms. 'snaketongue's' missive.  For the last ten days my opponent's campaign has been running a website under my name, even copying the header from my campaign website to make it look the same.  I hope they have enjoyed their endeavor to share their opinions in this manner.


That's a lot nicer than I would have been had it been me, that's for sure. But then I'm not a candidate for office. Nor am I a communications director for a campaign.

Nor do I publish my opinions -- and my research, and the cartoons lampooning the powerful, the greedy, and the corrupt that are drawn by professional artists -- under aliases or fake names.

Full disclosure here: "PDiddie" has been my nickname, assigned to me by subordinates and peers in a previous profession, since the late '90's. Even when Sean Combs dropped the 'P', I didn't. And 'Hussein' has been my adopted middle name since 2008, and will be as long as Barack Obama lives in the White House.

All that I am, for this purpose and your consumption, is a dude with a blog. And an occasional volunteer for a few political campaigns that meet my criteria for good government: progressive, ethical, and honest.

And I'm probably going to keep doing both of those things for as long as I am able. Without remuneration, and without fear of retribution.
Posted by PDiddie at Wednesday, July 25, 2012

As I expected, the people have "spoken".