Pelosi’s announcement came after months of infighting on the topic within the caucus, which split largely between those in safe districts and those who helped hand the House to the Democrats in November, with Pelosi siding with the latter group throughout. However, north of two dozen House Democrats have come out in support of an inquiry since news emerged that Trump allegedly pressured Ukrainian President Volodymyr Zelensky to investigate Vice President Joe Biden and his son Hunter Biden (The Hill).

Opening an inquiry was as far as Pelosi would go on Tuesday. According to three House Democrats, she would not promise a floor vote on impeachment, a step some House Democrats have sought.


The polling is still not supportive ...

According to a Monmouth University poll taken in August, 59 percent of voters were against impeaching Trump, with 35 percent in favor of doing so. However, the poll was taken well before the Ukraine information came to light and in the aftermath of former special counsel Robert Mueller’s testimony in late July.


And this Reuters poll, fresh out of the oven, shows public interest in impeachment falling: 37% support the Congressional inquiry, 47% against.  Forty-four percent say they have heard little or nothing about the Ukraine story.

There won't be regular reports here on this topic.  This blog don't play like that.  Plenty of others do, and I link to them in the right hand column.  I will say this:

The path to ejecting Cheetolini is laced with landmines for Team Donkey, which is why Pelosi has been so reticent to undertake it.  Republicans, starting at the top, seem to believe it's their road to victory next year, and this would be evidence of that (to me).


Add to this day's eye-popping news: The Republican-controlled Senate, led by Mitch McConnell, is unanimously calling on the whistleblower complaint to be immediately provided to the intel committee. https://t.co/rDKbDC7O9y
— Matt Viser (@mviser) September 24, 2019


Senate Democrats, on the other hand, are a bit divided.

Joe Biden -- and his son, Hunter -- are at the heart of this matter.  Previous reporting had suggested that Biden used improper influence to remove a Ukrainian official who was -- allegedly -- investigating the company Hunter Biden was working for.  The problem for Biden is that there is video of him bragging about it (transcript here).  A variety of media sources say that while this is 'unsavory', it's just business as usual in DC.  The problem for Trump is that he tried -- via Rudy Giuliani -- to make something out of it, and Trump's call to the Ukrainian president, his actions beforehand, and the person who blew the whistle are now the focus of the impeachment inquiry.

So as Trump likes to say: "we'll see what happens".

Aides to 10 Democratic candidates acknowledged the internal strain in interviews with POLITICO, stressing they need to avert a repeat of 2016, when Trump capitalized on Hillary Clinton’s use of a private email server. Several expressed sensitivities around the candidates saying anything that could be construed as helping advance Trump and his allies’ story lines. Yet the candidates and their aides have mostly tried to turn the conversation back toward Trump’s actions, rather than speaking up for Biden.

Part of the tension stems from the reality that much of the field needs Biden’s campaign to collapse. But it would be poor form -- and could come off as un-American -- for a rival campaign to look like they’re capitalizing on Trump’s gambit. Warnings have come from some unlikely quarters: The Intercept, a liberal publication that's been critical of Biden’s campaign, carried a column by the writer Robert Mackey under the headline: “Reporters should stop helping Donald Trump spread lies about Joe Biden and Ukraine.”

Mainstream media is excited about Liz Warren getting a leg up on Bernie Sanders -- and Biden. The Hill's Reid Wilson gives us takeaways from last weekend's Steak Fry in the Hawkeye State.

What made Warren the leading contender in Iowa, even before Selzer's poll, was her slow and steady rise -- and the room she has left to grow. Momentum matters in politics, and Warren has spent nine uninterrupted months building hers.

Look beyond the top-line numbers, which have Warren leading Biden by a statistically insignificant 2 percentage point margin: Seventy-one percent of Iowa Democrats say Warren is either their first or second choice or that they are actively considering supporting her. That's 11 points higher than Biden, 16 points higher than Mayor Pete Buttigieg and Sen. Kamala Harris, and, crucially, 21 points higher than Sen. Bernie Sanders, Warren's biggest rival in the progressive lane.

Selzer calls that combination -- first choice, second choice plus actively considering -- the "candidate footprint," a way to measure support that reflects the fluid nature of a caucus in which voters can pick different candidates in different rounds. That Warren has the largest footprint is important at this stage of the race, she said.

"The footprint signals upside potential," Selzer said in an email.

It might seem premature to call Warren the race's overall front-runner, but history is on her side. The last four winners of the Iowa Democratic caucuses won the party's presidential nomination.

Harris has joked about moving to Iowa. Montana Gov. Steve Bullock pretty much has moved there. Former Rep. John Delaney has camped out there for more than a year.

For all the talk of a nationalized election and a long, drawn-out fight for the Democratic nomination, Iowa is becoming a make-or-break state for a significant number of candidates.

Sen. Amy Klobuchar has to do something in her neighboring state. Sen. Michael Bennet has already spent much of his campaign's funds on television spots in Iowa, apparently to little effect. And Bullock is clear his chances rest on a strong Iowa showing.

Iowa can launch a president. It can also end a bunch of dreams. This year, more than any previous year, Iowans are going to severely narrow a record-size Democratic field.

Selzer's poll showed Warren is seen favorably by 75 percent of the Democratic electorate, a larger slice than anyone else in the field. Almost 70 percent see Buttigieg in a favorable light, two-thirds see Biden favorably, and both Harris and Sen. Cory Booker crack the 60 percent mark.

But Warren was one of the few candidates who saw her favorable ratings rise, up 12 points since March.

Biden's favorable ratings have dropped 15 points since March, when he first announced his campaign. The number of Iowa Democrats who see him unfavorably has doubled to 29 percent.

Sanders has fallen too, from a 70 percent favorable rating in June to 58 percent today. His unfavorable ratings, 36 percent, are the highest numbers of any of the top-tier candidates.


My feeling is that the debates are doing more to winnow the field than the primaries.

-- The fourth debate -- on October 15 in Westerville, Ohio, and sponsored by CNN and the NYT -- now has twelve participants, with Tulsi Gabbard qualifying.

Other candidates have until Oct. 1 to qualify for the event.

Only one other candidate, best-selling author Marianne Williamson, is relatively close to qualifying for the fourth debate. She has already surpassed the 130,000-donor threshold but needs to register at 2 percent or higher in at least three more qualifying polls.

It’s still unclear whether the debate will be held on a single night or split between two nights like the first two debates in June and July.

The DNC has said that it will make that decision after the Oct. 1 deadline.


-- The fifth debate, slated for November, will have tougher thresholds, and there is speculation that second-tier candidates like Castro, Klobuchar, Steyer, Gabbard, and others won't clear the bar.

-- Bullock is raising money in Dallas tomorrow and Houston on Friday.

-- You can be excused for barely noticing that Bill deBlasio removed himself from contention.

New York Mayor Bill de Blasio ended his 2020 bid (last) Friday, saying the party’s rules for qualifying for televised debates had made it hard for him to continue. He failed to qualify for a Sept. 12 debate that featured the 10 leading candidates for the party’s nomination.

"I think this gets to the reality of the debates, first and foremost for me," de Blasio said on MSNBC's 'Morning Joe' Friday morning. "But the bar is so high, so early, that for a lot of us -- clearly some of my fellow chief executives, governors, couldn't make that cut -- its clear to me that's a high bar, and that's one I'm not going to be able to meet. And I think that's the central reason."


-- Cory Booker says he'll be out in a week if he can't get a cash infusion.


It’s an unusual move for a campaign like ours to be this transparent, but there can be no courage without vulnerability. I want people to see where we are and understand that we have a pathway to victory, but I can’t walk it alone. https://t.co/akjhAxjVey
— Cory Booker (@CoryBooker) September 21, 2019


-- Did you watch the Republican candidates debate yesterday?  Maybe you missed it because there was something else going on. 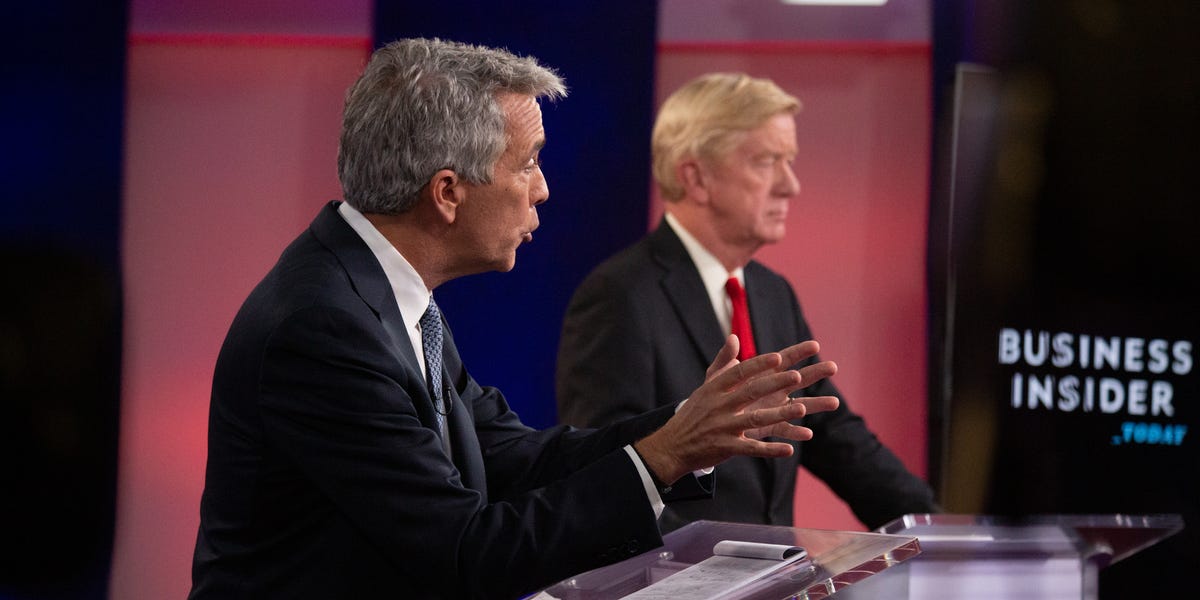 President Donald Trump's Republican primary contenders set the tone right out of the gate: the 2020 race isn't about electing someone else, it's about not electing Trump.

Former Illinois Rep. Joe Walsh and former Massachusetts Gov. Bill Weld took the stage at Tuesday's Business Insider GOP debate, where both argued that Trump is a threat to national security and American values and deserves to be removed from office.

He added: "It's not about issues, it's about Trump."

The president "deserves to be impeached and everybody should keep their boots on top of" Republicans in Congress "so that they follow their constitutional duty," Walsh said.

"We simply can't sit still for this guy, who's a disgrace to this office," he said, adding that Trump engaged in "some combination of treason, bribery, and high crimes and misdemeanors."

It's not the first time Weld has accused the president of treason. Earlier this week, he said Trump's push for Ukraine to investigate former Vice President Joe Biden ahead of the 2020 election constitutes treason and specifically noted that the crime carries the death penalty.

He backed off from repeating that during Tuesday's debate but pointed out that his time in office during the Watergate scandal in the 1970s contributed to his support for Trump's impeachment.

The president declined an invitation to participate in the debate, and former South Carolina Gov. Mark Sanford, who is also challenging Trump for the nomination, couldn't attend because of a scheduling conflict.

-- Hawkins has been vocal in recent days about Net Neutrality and supporting striking GM workers.

Updates here or in a Friday post, relative to their importance.
Posted by PDiddie at Wednesday, September 25, 2019