#DemDebateTSU: who got chopped, who got screwed

(For those missing the reference ...  keep in mind Scarface is running for city council.) 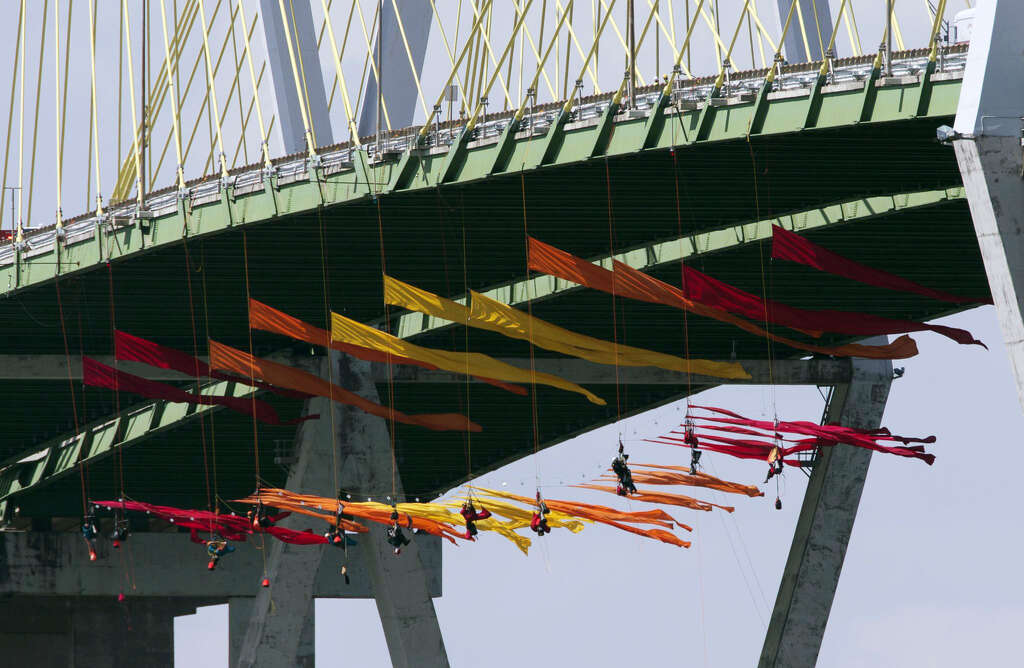 Crews with the Texas Department of Transportation have cleared the last remaining remnants of a Greenpeace USA protest that started shortly after 6 a.m. Thursday and went into the late afternoon.

By Thursday night, all protesters who had rappelled off the Fred Hartman Bridge at the Houston Ship Channel had been arrested, Sheriff Ed Gonzalez tweeted.

Greenpeace USA spokeswoman Valentina Stackl said Friday morning said that by 1:30 a.m., everyone had been taken into custody and were now waiting to hear about charges.


Hang 'em high, said the Khronically Konservative Kommenters.  After seven hours last week of climate change talk, there were no was just one question on the topic last night.  There's always next week.

The consensus will probably be that Julián Castro distinguished himself in Thursday’s debate, thanks to some forceful talk on immigration, a good story about hard ethical choices, and some deliciously salty exchanges with Joe Biden. Biden himself did better than before, which isn’t saying much. There were still painful moments, especially a downright bizarre ramble delivered in response to a question on his racial record; Biden implied that black parents need instructions on how to raise children, told people to “make sure you have the record player on at night,” and then started talking about Venezuela for no reason at all. I continue to believe he is a political liability who should under no circumstances be nominated.

Bernie had some excellent answers on foreign policy and democratic socialism, sadly made less forceful thanks to a hoarse voice. Unfortunately, he was also denied the chance to say anything about climate change, meaning he couldn’t explain the urgent need for a Green New Deal.

Warren distinguished herself as an explainer of progressive policies and effectively replied to the line about people wanting to 'keep their insurance' by saying “I’ve never met anybody who likes their health insurance company.” Kamala Harris continues to duck tough questions about her atrocious record as a prosecutor, Amy Klobuchar continues to offer uninspiring centrist clichés, Beto O’Rourke continues to emphasize guns and racism, Andrew Yang gets ever closer to becoming Matthew Lesko, and Cory Booker continues to be personally endearing without offering any reason to vote for him.


Spot on, except I did not see Warren so favorably.

The senator from Massachusetts started off the night with weak answers on health care, dodging the reality of higher taxes for the middle class and simply refusing to acknowledge that the “Medicare for All” plan she endorses outlaws private medical insurance. As the night went on she got better, appearing passionate and informed.


There were some plaudits but mostly brickbats for the mods.

It’s clear that Democratic debate hosts continue their disingenuous framing of socialism and the left, from asking loaded questions about what distinguishes Bernie Sanders from Venezuela’s Nicholas Maduro to repeating conservative talking points about Medicare for All. The debates are becoming increasingly redundant, with few revelations materializing among them. However, moderators Linsey Davis and Jorge Ramos asked tough questions that were a welcome shift from the tone of previous debates.

Davis unflinchingly confronted Biden on his positions on racial equality and disinterest in reparations, and she directly called out Kamala Harris’ criminal justice record. Likewise, Jorge Ramos keyed in on Biden’s support for the Obama administration’s deportations of 3 million people.

As the debate was 3 hours long, there should have been plenty of time to follow up on these questions, instead half of the first hour was spent re-litigating Medicare for All. While there were no clear winners, and the frontrunners’ positions will likely change little after tonight, at least a few pointed questions forced some to contend with their records.


I agree that the two Texans, particularly Beto, had the best night.

He managed to turn the mass shooting in his hometown into a broader, bolder argument for what the country needs and why he can provide it. That memorable line -- “Hell, yes, we're going to take your AR-15, your AK-47” -- came after he described how a 15-year-old bled out over the course of an hour because there weren't enough ambulances to get to the wounded. It’s part of his new model of throwing caution to the winds. To me it makes him a stronger candidate. But I’m not a middle-of-the-road suburban voter.


The gun nuts in the Lege erupted.  And with Greg Abbott and Ted Cruz both creeping away from Dan Patrick to his right, the momentum for pushback has been established.

Another big moment for O'Rourke came at the end of a riff on racism, when he said of Trump: "We have a white supremacist in the White House and he poses a mortal threat to people of color across this country."

O'Rourke's campaign was ready for a spike in Google searches and social media traffic that followed. His website was overhauled to feature a menacing red image of Trump with the words "The President of the United States of America is a white supremacist" -- as well as lots of links to Trump's racist comments.


I saw lots of whining about Castro being mean to Biden, which Boot Edge Edge carped about from the stage.   Castro slapped him down, too.

Buttigieg cut in, saying, "This is why presidential debates are becoming unwatchable."

He continued: "This reminds everybody of what they cannot stand about Washington. Scoring points against each other, poking at each other."


This is exactly what any presidential nominee wants in a veep.  Bravo to Castro, and blue stars to both Beto and Julián.  It's about time.

I could really do without any more of Yang, Klobuchar, Mayo Pete, and Karmala, but we're stuck with them for awhile longer.  Steyer will be there in October, and Tulsi is just one more poll away.

Booker damned both Biden and Castro with faint praise, or something.


Cory Booker just sat down with @ErinBurnett and @DanaBashCNN on CNN, and they asked about that Castro/Biden moment, when Castro seemed to suggest Biden was old/not all with it. Really remarkable response from Booker below pic.twitter.com/3UzyNStmNU
— Rebecca Buck (@RebeccaBuck) September 13, 2019

(Sanders and Warren) have been reluctant to go after each other when sharing the debate stage; in fact, they frequently end up agreeing with and supporting each other. The pair had a significant disagreement on Thursday night, though, when Warren swung a question about gun control around to announce her stance on the Senate filibuster.

"We have a Congress that's beholden to the gun industry," Warren said. "And unless we're willing to address that head on and roll back the filibuster, we're not going to get anything done on guns."

But The New York Times' Astead Herndon observed that Warren coming out against the filibuster was strategic in that it "force[s] Bernie into a rare place of being an institutionalist."


Here's what's most interesting: establishment Democrats scoff at a President Sanders' chances of passing any of his agenda without at least something like reconciliation.  So this development is worth observing.  Sanders, with his decades of Senate experience, may have a trick up his sleeve, or may know something Warren, an upper chamber rookie, simply doesn't.

To the macro point:

I do not believe Warren can defeat Trump.  (I'm all but certain Biden can't.)  I find her outreach to the Democratic elites disingenuous to her presentation; it reveals her fauxgressive façade.  Bernie, in fact, is going to have to take the gloves off and go after her.

More for another day.
Posted by PDiddie at Friday, September 13, 2019