There will be no cursing, Beto.

I won't be on the scene this evening (despite receiving a very special invitation, details of which I shouldn't disclose) due to lingering balance and audio difficulties.  I also turned down multiple watch party invitations.  So I'm viewing at home, just like you.  And live-Tweeting, to your right; with a morning-after synopsis tomorrow. 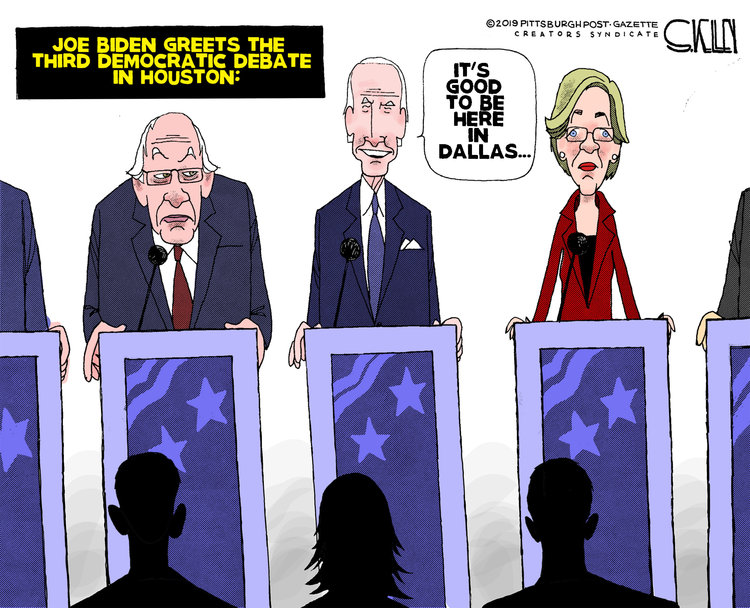 Everybody read last week?  I'm trying not to laugh any more at this kind of thing.  Here's an update to what I posted there:


Biden is NOT okay. Many noticed the subconjuctival hemmorage he got at the Climate Town Hall. Did you know that seniors with SH are 70% more likely to have a stroke in the near future?


The Dementia Train is finally showing signs of slowing down.

Former Vice President Joe Biden’s lead in the Democratic primary has been cut in half, according to a new poll out Wednesday, and while Biden still maintains his grip on front-runner status, the CNN poll shows Sens. Elizabeth Warren and Bernie Sanders incrementally creeping up on him.

The CNN poll shows a drop of 5 percentage points in support for Biden in the past three weeks, to 24 percent from 29 percent. The national survey of Democratic primary voters also saw Warren jump Sanders for second place, though the two are still within the margin of sampling error at 18 percent and 17 percent, respectively.


Texas Democrats are, as usual, a little slow on the uptake.


And this one's for that jackass at the beauty shop.

There are lots of reasons for not voting for WAR-ren piling up; it's just that EJ Bob doesn't have the right idea about what they are.

Elizabeth Warren has a small advantage among women voters, but there’s no guarantee that women will rally behind a female candidate. https://t.co/VAgdzEq4Ho
— FiveThirtyEight (@FiveThirtyEight) September 10, 2019


So with Biden and Warren onstage together for the first time, there ought to be some friction.

Over this past weekend in New Hampshire, all of the major candidates -- including Biden and Warren -- were in the state for its Democratic Party's annual convention. Which is where, from the stage and with thousands of loyal Democrats cheering her every word, Warren said this:

"There is a lot at stake, and people are scared. But we can't choose a candidate we don't believe in because we're scared."

If you think a) that line was accidental or b) it wasn't aimed directly at Biden's electability argument, there's a very hot video company named Blockbuster I'd like to sell you.

But Biden has prepared a counterargument.

"I expect you'll see Biden echo an important point he made during last week's climate forum: We need more than plans, we need a president who can deliver progress on the most pressing issues facing Americans -- which Joe Biden has proven he can throughout his career," a Biden adviser told CNN earlier this week.

Plans are not enough is, again, a very purposeful shot at Warren -- even though her name wasn't invoked by the adviser -- who has premised her entire candidacy on the idea that she has a detailed plan for anything and everything.

Biden's team sees the contrast between his years of fighting and winning political battles and Warren's years spent in academia and her relative lack of legislative accomplishments during her seven years in the Senate.

One of these two candidates has done things and one has talked about what she would do, goes the Biden argument.


*yawn* Sometimes Cillizza is so dense.

One of these two candidates has his right foot in the grave and his left foot on a banana peel, and the other has stolen all her plans from Bernie and watered them down with capitalism.

The sooner Biden exits, the sooner Democrats can have the real debate.

So here's where I might have posted a bunch of excerpts and Tweet embeds about Bernie being ignored or dissed by corporate media, as per usual.  I'll just do this one.


A new poll has @berniesanders outperforming every other Dem and beating Trump by 6 in TEXAS. Oil loving supposedly socialist hating TEXAS! I think we are owed an apology from everyone who ever pushed the centrist electability gospel. FULL: https://t.co/muCopTlKOa #rising pic.twitter.com/jSFA4jAScH
— Krystal Ball (@krystalball) September 11, 2019

Now is as good a time as any to reference the Three Stooges.


With the list of Republican challengers against the president growing, the small field of long-shot candidates is set to face-off in their own primary debate later this month -- sans Trump https://t.co/IIJJbyj9aJ pic.twitter.com/aQ2xAbOXYl
— ABC News Politics (@ABCPolitics) September 11, 2019


More on their debate here.

The debate will be held as part of Business Insider Today, a daily online news show from the publication on Facebook's video on demand service.

"President Trump was invited to participate but has not responded," Business Insider said in a press release Tuesday afternoon announcing the event.

Trump on Monday indicated he would not debate the Republicans who have announced bids to challenge him for the 2020 GOP nomination, pointing to their low polling figures and dismissing their bids as "a publicity stunt."

Business Insider said it would hold its debate at its New York City headquarters. The event from Business Insider, a company that launched in 2007, will be moderated by Insider CEO Henry Blodget, politics editor Anthony Fisher and columnist Linette Lopez.


I'll be more interested in this than whatever Bathroom Book Collector or Boot Edgex2 or Copmala or Last Chance Bob or Yank have to say tonight.

Booker and Castro, on the other hand, are my preferred choices for the Biden vote migration.  And not just here in Deep-In-The-Hearta.

Castro, who held a “Castro Country” rally Monday night in Houston, remains confident he can win his home-state primary once he proves himself in the earlier states.

“My plan is to work hard so that I can do well in Iowa, I can gain momentum and then by the time we get to Texas, it's going to be a different ballgame,” Castro told reporters after the rally. “What we see now in the polling is simple theory, because by the time we get to March 3, there's going to be a lot of changes in this race and I know I need to do well before Texas so I can win in Texas.”

... Cory Booker headlined the Texas Democratic Party’s yearly Johnson-Jordan Dinner a year ago in Austin. That appearance seemed to be on the mind of the Travis County chair, Dyana Limon-Mercado, as she introduced Booker last month at a small-dollar fundraiser for his campaign in Austin.

Booker, she said, had been “paying attention to Texas when a lot of other people weren’t.”

For his part, Booker pledged to be the kind of party standard bearer who works hard for down-ballot candidates, mentioning the U.S. Senate race next year in Texas. “And if I’m your nominee, I’m back down here helping to organize so that I win Texas and you win Texas,” Booker said.


I did finally figure out why Beto is polling so strongly with Latinxs: a handful of small reasons.

1)  Beto speaks Spanish fluently and Castro does not.  (To be clear, this can be a mixed bag, and the difference, as with Biden's support among African Americans, is generational.)
2)  Beto's actions, post-El Paso massacre, have been gratefully acknowledged.
3)  He's the only candidate doing this (so far).

This is a big switch from his 2018 Senate campaign against Ted Cruz, if you recall.

-- We have been reading for some time now that Beto O'Rourke's fate lies in the hands of these intractable non-voting, mostly RGV-dwelling brown voters.  But so does that of Gina Ortiz Jones, a little further up the Rio Grande along the Big Bend, and it appears she will suffer the same fate as Pete Gallegos did in SD-19's special election last month.


Here's the best thing I read about Gabbard this week.


Heading for the finish line with Mike Gravel and Howie Hawkins.

(On September 9) the Mike Gravel campaign urged supporters to back the Howie Hawkins campaign’s efforts to qualify for federal matching funds. Hawkins is running for the Green Party’s nomination for president.

Gravel had previously endorsed Sen. Bernie Sanders and Rep. Tulsi Gabbard in the Democratic primary. In Gravel’s email today he also urged support for Howie Hawkins in the Green primary.

Hawkins has admired Mike Gravel since he read the Pentagon Papers into the Congressional Record on June 29, 1971. Gravel read the papers into the record when the New York Times was enjoined from publishing them and the issue was before the US Supreme Court.


More here from David Collins, who was with Hawkins this past Monday evening here in Houston, and photos and a post from the Dallas meetup from Gadfly.  Green presidential candidates will debate later this month.