He can console himself with the thoughts of $41 million simolians dancing in his head, and a few targets in the House to shoot them at.

Three for twenty is a .150 batting average, not quite Mendoza-line production.  He might be able to get it up to .250 by next Wednesday.  Again, we'll have to wait and see. 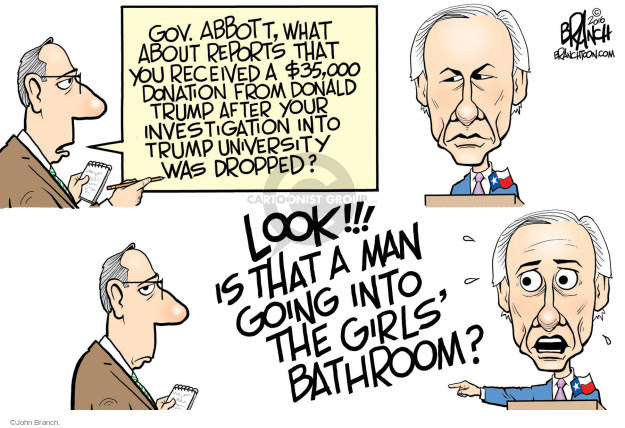 Abbott has been primarily motivated by avoiding a primary from his right *coughDanPatrickcough* and by whatever it is that his platoon of well-heeled yokels writing him six-figure checks wants, as revealed by the sage RG Ratcliffe at Burkablog.  That's probably something like 'no men in women's restrooms' in Doss, Gillespie County.  (Note the blase' attitude of those quoted in that article associated with million-dollar campaign contributions, as if the ramifications of Citizens United were completely unheard of.)  Tilove at First Reading asked a good question, but the truth is that Abbott doesn't need the Wilks boys' money, and perhaps down deep in his shriveled little heart doesn't really care for their extremist politics beyond pandering to it.

(U)ltimately Abbott, as far right as he has traveled and is prepared to travel “to stay ahead of the needle,” isn’t really entirely politically or temperamentally in sync with Michael Quinn Sullivan and Dan Patrick and the House Freedom Caucus and the Wilks brothers, and they all know that.

He is the governor of Texas seeking a second term and he is better off with a Texas Republican party that is not tearing itself apart.

He depends on donors and support from people for whom Straus is not Satan and Patrick is scary.

Ted Cruz executed a remarkably strong race for president running from the furthest right, most disruptive reaches of the party. But that was pre-Trump.

Post-Trump, it seems likely the party and the country may be looking for a presidential candidate who is not all about endless conflict and, if Abbott is indeed interested in being that candidate, he may be better off without so much as a straw of deer semen from the Wilks brothers.


Some people say that his late (in the regular session) hard-right turn might hurt him to some degree with the business community, blahblahblah.  Don't think so.  Not as long as Mr. International Leather and the Berniecrat Tom Wakely are all Texas Democrats can muster.  I remain of the opinion that only Joe Straus running as an independent -- and the Democrats bailing out of the race altogether, lest their straight-ticket voters spoil the strategy -- can defeat Abbott in November of 2018.

Jim Henson and Joshua Blank have a more favorable take on the special and its ramifications to Abbott and Patrick than is currently in vogue in Democratic circles.  Whatever else happens, Abbott's keeping that list, you know, and so is DisEmpower Texas and Dr. Steven Hate-ze.  So Straus, should he run for re-election and then for Speaker again, had better be marshaling his forces.  And he had better be ready to help Byron Cook and the rest of his lieutenants in the Texas House.

The sane parts of Texas cannot afford having him lose.
Posted by PDiddie at Saturday, August 12, 2017

I don't think Dan Patrick will do a late primarying on Abbott. Challenging Cornyn in 2020 would not surprise me, though. Cornyn had a multi-challenger 2014 primary and only got about 60 percent of the primary vote.

Patrick won't primary Abbott now. Had Abbott failed to back up his call for the far-right-of-far-right agenda, it would have been possible.

Patrick is not interested in going to Washington. Cornyn will draw another Stockman-ish challenge from the starboard fringe, having failed to repeal Obamacare. Too early anyway to speculate about that. I'm much more interested in Ted Cruz v. Beto O'Rourke.

Patrick might have his own primary challenge to contend with in 2018.

Look at all the political careers he ended four years ago: Dewhurst, Jerry Patterson, Todd Staples. Even Susan Combs, whom Trump has recently named Asst. Secretary of the Interior, could make a comeback. She was ag commissioner before she was comptroller. All of those look like Straus-styled moderates to the lunatics currently running the asylum. Ken Paxton and Sid Miller desperately need to be turned out, and the Democrats sure aren't capable of doing it.

The TAB and other corporate interests with money to invest will be looking for reasonable alternatives to Patrick and Paxton and Miller, and should be screening potentials to fund even as I type this.

You're prolly right that Patrick doesnt want to go to DC. Of course, he could back somebody saner, yet nuttier, than Stockman. Big John's still vulnerable.

And, Combs? I think she'll keep her Washington sinecure.

And, while the TAB has money, so do the wingnuts, as you well know.

Color me kooky, but I get the sense that Trump's (and Cruz's and Patrick's) style has reached its sell-by date with a critical mass of GOP primary voters.