Not reading this anywhere else.

The appeal will be filed this week, unless the state requests — and is granted — an extension on a three-day deadline imposed by the district court's ruling, Kayleigh Lovvorn, a spokeswoman for the Texas Attorney General's office told the Caller-Times Wednesday.

The San Antonio court gave the state a three-day deadline to indicate whether the legislature would convene to consider redistricting, a move Abbott called "astonishing."

First, I thought these appeals went through the Fifth Circuit before they got to the Supremes (thus the strike-through in yesterday's).  Second, it is a little wild that the three judges who invalidated the constitutionality of the two Congressional districts which Blake Farenthold and Lloyd Doggett currently represent would give the state until this Friday to decide whether to meet with the plaintiffs and start drawing new maps on the day after Labor Day ... or keep fighting it out in court.

Surely it will continue to be the latter. 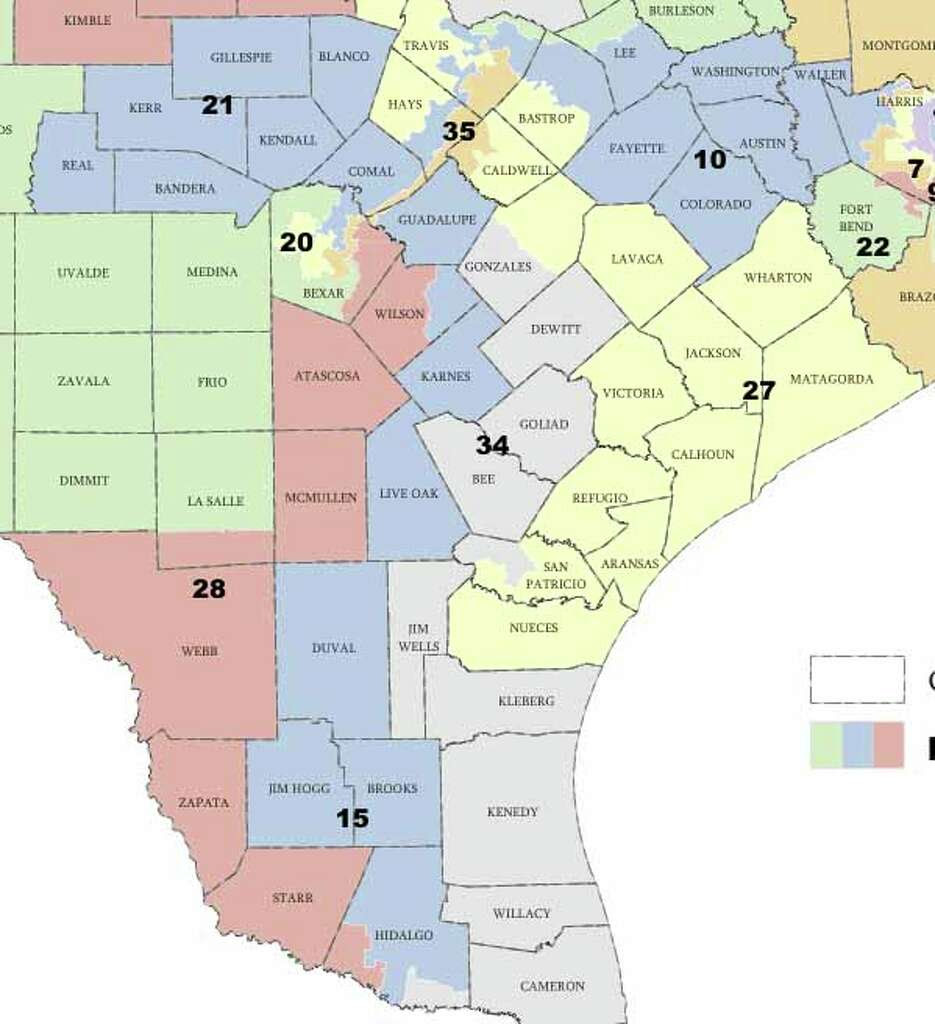 The federal judges ruled Congressional Districts 35 and 27 violated racial discrimination prohibitions in section 2 of the Voting Rights Act of 1965 and the 14th Amendment of the U.S. Constitution.

The 107-page ruling, handed down in San Antonio, could lead to a battle to redraw the districts in time for the 2018 elections.

If Texas does not respond within three days and the Supreme Court does not intervene, the two sides are scheduled to meet Sept. 5 to begin drawing new maps, the ruling states.

Or Abbott's appeal to Justice Sam Alito is taken under advisement by him and he alone decides, or he refers it to the full Court, in which case we're back on the slow track.  If Abbott's appeal is not granted, then Abbott calls another special session for redistricting (rather than leaving it to a squadron of lawyers from the state and MALDEF, etc., and under the supervision of the federal judges of the Western District of Texas).  A special may be coming anyway, since Goobnur Wheels is now grousing about his agenda being derailed by Joe Straus.

While I was blogging the above, Meagan Flynn at the Press posts an update, beating all the corporate news media outlets and Kuff and the rest of those who are usually on top of these things.  Maybe later today, or tomorrow morning at 5 a.m. in Kuffner's case, with whatever the Chronic or the TexTrib have to say, preceded by "Wow' or something similar.

The ruling means both maps will need to be redrawn in time for the 2018 election, and that lawmakers can't kick the can down the road until the next session. The federal judges gave Texas three days to decide whether it wants the court to redraw the maps for it — or let the Legislature do it. Which would require a special session.

Expect to find out by the end of the week whether you'll have to watch lawmakers tear up the state Capitol all over again this fall. Who knows, given Abbott's philosophy during this past special session was cram as many bills as possible into 30 days, maybe the bathroom bill will even make an appearance on another ambitious agenda.

Update: KUT touches base with Brennan Center attorney Michael Li, who is also advising the plaintiffs, and he explains the current situation as I have.

“It’s possible that everything gets put on hold until the Supreme Court decides, but it’s also possible that the court lets that go forward,” said Li ... “I think everyone is sensitive with the close timing of the election and everything that it may make sense to go ahead and redraw the maps now.”

“The question now is who redraws the maps.”

“So the normal practice is that a Legislature gets the first shot at redrawing maps," Li said, "and the court has given the Legislature that shot." If they don’t agree to hold a special session to redraw the maps, then the state and plaintiffs go back to court for a hearing in September to hash it out.

The court also still has to rule on the statehouse maps, which could also delay a special session.

Li said legislators will probably want to wait to see if they have to redraw both sets of maps before going into another session. He said it is possible, however, that all this could be sorted out in time for the 2018 elections.

“If all the cards align, and the changes aren’t that massive, then it’s possible that maps could be in place by September or early October,” he said. “But right now everything is up in the air.”


Update (8/18, late p.m.): There will be no special session to address redistricting ... for now. Governor Hell on Wheels reserves his right to call one before 2019 if the Supreme Court lets the air out of his tires.  Ken Paxton's pompous dismay at having judges draw maps -- i.e. his disgust at the governor for failing to take matters into his own hands -- is duly noted for the record.
Posted by PDiddie at Thursday, August 17, 2017

The Lege & GOP caucus within took a pass on redistricting during the regular session after the previous panel of judges' ruling. I haven't seen anything that will change that; in fact, if the SCOTUS appeal fails, what I've seen is that Abbott and Paxton both prefer the continued slow-walk through the courts.

They might hope they can stall past 2018 primary time and dodge the blame as well.

And Farenthold looks almost as ugly in that suit as in his pajamas.

That is certainly Greg Abbott's take. Mine is that this is something like the seventh time that various judges and courts have struck down those 2011 so-called interim maps. Alito now takes the 5th Circuit appeals and not Scalia, so it's possible he could have a different take on that kind of precedent, as it were. We should know something later today (Friday).