Buy us another round, Governor? 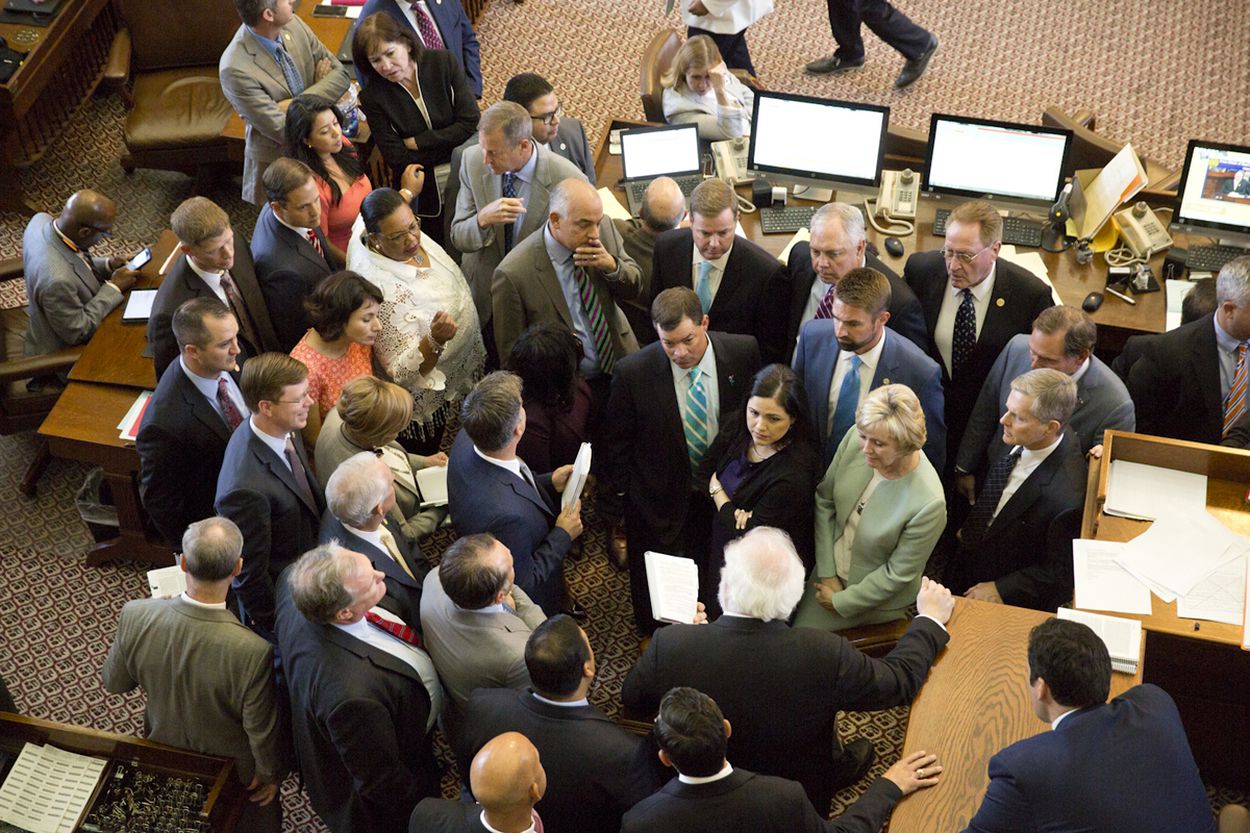 Texas House members huddled near the dais on Aug. 15, 2017.
Thanks to Marjorie Kamys Cotera at the TexTrib for the pic.

The special session of the Legislature came to an abrupt end Tuesday night, a day earlier than expected, when the Texas Senate adjourned without acting on a House-passed version of a property tax bill.

The House began the late-session drama when it unexpectedly closed the special session with one item pending — a conference committee on Senate Bill 1, which would have required larger cities and counties to get voter approval for property tax increases.

Senate Republicans wanted automatic elections for increases of 4 percent or more. The House settled on a 6 percent trigger, and by adjourning early, House leaders told the Senate to take the 6 percent rate or leave it.

Later Tuesday night, the Senate chose to leave it.


The RWNJs are up in arms tiki torches, but Greg Abbott is signaling 'success'.

"Our office believes this special session has produced a far better Texas than before," said Abbott press secretary John Wittman.


If you're a woman who wanted a choice as to whether to give birth or not, or even be able to have your insurance company pay for your choice under standard polices ... no.  Not at all.

For his part, Gov. Greg Abbott was silent on the session’s end. He signed three bills on Tuesday, bringing the total number of special session bills he’s signed to five. Four more bills await his signature, including a House measure relating to tree regulations on private property that’s a far cry from what he demanded and similar to a bill he vetoed in June. The only other bill to reach his desk relating to reining in municipal powers was one that restricts the annexation authority of cities in large counties.

Likewise, lawmakers didn’t pass bills restricting transgender bathroom use, an emphasis of social conservatives, or limiting state spending, a cause of fiscal conservatives.

Abbott has asked lawmakers to pass bills related to 20 issues. Just nine and a half of those reached his desk.


A better batting average than I predicted last Saturday, but the ultracons are still howling. We'll have to wait for the governor to decide whether his wheelchair seat cushion feels too warm after he gets off the phone with the Porters.  They don't stay up late, but they do get up early to feed the chickens and milk the cows.

Jane Nelson (Senate Finance chair) says we can do whatever we want; she's going to Italy.  Not quite Davy Crockett at the Alamo.  Not even Billy Bob Thornton in the movie, for that matter.

I'll go out on a limb and predict that Abbott feels comfortable enough with his $41 million to declare victory and go home, leaving Dan Patrick to go after Joe Straus, et.al. now and next spring.

(Patrick) placed the blame for almost all of Abbott's failed special session priorities on Speaker of the House Joe Straus.

"Thank goodness Travis didn't have the speaker at the Alamo," Patrick said. "He would've been the first one over the wall."

"We missed some major opportunities, but what I'm most upset about is the House quit tonight," he said. "With 27 hours to go, they walked off the job."


Sounds like the proverbial line in the sand to me.  It's possible that the federal judicial panel that found two Texas Congressional districts unconstitutional yesterday compels a special session before 2019 if the Supreme Court ultimately agrees, and in turn orders a fix before elections in 2018, but we'll have to wait for that on the usual unpredictable timeline.  The Fifth Circuit is the next stop, whoever loses appeals again to the Supremes, and even on the fast track the SCOTUS doesn't take the case under consideration until the high court reconvenes on the first Monday in October.  It's possible that any redistricting simply waits until the legislative session in 2021, as the regularly-scheduled decennial mapmaking process occurs.

So if I had to guess right now ... no more specials.  But I could be wrong.  Update (8/17): I'm probably wrong.  Read this post for the latest on how the redistricting decision affects the probability of another special session.

Ross Ramsey at the TexTrib has more inside baseball.
Posted by PDiddie at Wednesday, August 16, 2017

I agree that he was just along with the ride for Goeb on the bathroom bill, but the property tax rollback rates was supposably a big deal for him, and he still declares "success."