So how about those Russians? 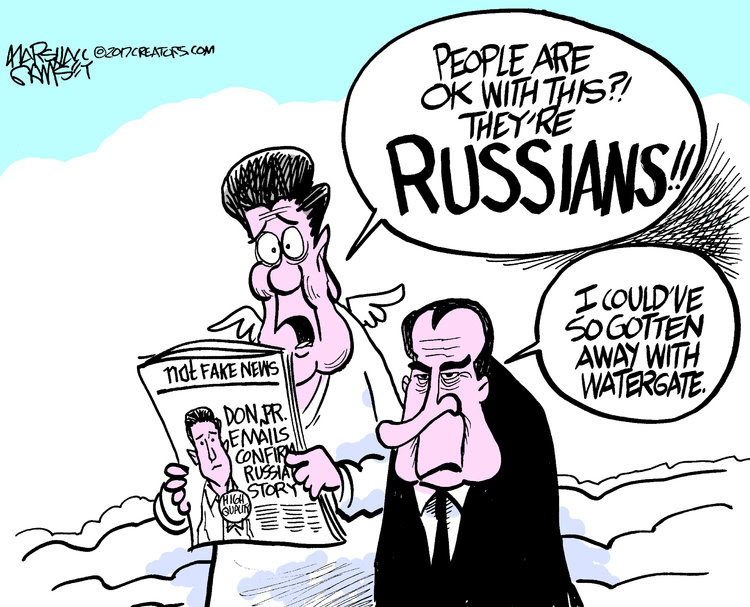 Fake news alert: Neither Reagan nor Nixon are actually in Heaven.
Collusion is a pretty huge deal, as most of us know, but not if you're Sean Hannity or the millions of MAGAs who refuse to accept the truth being told elsewhere on teevee.  But the White House knew it was time for an intervention, so they called in the God Squad.

Such an honor to pray within the Oval Office for @POTUS & @VP . pic.twitter.com/JrDOSJyFeN
— Johnnie Moore ن (@JohnnieM) July 12, 2017

Pastors at the meeting told The Post that the group discussed issues such as religious freedom, judicial nominees, criminal justice reform and the Affordable Care Act. Vice President Pence and Trump's son-in-law, Jared Kushner, were also present at the prayer gathering.

Presumably the laying of hands did not involve former Rep. Bachmann's nether region.  One question: if the pastors discuss judicial candidates with the president, then has the wall between church and state been torn down (to be shipped to the southern border)?

The laying of hands is a symbol of God's authority, practiced in many evangelical denominations. Jesus and his apostles used the sign throughout the New Testament to bless and heal people and to commission messengers of the gospel.

Pastor Rodney Howard-Browne posted photos of the meeting on Facebook, and said he prayed for "supernatural wisdom, guidance and protection" for Trump. "Wow — we are going to see another great spiritual awakening," he said in the post.

Trump, who enjoyed wide support from evangelicals in the presidential election, is a self-described Presbyterian but does not attend church regularly. In January of 2016, Trump drew criticism from many evangelical Christians for his pronunciation of the Biblical book 2 Corinthians as "two Corinthians" instead of "Second Corinthians".

Trump in fact received more than 4 out of every 5 votes from white evangelical Christians, despite the pussy-grabbing and the Two Corinthians and all the rest of his failings as a Christian.  His religion, as practiced on Sundays, is the Church of Golf.  But his God is money.

This is going so bad so fast that Paddy Power has changed its odds of impeachment.

PaddyPower, an Ireland-based betting site, has seen more users placing bets on President Trump being impeached before the end of his first term, bringing the site's total odds of the President being shuffled out of the White House by 2021 up to 60%—the highest it’s ever been, according to company spokesperson Lee Price.


"[President Donald Trump] had gone quiet over the last month, and we were starting to wonder if he might have ridden out the initial controversies – but he’s back with a bang today,” Price wrote in an email to Fortune Wednesday.
Not only are PaddyPower bettors increasingly putting their money on Trump being impeached before his first term is over, but they are also betting on him being impeached as soon as this year, bringing those odds up to 33.3%. That's despite the fact that impeachment proceedings are usually lengthy.

"Everyone is betting on the 'yes' side of impeachment," Price said, saying hundreds of thousands of pounds had been placed on that bet.

This is your clue that the Euros gambling on this outcome have no idea what they are doing.  Use that conclusion as you like; I'm not giving any financial advice here.

That said, PaddyPower is hardly a foolproof predictor. Another betting website called Predict-It sees just a 9% chance of Trump being impeached this year, down from the 30% chance it saw after then-FBI Director James Comey was fired in May.
So the euphoria of a potential windfall may be short lived for those PaddyPower bettors, most of whom are unlikely to be Americans. Although it's not just betting sites weighing Trump’s odds of impeachment since news of Trump Jr.'s Russia meeting.
"We believe the risk of impeachment proceedings is now higher than before," CitiBank’s Tina Fordham wrote in a note on Wednesday, though she added that impeachment is still unlikely. "It would be highly unusual and indeed likely politically costly to the party's electoral prospects to pursue impeachment proceedings against a president of their own party, particularly with Midterm elections a little over a year away."
Meanwhile, California Democrat Rep. Brad Sherman placed a different kind of bet when he filed an article of impeachment against President Trump Wednesday.

Trump won't be impeached by a Republican Congress.  Trump may be forced to resign at some point sooner than later, and the GOP would just be thrilled with Mike Pence.
Posted by PDiddie at Thursday, July 13, 2017

Masha Gessen has one of the best takes on the Don Jr: A low-wattage con man got punked by smarter ones: http://www.nybooks.com/daily/2017/07/12/waking-up-to-the-trumpian-world/