Got any Democrats in mind for governor in 2018?

Because it sure doesn't seem like the Texas Democratic Party does.  The most recent post on the topic that Google returns for me (if you don't count the Castros' turndowns in May) is dated February 9 of this year -- five months ago -- and is a bit of rumor and off-the-record chat collected by the TexTrib about a private meeting at the end of the previous month. 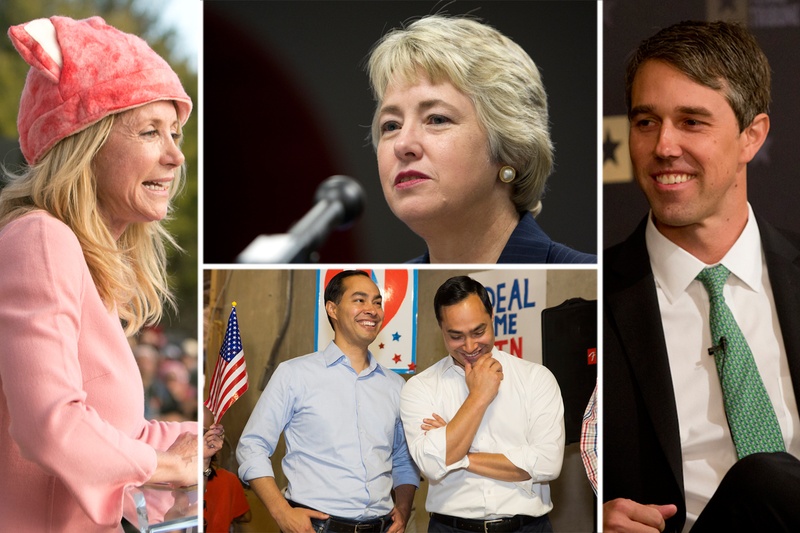 In late January, a high-profile forum for candidates vying to be the next Democratic National Committee chair brought hordes of Democrats to Houston ready to plot the party’s national future. But for Texans in the party, the more consequential meeting may have occurred the day before in Austin.

A tight-knit group of Texas Democratic leaders traveled to the state capital that day to begin preliminary conversations about the 2018 midterm races.

Their main agenda: mapping out a strategy for the 2018 midterm elections.


You should already know what Collier and O'Rourke have decided to do.  It's highly doubtful Davis (who lives in Austin now) will make another bid for the Mansion, and Anchia and Turner have 'special session' on the brain.  Parker wants to run for Harris County Judge, but not if Ed Emmett is still there, and he's still going to be there in 2018.  Of these, perhaps Turner or Anchia will be so frustrated after the special and Abbott's heavy hand that they'll throw their hat in.  Some things haven't changed in the last six months, however.

The expectations in the room were not soaring but were cautiously hopeful. That optimism was mostly rooted around one person: President Donald Trump.


Uh huh.  Maybe Cliff Walker can find Betsy Johnson, clean off her combat boots, and keep the Greens from getting to 5% again.  (The GP already has to petition for ballot access next year, thanks to the two afore-mentioned in 2016.)  In similar vein, the two most vulnerable statewide Republican incumbents have also drawn no challengers to this point.


So here's my prediction: as in 2006, there will be a few populist figures with little to no experience in elective office step up; the party won't find any money or other support for them, and ... you can probably guess what will happen.  Then in December of 2018, as all eyes turn to the presidential tilt in two years, the chairman of the TDP will stand up at a meeting of the SDEC and say, "It was a tough year; we focused on a few targeted races".

Democrats did not spend money in either Culberson's or Sessions' districts in recent cycles, but presidential nominee Hillary Clinton's performance there in 2016 encouraged the party to take a second look.


Yeah, they're swarming into the primaries against Culberson and Sessions.  The money race is already being reported, and thank Jeebus James Cargas isn't winning that, either.

As for the statewide races?  I've seen this all before, and so have you.
Posted by PDiddie at Monday, July 10, 2017

To complete the 2006 parallel, Matt Dowd still has time to be the indy guv candidate, since he's not the indy senate candidate, right?

I've already heard Texas Greens say maybe we should wait out 2018 on the ballot access petitions.

With a weak crop of Dem gubernatorial candidates? Strike while the iron is not.

Dowd has until the end of this year, like everybody else; he's just got no interest in Austin. He's a creature of DC. Of course I could be wrong; if so, he could go the route of the Greens (and any other individual or party) and shoot for petition access, but the window is short -- something like 60 days after the March 2018 primaries.

With regard to the GPTX, they're really foundering at this time. I doubt whether they can get back on the ballot in 2018. And yes, there would appear to be a few races that will have Democratic vacancies next year, enabling them to get above 5% and qualify in 2020 ... if they were preparing now and poised to execute a plan next spring. That isn't happening, despite the good intentions of new state co-chair Wesson Gaige.

Even another ghost like Brandon Parmer would be enough.

Part of the local problem stems from the fact that the Harris County co-chair and his wife spend every summer back in New York, which leaves a void in leadership that no one else has filled.

Their national meeting starts in a couple of days so I'll scrounge around for some news about that as it breaks.

I'll have something up on 2018 Greens probably Thursday.