And maybe a Trump drop-in (see below).

DALLAS - On the day before Texas Republicans were poised to open their biennial convention where delegates will pick the hottest issues they believe their Red State government should address, longtime party member Bert Keller quickly ticked off his top five. He would empower conservative, Christian principles in government; abolish firearms licenses; secure the border; cut taxes; and limit access to public restrooms for transgender people.

"Talk is cheap. It's time for action," said the Dallas family-business owner and tea party activist who said he plans to vote his conscience as an alternate delegate at the statewide meeting. "This party represents the real grass roots, and that's what the grass roots want - action."

"Standing up for conservative values is one thing. Crazy issues are another," she said, arguing briefly with Keller on the gun-license and restroom issues. "I vote to get away from the people who have been sniffing paint."


God, I wish I had said that.  Looks like Ms. Porter picked the wrong weekend to try to kick the habit, though.

To some, the state's Grand Old Party appears a bit fractured in its focus, as the ultra-conservative tea party influence becomes the mainstream and as party leaders seek to retain their hold on Texas politics, even as shifting national trends suggest that some of the GOP's hard-line stances on immigration, same-sex marriage and voter ID may not be playing as well as they once did.

While Lt. Gov. Dan Patrick and Attorney General Ken Paxton have blasted transgender restroom mandates in recent days to the applause of many Republicans, others see little urgency in the issue.

While Gov. Greg Abbott is pushing a national campaign for a Convention of States to reframe the Constitution to give states more power over the federal government, tea party factions argue Abbott's plan would needlessly risk a disastrous liberal rewrite.

Even though it stands no chance of approval, the issue of whether Texas should secede from the United States, a plank that some activists want in the state party's platform, appears set to get a hearing before the full convention.

Even the race for party chairman has taken a nasty turn, with a mailer supporting Houston lawyer Jared Woodfill accusing current state chair Tom Mechler of Amarillo of "supporting a homosexual agenda."


"The Homo Agenda" is as old as Betty Bowers (who's been in assisted living for a decade now, but was once a dead ringer for state Sen. Lois Kolkhorst).  Charles has gotten his heavy bag work in already on the state chair race, so I'll throw some roundhouse kicks at a few other 'highlights' of the weekend coming up.

Robert Gelman, a onetime Cruz supporter, stood in a corner of the convention hotel Wednesday surrounded by Trump "Make America Great Again" campaign signs and agreed that getting a Republican elected president is the only thing that counts. Several delegates booed the signs as they passed Gellman.

"This has been a love-fest for Ted for the past four years, since he got elected to the U.S. Senate, and this year will be a welcome-home, job-well-done reception for the man who we respect as a true movement conservative," said Gelman, a Fort Worth businessman and self-identified tea party realist. "Ted led the fight to change government. Republicans are doing that. Donald Trump will do that. We must stop the Obama-crats. They are ruining the country."


It has failed to seep in over the past 3.5 years that Obama isn't running for president, isn't taking their guns, isn't a Kenyan Muslim socialist.  Horse's asses led to water and all that.  But hey, some of those in attendance may actually boo Trump -- let's keep our Twitter eyes peeled for whether that happens, if he should indeed show up -- so I suppose we should count that as progress.

Dan Patrick is prepared to general the War on Peeing and Pooping in Public, which will be 2016's rallying cry for Republicans from sea to shining sea.  Trumpeting 'freedom' while performing some kind of inspection on those who suffer the unfortunate consequence of having to urinate or defecate away from home isn't a battle to be left on the fields of North Carolina. 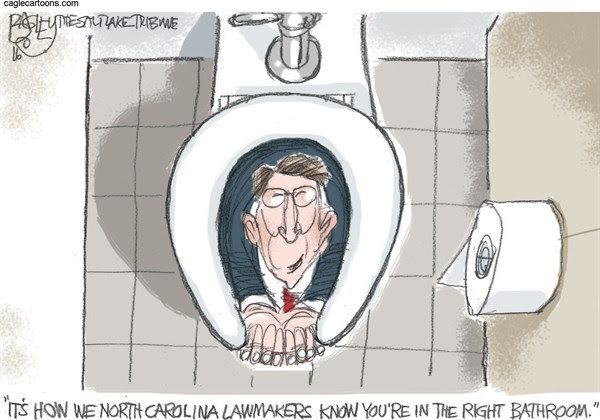 (I really wanted to save that one for Sunday.)

Ted Cruz still hasn't endorsed Drumpf; will that happen at his 'hero's welcome' today or tomorrow?  Will some intrepid reporter inquire of Governor Abbott (with regard to the West fertilizer plant explosion now being classified as a criminal act) whether his 2014 advice for citizens to "drive around" and ask about ammonium nitrate stored near their homes is still recommended?  Can Rick Perry and Judge Roy Moore light a fire under the Texas Eagle Forum's Christian soldiers that's hot enough to get Jared Woodfill elected chairman?  Will the secessionists' resolution carry the day?  And if so, can they please hurry up and GTFO of the USA before November, so that the state's electoral votes won't count in this year's presidential election?

(Also yesterday), the Platform Committee of the Texas Republican Party voted to put a Texas independence resolution up for a vote at this week's GOP convention, according to a press release from the pro-secession Texas Nationalist Movement. The resolution calls for allowing voters to decide whether the Lone Star State should become an independent nation.


For all you Berners saying you'll stay home on Election Day: this is what happens when you do.  You have a fresh chance coming up on the calendar to avoid being ruled by your inferiors.

Boy, that's a lot of bullshit that's going to have to be blogged.  Documenting the Texas conservative atrocities is a damned dirty job, but somebody has to do it.
Posted by PDiddie at Thursday, May 12, 2016