-- According to Harry Enten at FiveThirtyEight.com (who has only been wrong a time or two), Hillary Clinton will clinch the nomination on June 7 -- two weeks from today -- once the polls close in New Jersey, a couple of hours before the polls close in California.   So maybe that's what she meant when she said California's votes won't be counting.

(But Ted will still be an asshole long after that.  Those will be the last clicks he gets from here for a while; you won't be finding him in the Wrangle or in the blogroll to the right any longer.  He voluntarily deported from my Facebook friends list recently, which saved me four seconds' worth of my time and trouble purging him myself.  Bye Felicia, Ted.  Hope to see ya in San Antone next month so I can punch you in the nose.)

-- So we'll see what kind of good Democrats Sanders delegates plan to be in San Antonio at the TDP state convention three and a half weeks from now. The people organizing the delegation are stressing harmony and cooperation, which really isn't tasting like my brand of tea at the moment.

I have media and delegate credentials, but except for a sudden desire to straighten Ted and a few other people out, I'm disinclined to attend the convention at all.  Just won't be able to stomach all the Clinton slobbering and fawning. 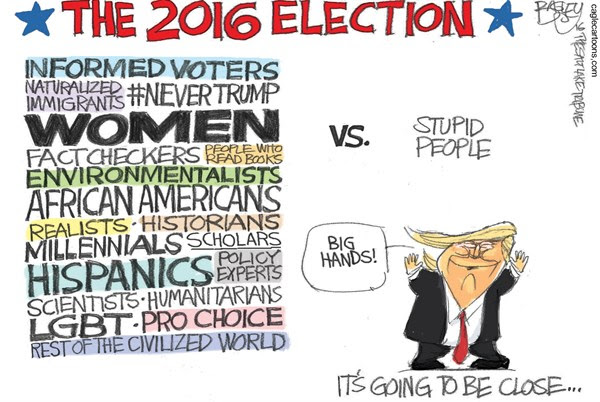 -- Let's emphasize: Hillary Clinton is in no danger -- not at the moment and probably not ever -- of failing to be elected president of the United States.  Disregard national horse race polls that show her neck-and-neck with Drumpf, and remind yourself that we do not elect presidents by popular vote.  That is and always has been nothing more than careless media spin.  Pay attention only to state polling in an Electoral College scenario.  Those polls continue to hold Clinton as a prohibitive favorite.  The WaPo's first take, for example, has several states as tossups that really aren't: Colorado, Michigan, Pennsylvania, and Nevada -- by Cillizza and Bump's own admission -- are not seriously swing states.  Add them (51) to Clinton's tally and she is just 18 votes from the White House.  That's Wisconsin, New Hampshire, and Iowa.  Or either one of Florida or Ohio.

This premise gives no weight to the formidable (relative to their history) challenge to Trump's electoral prospects by the Libertarian ticket of Gary Johnson and former MA Gov. William Weld, mentioned at the end of RNU Vol. 4.  Whereas the US Green Party is currently ballot-eligible in just 21 states, the Libs are on in 32.  That turns a couple of tossups blue all by itself, IMHO.

And if Arizona and Georgia are truly in play, then Drumpf has no chance at all.  Go ahead, play around with the map yourself.  It's not going to be Landslide Lyndon territory for the former Goldwater Girl, but it's not going to be very close, either.

With these thirteen states -- I contend it's less than ten -- being the only ones where anybody's votes might matter, that leaves a lot of Americans with the opportunity to vote their conscience.  Their votes for Trump or Johnson, in California or New York or every other solidly blue state above, won't elect Clinton president.  Likewise, a vote for Jill Stein in Texas will not -- cannot -- elect Trump.  But you'll continue to see this logical fallacy repeated by Hillbots from now until Election Day.  It's no more true than blaming Ralph Nader for Al Gore's loss in 2000.  Now, it's possible that a vote for Johnson-Weld in a swing state could be blamed for Clinton's victory in November, but only if you believe the false premise that Libertarian votes belong to the GOP ... just as Green votes are owned entirely by Dems (sic).  Ross Perot caught grief for Slick Willie and his two terms in 1992 and '96, but let's leave the GOP to fight amongst themselves over that.

Let's call the Clintons extremely lucky in politics, if nothing else.

An indictment of Hillary Clinton by a federal grand jury, presented with evidence that she criminally mishandled classified information could upset the apple cart, but I believe that's simply unlikely to happen (even if she is guilty of the crime, which she very likely is).  And certainly there's a slight chance that she could fuck up a sure thing in some other way.  But I can't see it happening.  Clinton may be a monster; absolutely capable of serious errors in judgment but she is not quite as self-destructive as Trump, and certainly not to the same magnitude.

From the standpoint of a handful of social issues -- women's reproductive freedoms, extending civil rights to all of the LGBTQ community, perhaps some ground regained in voting rights, and some for the obstructionists lost in voter suppression and disenfranchisement -- a Clinton 2.0 administration is a good, good thing.  From the view of incremental advancement in other areas (the federal minimum wage, maybe some of that old Clinton magic dust sprinkled around the economy), Hillary's definition of 'progressive', like Nevada being a swing state, is a charade.

And as for more wars, drone assassinations, the continuing Svengali-like control of corporate lobbyists over her and Congress, and the resulting legislation that further enriches the banks, pharmaceutical companies, and Big Oil and Gas to the detriment of our environment and our health, financial and otherwise ... we might be in worse shape than if we somehow got Trump.  Il Douche, the neofascist, would make no pretense of exceeding capitalism's worst and greediest dreams; Clinton would say she'd do something about it and then not.  Yes, prevarication coupled with the pillaging is worse.

So a lot of Americans, perhaps many more than ever in history, will see no difference between the Demoblican and the Republicrat and won't vote as a result.  That has the odd consequence of making the votes of those who do worth more ... just as our historically low turnout elections for runoffs in Texas and municipal elections in Houston do the same.  Enabling the most fanatical about politics, however, aggravates the system's and its players' worst instincts.

Your vote has more influence in a low-turnout scenario, but simultaneously produces lousier representation and a shittier democracy.  The smallest number of people carrying the greatest weight -- as with the 5-4 Supreme Court decision that handed the presidency to George W. Bush in 2000 -- often produces Murphy's Law-like consequences ... such as 9/11, My Pet Goat, pre-emptive wars based upon lies about weapons of mass destruction in Iraq, American soldiers and the CIA performing torture on innocent Iraqi citizens, Congressional reports about the torture being destroyed accidentally, all while the drones and bombings and special forces' boots on the ground in country proliferate, inflaming Muslim extremists in a dozen nations around the world ... which inevitably results in more wars.

Round and round we go, until there's nothing left.

So vote or don't, Berners.  You may not perceive that it makes any difference in your lives either way, and from a certain point of view you're not mistaken.  As for me, I'll vote my principles.  That lets me sleep well at night.
Posted by PDiddie at Tuesday, May 24, 2016

Besides, if Hillz really DID need my help against Drumpf, my help wouldn't be nearly enough, you know what I mean?

Oh, and thanks for the shout-out ... maybe I need to post that link on Ted's blog. Be right back!

She was sixteen and her parents were Republicans (Goldwater Girl). I wonder how many like her did not follow in their parents foot steps when they were young? When she turned voting age who was she supporting?