What's wrong with everything

Elizabeth Warren versus Jaime Dimon, from 2013.

A meeting between Sen. Elizabeth Warren (D-Mass.) and Jamie Dimon deteriorated almost immediately after the JPMorgan Chase & Co. CEO visited the recently elected senator and consumer advocate at her Capitol Hill office in 2013.

In a new afterword for the release of the paperback version of her book A Fighting Chance, Warren recalls that the tenor of the conversation between the two policy adversaries soured when Dimon complained about financial regulations that she has supported:

When the conversation turned to financial regulation and Dimon began complaining about all the burdensome rules his bank had to follow, I finally interrupted. I was polite, but definite. No, I didn’t think the biggest banks were overregulated. In fact, I couldn’t believe he was complaining about regulatory constraints less than a year after his bank had lost billions in the infamous London Whale high-risk trading episode. I said I thought the banks were still taking on too much risk and that they seemed to believe the taxpayers would bail them out -- again -- if something went wrong.

Our exchange heated up quickly. By the time we got to the Consumer Financial Protection Bureau, we weren’t quite shouting, but we were definitely raising our voices. At this point -- early in 2013 -- Rich Cordray was still serving as director of the consumer agency under a recess appointment; he hadn’t yet been confirmed by the Senate, which meant that the agency was vulnerable to legal challenges over its work. Dimon told me what he thought it would take to get Congress to confirm a director, terms that included gutting the agency’s power to regulate banks like his. By this point I was furious. Dodd-Frank had created default provisions that would automatically go into effect if there was no confirmed director, and his bank was almost certainly not in compliance with the those rules. I told him that if that happened, “I think you guys are breaking the law.”

Suddenly Dimon got quiet. He leaned back and slowly smiled. “So hit me with a fine. We can afford it.”

As Warren noted in a 2014 Senate Banking Committee hearing, Dimon was proved correct: Though his bank was forced to pay $20 billion in fines, he still received a significant raise at the end of 2013.

Now, banks like JPMorgan are directing their anger toward Warren, threatening to withhold campaign donations to her fellow Senate Democrats in protest of her advocacy for Wall Street accountability and greater oversight and regulation of financial services institutions. 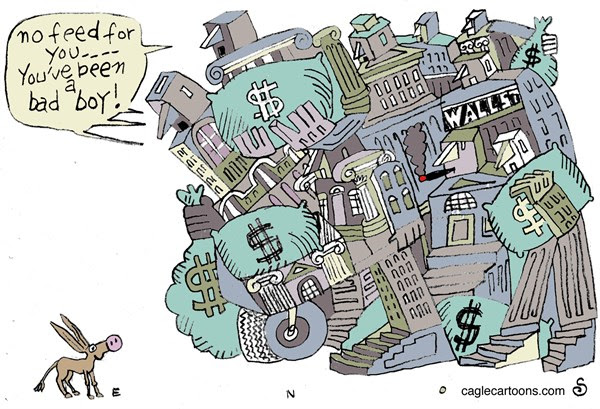 I would expect that Chuck Schumer, the next Senate minority majority leader, is going to have to rein Warren in or knuckle under to Dimon -- or both -- sooner than later.  In a different world (hell, even in a different country) things could, and did, go... differently.

Prosecute bankers?!  ShockedIsay.  Would politicians actually go after lobbyists who bribe them?  And not with fines but with handcuffs?  Not even with slaps on the wrist in the Texas Legislature, as we already know, but -- God forbid -- in Congress?

The banks' confidence in their ability to get away with something that smells like bribery is such that they appear to have telegraphed their quid pro quo offer to a major wire service. But even that understates how broken our system has become. Washington pundits are preoccupied with the question of whether the banks' threat to withhold contributions will impact the pending presidential campaign of Hillary Clinton. No one seems to wonder whether it's a problem if the banks, as they appear to, have bought the system.

Our system has become so broken that those participating in it can ignore corruption when it is staring them right in the face. Or worse, they are just waiting to profit from it themselves.

Get. The Money. Out. Of The System.

At Easter season, during Holy Week, as Passover seders are scheduled... even an atheist knows that Jesus said, "Love one another..." and still beat bankers with a whip.

Let's not forget that Dear Leader also loves Jamie Dimon and other banksters more than homeowners: