Greg Abbott's letter directing the Texas State Guard to monitor U.S. Army soldiers taking part in training exercises in Bastrop and other parts of the state drew widespread surprise and criticism from Austin to Washington on Wednesday as pundits and officials questioned what the governor was thinking.

While Abbott's aides played down the move as a normal step to tamp down some Bastrop residents' concerns that the military exercises presaged an invasion and a disarming of the populace by the federal government, some state lawmakers and even the White House were asking what Abbott was worried about.

"I have no idea what he's thinking," White House Press Secretary Josh Earnest said in response to a reporter's question about Abbott's letter to the Texas Guard the day before.


I won't be able to say this very often, but I know what Abbott is thinking: throw the foamy-mouthed right wing freaks some red meat, or else Dan Patrick will, and that might eventually lead to a defeat in a Republican primary for Texas governor.  Glenn Smith had a better response.

"Abbott's pandering to paranoid, secessionist fools would be comical if it wasn't so costly and frightening," said Glenn Smith, director of Austin-based Progress Texas PAC, a Democratic Party group.

"Abbott has the state military confronting the U.S. military because some nut cases fear, what, armed U.S. takeover of Texas? Seriously? What next? Will Abbott call out the troops to protect us from alien abduction, abominable snowmen and Bigfoot, or should I say an invasion of Bigfeet? What will this bit of extremist theater cost Texas taxpayers? Abbott should tell us. Now."


You don't have to be a veterinarian to know what happens when you let rabies go unchecked.

Within hours after Abbott's directive was made public on Tuesday, online applause and protests heated up anew. Self-styled "patriot" group members suggested they may monitor the exercises on their own.

Abbott aides said the swirling issues and concerns were one reason he asked the Texas Guard to monitor the exercises, not any concern that any of the conspiracy theories may be valid. 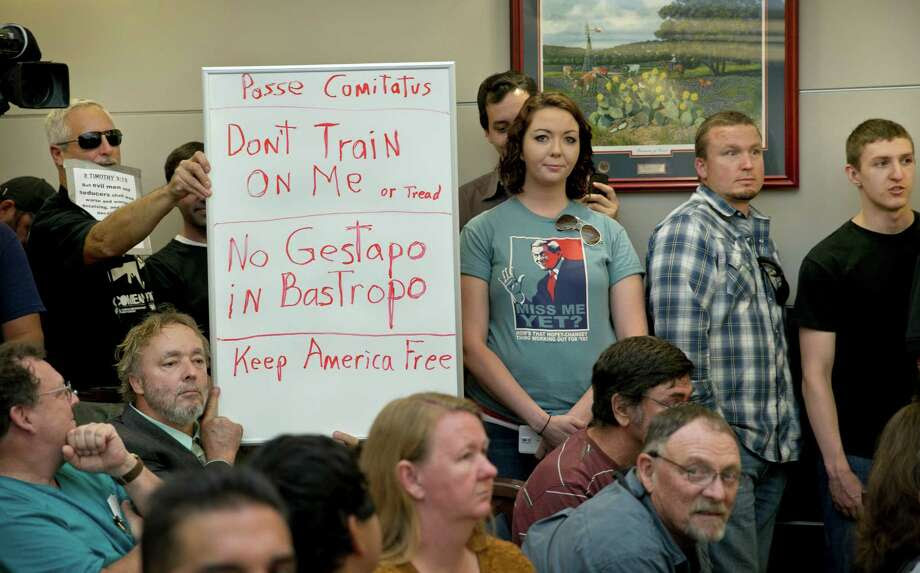 Bo Collier, 61, a retired environmental engineer who was among the protesters at the Bastrop meeting, said Abbott was spot on with his order.

"(Abbott) knows we can't trust anything Washington says," Collier said. "Think about this, sir: The federal government has militarized our police. They want to do away with the Second Amendment. I believe this is a step to gain intelligence for martial law at some point in the future. You may call me crazy, but just wait, the signs are there."


The signs do indeed say you're nuts, Bo.  Governor Abbott thanks you for standing (somewhere) near him at this time of "crisis".

Update: Story done gone national.  And there is one lonely Republican voice of reason (again).

He said he wrote because the thought that the U.S. military would be a threat to Texas is "embarrassing" and it is important "to rational governance that thinking Republicans call you out on it."

"Is there ANYBODY who is going to stand up to this radical nonsense that is a cancer on our State and our Party?" Smith asked.