One hundred fifty, one hundred, and fifty years ago today

-- Sesquicentennial: The War between the States ended.

Lee and Grant, both holding the highest rank in their respective armies, had known each other slightly during the Mexican War and exchanged awkward personal inquiries. Characteristically, Grant arrived in his muddy field uniform while Lee had turned out in full dress attire, complete with sash and sword. Lee asked for the terms, and Grant hurriedly wrote them out. All officers and men were to be pardoned, and they would be sent home with their private property – most important, the horses, which could be used for a late spring planting. Officers would keep their side arms, and Lee’s starving men would be given Union rations.

Shushing a band that had begun to play in celebration, General Grant told his officers, “The war is over. The Rebels are our countrymen again.” Although scattered resistance continued for several weeks, for all practical purposes the Civil War had come to an end.


Yes, about that 'scattered resistance'.  It continues to this day.

(T)he Sons of Confederate Veterans are now nearing completion on a monument to their ancestors just off I-10, just this side of the Sabine and the Louisiana border.

Situated at the corner of I-10 and Martin Luther King Jr. Drive, “The Confederate Memorial of the Wind” will feature a walkway lined by the Confederate battle flag and those of several dozen (the count varies in every article) Texas regiments leading up to a circular monument composed of 13 columns honoring each of the Confederate states.

Around the time the project got underway two years ago, Granvel Block, an Orange resident and the SCV’s Texas statewide commander, rejected the idea, often espoused by the NAACP, that Confederate symbols are hateful relics of white supremacy and slavery.

Block said the group wants to preserve history. He said some people, white and black, do not like the Confederate battle flag design because they don’t understand the history. “So many things (about the Confederacy) have been taught wrong or with a poor skew,” he said. As examples, he said the Civil War was not fought over slavery and that slaves were owned in the north, not exclusively in the south. He said individual state governments were sovereign and that “our states were invaded by northern troops.”


Right.  Not about slavery.  Despite what the secession statements of Mississippi, Georgia, South Carolina, and Texas actually say.  Despite what the vice-president of the Confederacy, Alexander Hamilton Stephens, said.  Tip of the hat, Grant-to-Lee-style, to Infidel for the links, and for this.

That was the Confederate cause: slavery and explicit racism drenched in self- righteous Bible-thumping.  It's no wonder certain elements today feel nostalgic for it.


Related: Gadfly, on why we need an Appomattox (or a "You lost, traitors") Day.

-- Centenary (plus two days): The birth of Billie Holiday.

She wore white gardenias in her black hair and sang about the scent of magnolia, sweet and fresh.

Billie Holiday, born 100 years ago Tuesday, is being remembered as a timeless American jazz singer who risked her career to record a song with a civil-rights message that resonates still today.

In 1938, Holiday became the first Black woman to work with a White orchestra. One year later, her label, Columbia Records, would refuse her request to record "Strange Fruit," a song about the lynching of a black man.

Time Magazine called Holiday's haunting ballad the song of the century. It has sold millions of copies.


-- Golden anniversary: The opening of the Astrodome. 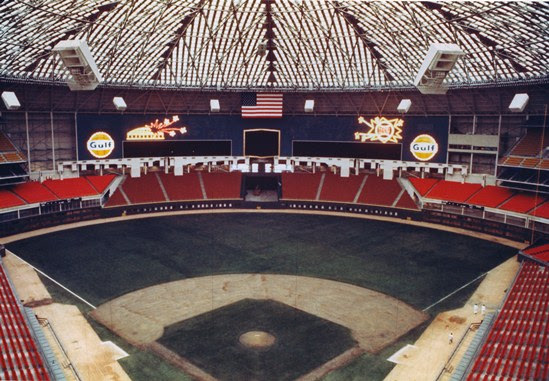 They're throwing a party for her tonight, and I'll be there.
Posted by PDiddie at Thursday, April 09, 2015