A furiously busy week to be a political pundit

And not only if you're trying to keep up with all the bilge being spewed at Wendy Davis by Republicans.  But since nobody in Texas wants to hear anything about Chris Christie and his Texas prison deal, or Bob McDonnell, or Mike Huckabee, or even Dinesh D'Souza, then let's go with the (septic tank's) flow.

Peggy Fikac swallows the same GOP hook, line, and sinker that Wayne Slater bit on, and now she's flailing around in the bottom of the bucket with him.

Davis, D-Fort Worth, quickly released a statement condemning as "abhorrent" the language in the video distributed by controversial conservative activist James O'Keefe, known for selective editing of videos critics call deceptive. The footage appeared to include a meeting of volunteers for Battleground Texas, a group closely tied to the Davis campaign.

It was another day of Davis responding to criticism in a week that started with intense scrutiny of her background, which she has described in shorthand fashion as a journey from a 19-year-old single mother in a trailer park to graduation from Harvard law school.


You would also have expected the Texas Tribune to take this bait.  And the pushback is under way.  It's a pity that anybody is willing to believe anything on a video submitted by James O'Keefe at this point,  but hey, the corporate media hates being called 'librul' just as much as conservatives enjoy calling them that, so whaddya gonna do?

I'll say it again: this right-wing bullshit avalanche is not doing much of anything to sway independents to vote Republican.  It is meant to plant seeds of doubt in the mushy minds of low-information voters.  It may succeed in that endeavor.  What we once assumed about vile personal attacks depressing voter turnout turns out not to be the case.  But if Republicans can fling everything they can think of at the wall, and have some of it stick, thus keeping Texas voter turnout at abysmally low levels... they can prevail.  As they have in Texas for a generation.

This once again demonstrates the steep hill Battleground Texas must climb.  And while there are some Republicans who understand where this is leading their party, they're deep in the closeted minority.

As far as Wendy Davis supporters saying mean things about Greg Abbott being confined to a wheelchair goes, I've got all you could ever want.  I'm just disappointed that little douchenozzle O'Keefe can't find the stones to link to me.  But then doctored video seems to be his fairly exclusive thing.  Poor dumb Greg has tried to draw attention to those posts, but nobody pays him any mind.  (Greg: try #tcot. I understand that helps sometimes.) 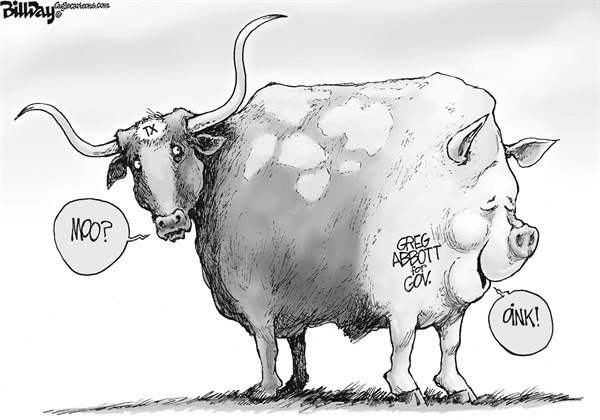 And I'm going to keep plugging away at the despicable sociopath and modern-day fascist that is Wheelchair Ken (or Coathanger Ken, if you prefer) just as long as RWNJs keep saying things like "AB", "golddigger", and "liar".  And I doubt that the legacy media is ever going to write a story about all the nasty shit the right-wing freaks have already said and written about Wendy Davis, and I doubt that Davis will have to disavow my support, since I'm kind of a Greenie anyway.  And if there are any Democrats who think it's mean to say that Greg Abbott's conscience and empathy are as withered and useless as his two legs, then they don't remember the lessons Lloyd Bentsen taught them.

If there are any cringing liberals who don't want to play politics the way conservatives play it, then they can go play Candy Crush.  I'll punch back for them.

Update: Nobody does it like Wonkette does it.  And Socratic Gadfly has more on the week in Texas politics that was.
Posted by PDiddie at Friday, January 24, 2014

Twould be fun to get on that ratfucker O'Keefe's radar, wouldn't it?