The Texas Progressive Alliance pauses to recognize the life of Martin Luther King Jr. today as it brings you this week's roundup. 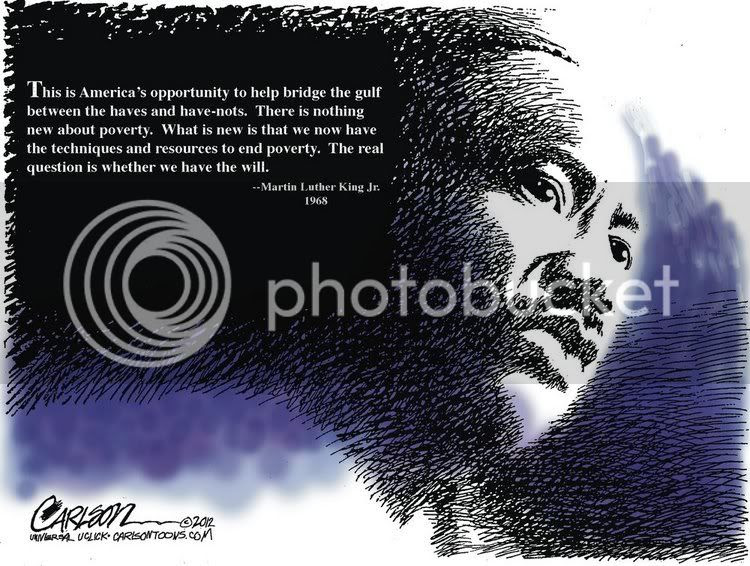 Eye On Williamson observes that keeping immigrants in the shadows, because it's not good politics for the GOP in an election year, shows exactly what the GOP's priorities are: John Carter and the GOP's Misplaced Priorities.

Horwitz at Texpatriate reports on the controversy that has recently erupted in the US Senate Democratic primary between David Alameel and Maxey Scherr.

The civil war in the Harris County Republican Party threatens to disrupt the candidacy of Dan Patrick for lieutenant governor, and PDiddie at Brains and Eggs has a snapshot of the battlefield.

CouldBeTrue of South Texas Chisme wants you to know that those charter schools are using your money to push the propaganda to your children..

After reading a story about how China is paying for new shipping ports for Sri Lanka, Neil at All People Have Value wrote that when somebody else builds your port, you lose control of what ships arrive and what goods are received. It is better that we construct our own ports of friendship and imagination. All People Have Value is part of NeilAquino.com.

Texas Leftist welcomes its first ever guest contributor... a remarkable man who has truly lived all sides of the marriage debate. In the span of a few short years, this father of three went from being married to his wife to marrying his husband. Fred-Allen Self has an interesting story to tell.

Better Texas Blog celebrates the 50th anniversary of LBJ's War on Poverty and reminds us that there is still much to be done about it.

Scott Braddock reports on a targeted worker misclassification crackdown going on in Texas.

The Texas Green Report wonders if the earthquakes in Azle will lead to a change in thinking, and in regulation, on fracking.

The Republic of Austin shares an Austin-based ad campaign that is trying to convince people not to move to Austin.

The Heights Life has some good news about one school that's bucking the trend on library downsizing.

Texas Vox wants you to write a letter about Keystone XL.

Finally, the TPA warmly congratulates Eileen Smith of In The Pink Texas for the beautiful new addition to her family.
Posted by PDiddie at Monday, January 20, 2014