Two and a half candidates for mayor

I'll be having lunch today with the incumbent. The Chronic covered the challenger's announcement earlier this week (but put the story behind the paywall)...

Former Houston City Attorney Ben Hall formally launched his mayoral campaign against incumbent Annise Parker Wednesday night, decrying the burden of taxes and fees he said are driving city residents to the suburbs, and saying Houston's mayor must have a grander vision.


Mike Morris has a pretty good summary of the state of play today.

Parker said Hall seemed to be describing "an alternative universe." Parker said she has led the city through a deep recession without raising taxes, and said the major fee imposed under her watch was a voter-approved drainage fee. As for international efforts, Parker said, the city recently has added direct flights to Turkey and China.

"I don't think I've ever heard any political candidate, but most especially a candidate for mayor, imply that it wasn't important to have a balanced budget," Parker said. "He clearly sees a different city than I see. The city of Houston is one of the best cities in America to live and work and raise a family. It is a magnet for the best and brightest from all over the world, and it continues to get better as we pull out of the recession. I see a city of growth and optimism."

Hall, who holds a law degree from Harvard University and master of divinity and doctoral degrees from Duke University, entered the 2009 mayor's race, but withdrew and supported Gene Locke, who lost to Parker in a runoff. Hall also considered running in 2011, when Parker narrowly missed a runoff against a group of unknowns, leading some to speculate she would be likely to draw a challenger this year.


Hall might have been a stronger candidate than Locke in '09, and could very well have prevailed in '11 when Mayor Parker was most vulnerable. Parker is riding the wave of the Houston economic tsunami, however, and has improved her standing in just about every measure. I agree with Bethel Nathan....

Hall has no moment of historic import going for him, Nathan explains.

“There’s nothing emotional that’s driving me to turn out in mass numbers for Ben Hall,” Nathan said. “The only thing Ben Hall does is take African-American votes from Annise Parker and make it possible for a white conservative” to win.

"There's not a case to be made that she's an awful mayor and that if she was around for two more years it would be detrimental to Houston's future. The Houston economy has done well, there have been no major scandals and, for the most part, Houstonians like Annise Parker."


The last line of that Chron article mentions the 'half' candidate.

One other candidate has filed a campaign treasurer form indicating he may run: Green Party candidate Don Cook, who ran unsuccessfully for City Council in 2009 and 2011.


I'll append this post later with any developments from our luncheon today.

The bigger, tactical mistake is Hall attempting to recreate the “Pincer Strategy” that didn’t work terribly well for it’s (sic) original practitioner, Gene Locke. There’s a big difference between winning broad Anglo GOP support and having a GOP consultant along with a fringe Republican Kubosh brother by your side at one of the way-too-many announcements of your candidacy.

Update: Since I have been a laggard at attending these, it was great to see so many new (to me) faces; Wayne from Texas Leftist and Stephanie TexansChick among others. And Ben Mendez, Rogene Calvert, Jenifer Rene Pool, and Lissa Squiers were just a few of the aspiring politicos. Here's some pics. 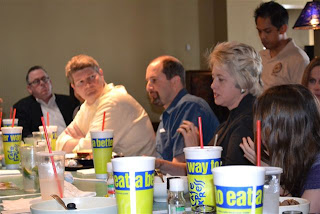 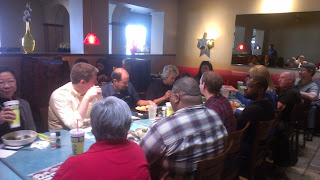