Stock market soars, but nobody's talking about it

It's been kind of an unintentional theme here for awhile, even in the Funnies: the old "rich get richer, poor get poorer" story. What's different this time is that neither political party wants to talk about it, much less take credit for it. Joe Concha at Mediaite nails it.

... Obama portrays himself as a savior of the middle class. His primary function, as successfully articulated in the campaign that earned him a second term, is to shelter working folks from Republicans, who, of course, only exist to protect their rich buddies currently waterskiing behind a yacht near you.

Mantra: Tax the top 1% even more, make them pay their fair share, level the playing field, and give everyone else a break.

Most Republicans portray themselves as saviors of the economy and capitalism. Their primary function is to prevent the President/Democrats from spending us into oblivion (some call it Greece) as evidenced by our $17 trillion debt…about $7 trillion of which was spent under the current administration.

Mantra: Stop the bleeding, balance the budget, allow more folks to keep their hard-earned money, and party like its 1986 again.

In a related story, Friday’s Dow closed down slightly at a still-eye-popping 14,514, ending its longest winning streak in nearly 17 years. This kind of rally, these record-highs, are usually great news for the party in power. But for a guy who enjoys spiking the football on any issue resembling success, Mr. Obama rarely broaches the subject.

Republicans are mum as well. After all, any good economic news (in their view) can’t be good for the party going into the midterm election season (which starts in seven minutes). That’s not saying [...] that the GOP is rooting for Americans to suffer…it just means you won’t really hear any conservatives in government or its brand of media bring it up.


This past Friday, every single Republican (and six Democrats) in the House voted against raising the minimum wage. That vote doesn't seem to reflect the will of the 71% of Americans -- which includes half of all Republicans, mind you -- who support raising the federal minimum.

I know this is going to come as a shock, but your Congresscritter -- unless you live in a deep blue district -- is out of touch with you, his constituent. If lifting the minimum wage can't be done in an economy where the rich people are this rich, it probably can't be done with this Congress. But it also may not be -- even here, in Houston's latest boom -- the minimum wage that is all of the sputtering economic problem. 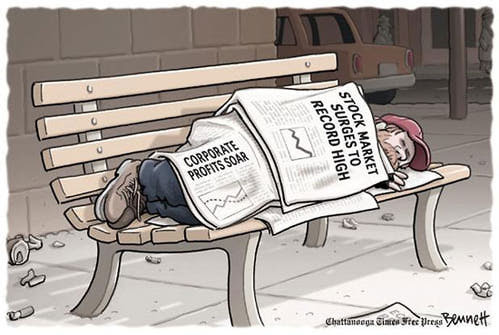 Let's not digress, though.

So why isn’t the President taking credit for the market’s awesome performance?

Here’s one theory: As mentioned earlier, the President says he’s a champion for Main Street, not Wall Street. If he touts the Dow busting through another ceiling, he’ll only be contradicting the Occupy Wall Street crowd he subtlety aligned with during the campaign (when he was drawing a contrast with a very rich Republican nominee). The way Mr. Obama’s surrogates in the media laid out the argument when courting votes, Wall Street is a place where corporate raiders like Gordon Gekko and Mitt Romney get rich on the backs of the middle class. To suddenly say a big bull market is a good thing for the country as a whole would somehow be seen as hypocritical, the improving 401k argument notwithstanding.


Concha has some other ideas, and includes an explanation of quantitative easing that everyone ought to read.

Corporations doing better doesn’t necessarily mean its employees are also (consumer incomes are at a 20-year low, for example). Hence why President Obama didn’t mention the market’s performance even once during his most recent interview with George Stephanopoulos last week, a conversation dominated by the economy. Creating more millionaires is soooo Republican in the President’s eyes, but that’s exactly what’s going on, and that’s exactly why he ain’t talking.

And when the President wants to avoid a subject, so do (for the most part) his allies in the media. A booming stock market, particularly one breaking records that had existed for nearly two decades, should be a lead story on, say, MSNBC. But all we hear about is how horrible Paul Ryan’s budget is, or all about the legion of doom at CPAC, then we ever do about what’s unfolding on Wall Street.


I know it's a barrel of laughs to make fun of Sarah Palin -- and whatever revolting thing has most recently fallen out of the mouth of Ted Cruz, or Louie Gohmert or even some shithole who doesn't represent Texas -- but I am just worn out on that. Somebody needs to talk about what's really happening, after all.

As for conservative media, it’s the same deal. For Sean Hannity or The Five to lead their programs talking about a historic rally would appear too favorable to the President’s economic record amidst the gloom and doom normally hammered home on a daily basis.


At least we haven't heard as much bleating about Obama being a socialist of late, have we?

In other news, Rick Perry is digging his little heels in on Medicaid expansion. If he had even 10% as much empathy as Rob Portman, we would still be left hoping that Griffin Perry would come out of the closet as poverty-stricken.

But that seems as possible as the governor himself finally declaring he is gay.
Posted by PDiddie at Sunday, March 17, 2013

Agree with everything but Rob Portman's empathy.

He knew about his son's gayness before his last election and only saw the light later.

When a GOP goober goes pro gay rights before retiring from elective office, then it will be big news, not two fingers in the wind instead of one.

No, I'm with you; Portman knew his son was gay two years ago but kept himself in the closet to preserve viability as a possible v-p pick. He doesn't get and doesn't deserve any kudos.