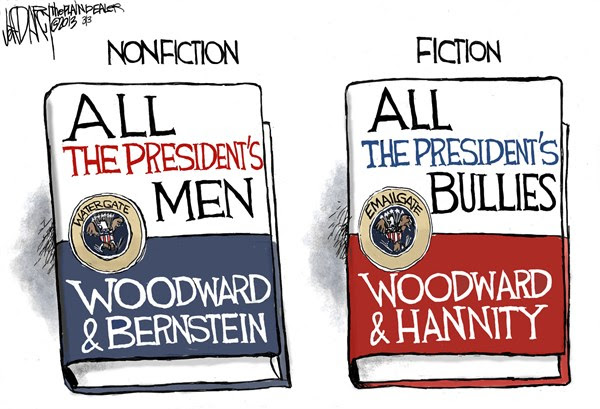 Interesting racist cartoon there at the end. You would scream bloody murder if that same cartoon was regarding Democrats and depicted "Rufus" or "LaQuisha" in such an stereotypical way.

Before going after the racist mote in the eye of conservatives, please remove the racist plank from your own.

The fourth cartoon (hint for conservatives: count either way, from the top or from the bottom) hit a little too close to home for you, didn't it?

My bias is against ignorance. You need to look at the first cartoon again -- it's the one at the top of the post -- for the actual racism.

You're not ignorant, so stop pretending you are.

Your right. I'm not ignorant. That's why I don't vote for Democrats -- the folks responsible for the actual Jim Crow laws.

"Your right. I'm not ignorant."

That is just too perfect. And you are a teacher, yes?

Yes, I am a teacher -- and my point was I'm not feigning ignorance (and you are surely not so ignorant as to have gotten that point). I reject the Democrats because they always have been currently are, and always will be the party of racism and racial division.