A troll on the Supreme Court

Probably more than one, but let's just deal with the worst one for the moment. 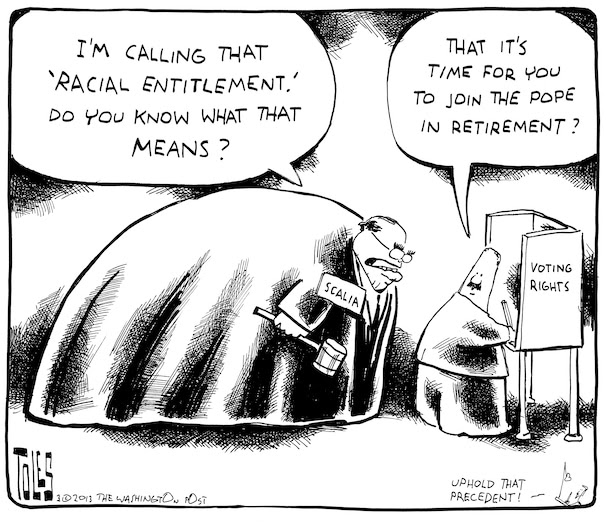 Maddow said that Scalia apparently thinks voting is now a “racial entitlement,” but he only says things like this because he’s a “troll” and loves to hear his comments elicit gasps.


Yes, that's exactly it. It's as if Glenn Beck is on the bench. Because that's where Scalia gets his talking points. 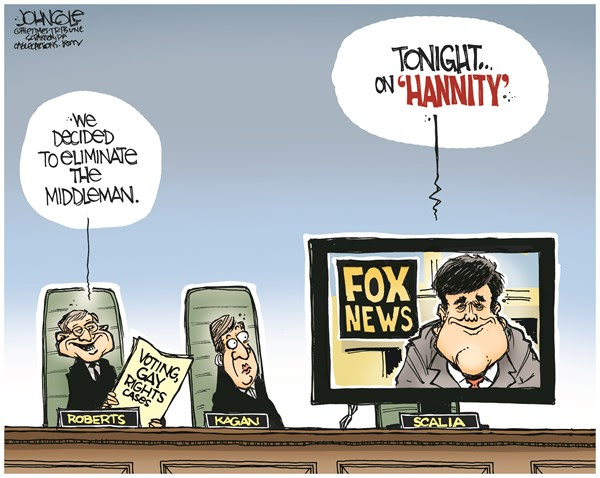 But feeding the troll is a bad idea also. Giving this pig-eyed sack of shit the publicity he seeks only serves to make his trollishness worse. Supreme Court Justices are, however, more difficult to ignore than Sean Hannity.

This is also not the right approach. A single SCOTUS justice has been impeached in the history of the Republic: Samuel Chase, who was acquitted by large margins on all counts. And the charges against him had to do with "intemperate, inflammatory" remarks and not misconduct, the standard by which legal action against judges was established by this precedent. Read that link and you will see many similarities, and not just to Scalia.

No, like Ann Coulter and Tucker Carlson and Ted Cruz, I'm just going to place Antonin Scalia on 'ignore' and recognize that what he is saying and doing should serve as motivation to those who do not want to have a Republican president nominate a Supreme Court justice for a long, long, time.

And to make that happen, the best investment of one's time and energy is to encourage as many minority voter registrations as they possibly can. On a daily basis, everywhere one is and everywhere one goes. As far as I am concerned, it is the one thing everyone can do that will make the biggest difference in the fastest amount of time.
Posted by PDiddie at Friday, March 01, 2013

Thomas and Scalia have basically made themselves irrelevant on the Court. As we saw with the high profile health care case, even the other members of the "strict constructionist" cult on the Court can't stick by these two.

And actually, Thomas is worse than Scalia, and has ethics problems to boot! But Thomas keeps quiet most of the time, whereas Scalia tries to compensate for not being able to have an AM talk show...