There are 41 names included in the document requests sent to Donald Trump Jr.’s lawyer, Alan Futerfas, and Paul Manafort’s lawyer, Reginald Brown, by the Senate Judiciary Committee. The requests include communications involving many individuals known to be ensnared in the Russia investigation, from President Donald Trump's former campaign manager, Corey Lewandowski, to Russian President Vladimir Putin.

But while this roster of characters would have made for a fine John Le Carré novel, one name included therein immediately attracted online speculation: that of former Green Party presidential candidate Dr. Jill Stein.


This is the article that sealed it for me.  I'll never be a Democratic party member ever again, and I'll find myself hard-pressed to vote for Democrats (even temperate judicial candidates who wave the pom poms and cheer on their teammates) in the future.  But because the only other alternative is more messed up than this, there will be an enormous number of undervotes on my ballot in elections to come.  That's sure going to suck, isn't it?  When you stop 'voting to block', so to speak, you're not left with many people to vote for.

There's been a long piece outlining the dysfunction of the Green Party in draft status for almost a month, but David Collins did a better job, and Gadfly had his take, not all of which I agree with -- he doesn't care for Stein and David Cobb too much, and I do, for openers -- but it's good enough to fill in some of the blanks from an outsider perspective (Collins is the insider, I am the former insider).  The topic of intra-Green squabbling is, however, clearly not of interest to most people; I had difficulty making the effort to put thoughts on the screen, and not because I didn't have any.  And not because they weren't strong thoughts, either.

It's worth repeating my premise that Texas has the worst Republicans in the country because it also has the lamest, weakest, worst Democrats.  (Greg Abbott campaigns against Nancy Pelosi and California because of this.)  By extension, Texas Democrats have their own little dog to kick, and it's Texas Greens.  This analogy extends, generally, to the nation at large.  When Democrats are feeling particularly bad about themselves, or need to feel better by being petty, mean, and vindictive toward others ... the Greens, from Ralph Nader to Jill Stein, are always there for them.

What, exactly, Stein has to do with Trump Jr.’s meeting last summer with Russian lawyer Natalia Veselnitskaya is unclear, as the Senate Judiciary Committee provided no context for its demands, which are to be honored by August 2. A request for an explanation to Stein’s former campaign manager remains unanswered at this time. And though she is active on Twitter, Stein has made no acknowledgement on that social media network of her name’s appearance in the Trump Jr. inquest.

None of this, of course, prevented some on Twitter from rejoicing at the prospect, however unfounded, that Stein was herself the subject of investigation. The glee is premature but understandable. (sic) Stein’s self-righteousness (sic) exasperated many supporters of Hillary Clinton, as did her portrayal of Clinton as effectively no better a choice for true liberals than Donald Trump. Some have blamed Stein for “spoiling” the election (sic), doing for Clinton what her fellow progressive Ralph Nader had done 17 years before for Al Gore. Her demand for a recount—a demand for which she reaped $7 million in donations—struck some as a pointless publicity ploy.


Author's insertions of 'I know better than this' should suffice for those who've read this blog in the past, and maybe later I'll go dig out the links to myself that re-explain it to those that need it.  Let's take the 'pointless political ploy' part and debunk that.  I can assure you that the vast majority of the money Stein raised for the recount -- over $2 million in 24 hours, almost $7 million in a week -- came from the very same Clinton-voting Democrats who hold her in such aggressive contempt (and did so before, for that matter).  I read their posts declaring they donated on various social media fora, and I looked at the financial reports.  News coverage at the time was demonstrative of the fact that the effort was no "ploy".  As a contributor at Bradblog, I saw and read the daily posts there as the recount effort was hindered, blocked, and finally halted ... by mostly Democratic election officials and judges in Michigan, Pennsylvania, and Wisconsin.

That’s all to say that, as the curiosity about her involvement with the Russia investigation plainly demonstrates, there remains remarkable ill will toward Stein and her role in the 2016 presidential campaign.

The questions about Stein’s ties to Russia are not new. They stem from a single photograph of Stein’s trip to Moscow in 2015. The image shows her dining at a table with Putin and Michael Flynn, the disgraced Trump adviser at the heart of the Russia probe.

Stein had never made any attempts to hide her trip to Russia or its purported intentions. “After this meeting I am more sure than ever that the ideas I'm bringing into the presidential race will allow the US and Russia to work together to address problems that would otherwise be intractable,” Stein said of the meeting on her campaign website.

More recently, she has defended herself against accusations that she was somehow involved in a joint effort with the Trump campaign and its Russian comrades to smear Clinton. When, last month, CNN’s Michael Smerconish asked Stein why she’d attended the dinner with Putin, she responded by deflecting blame. (sic)

“That picture didn’t start to circulate until long after the election,” Stein said, adding a little later: “It’s funny, Michael, you have to ask why is that picture kicking up a storm right now? I think it’s very related to the fact that the Democrats are looking for someone to blame.”


It is laugh-out-loud hilarious for a Democrat to accuse someone else (anybody else in the whole wide world) of 'deflecting blame'. 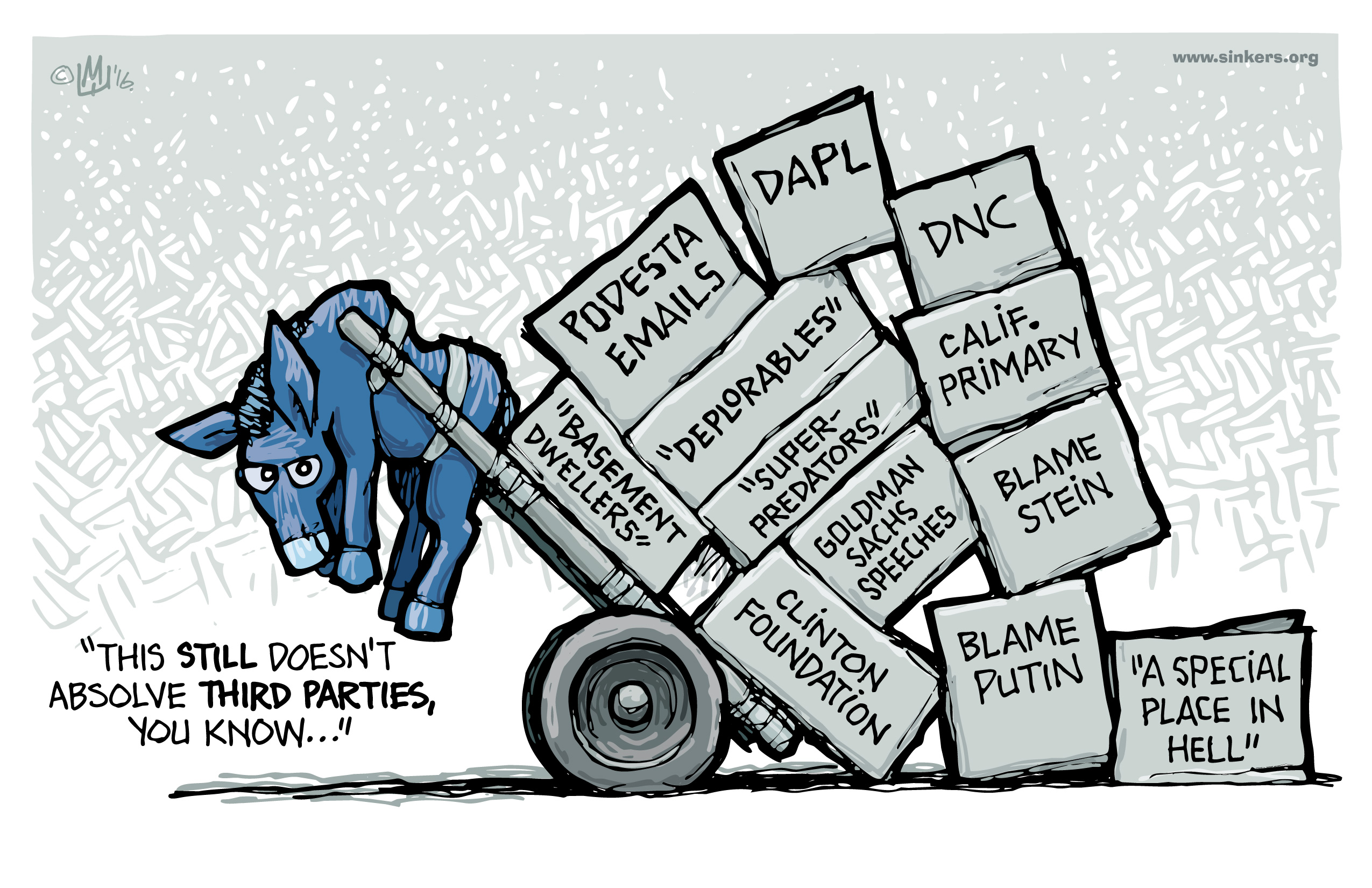 The political cartoonists get it, have always gotten it. It’s unclear if members of the Senate Judiciary Committee know something of a previously undisclosed Stein "backchannel" to the Trump campaign or are simply reaching out to anyone who had contact with Russian officials during the presidential race. Whatever the case, her surprising cameo in the Trump Jr. letter gave some on Twitter occasion to rejoice.

The fact is that Democrats hate the left more than they hate the right.

Their hatred is most evident when people who are truly on the left dare to make the case for political change. When Al Gore and Hillary Clinton won the popular vote but lost presidential races in the Electoral College, Democratic Party scorn was directed solely at the Green Party and their voters. In both elections there were far more instances of registered Democrats voting for George W. Bush and Donald Trump respectively. One would think that they would be marked for condemnation.

Instead the Democrats show their true colors, excusing and placating the turncoats in order to make the case for “lesser evil” neo-liberalism and imperialism.

The Russiagate phenomenon makes Green Party presidential candidate Jill Stein an even bigger target. Stein visited Russia in 2015 and attended the RT network’s anniversary dinner. She was seated at the same table with Vladimir Putin, although the two never spoke. This simple act is now being included among the flimsy so-called evidence that the Russian government interfered in the election. The war party is an important part of the duopoly and leading Democrats are reveling in their opportunity to make political hay.


With all of the other excuses they could use for losing an election they should have won handily, blaming Jill Stein is, frankly, unhinged.  The self-examination and remediation needs to come from within Team Jackass, and by all appearances they haven't learned a goddamned fucking thing from 2016.  I'll put on my "sexist AND racist" flak jacket now, for when I eventually have to start criticizing the next Chosen One, Kamala Harris, who is following in Hillary Clinton's footsteps all the way to the Hamptons for fundraisers.  Already.

The Democrats are a lost cause; hopelessly lost, without a clue as to how clueless their latest rebranding is.  And this shit isn't funny.  It's the reason we have Justice Neil Gorsuch instead of Justice Merrick Garland, for one small thing.  Imagine being so weak that Mitch McConnell can kick your ass every single day, even as a dying John McCain kicks his.

They could, of course, seize the initiative and run on single-payer, but even those hideous California Democrats Greg Abbott complains about can't get on board with that, and when a Republican senator proposed it as an amendment to the repeal of Obamacare last night, Bernie Sanders convinced Schumer and company that the move was a trap.

(T)he amendment was meant to expose ideological differences among the Democratic party and its supporters — and distract from efforts to stop the repeal of Obamacare.


That's four-for-four on senators up for re-election in 2018 in states Trump won in 2016.  If I weren't so nauseated thinking about shitty Blue Dogs, I'd Google up some polling about the popularity of Obamacare and single-payer in their states.  Instead I'll just send up the chant for their campaigns: "We're not stupid! We're not stupid!"

Caitlin Johnstone never is suggesting that real progressives should compromise their positions in any way but the Ignorant idea of party loyalty to either one of the two political parties who are really not that different is garbage. Attention should be paid only to the issues and hopefully some will begin to see the light over the propaganda. This is a well known position also of Ralph Nader who wrote a book on the topic.
Barbara Mullin

my collaboration to the world.... for TRUE PEACE PLEASE CONSIDER UNITING ALL FOR THE ACCEPTANCE OF ALL.... globally growing exponentially!...get on the marches for peace...become a global human.....join the global green party where common sense and justice are the priorities.....people peace and planet FIRST OVER PROFITS!....just this one rule could and will change so much!.....it take each and every single one of us... .make it happen!....uniting the world not keep oppressing it! It's becoming a global movement....the evolution is happening....this louder cycle had to....we want all the same.....Earth 🌎 needs and wants are the same....the enlighment age......we must keep moving... G L O B A L L Y....IN ALL CONCERNS WE MUST A P P L Y T H I S !!

for global peace accepting all but not the few is essential as long we could all agreed first in equal justice....for ALL NOT JUST THE FEW....