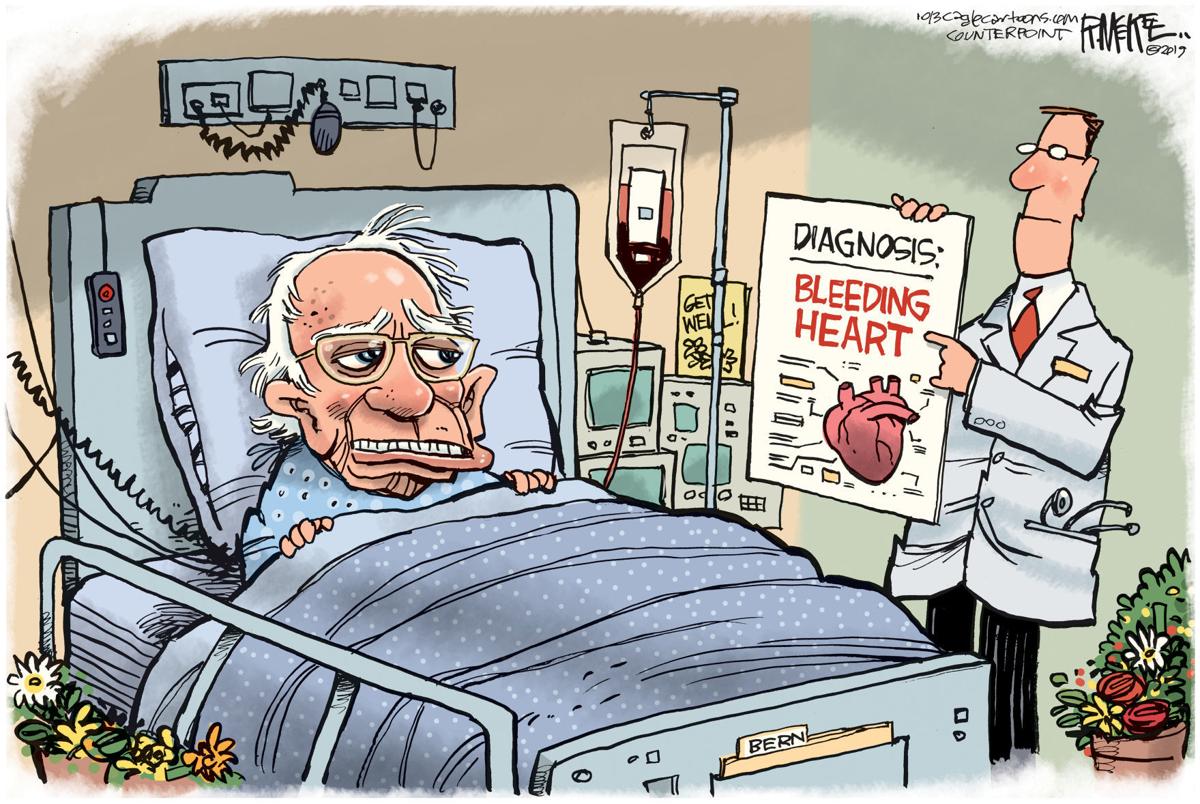 Sen. Bernie Sanders, a week after suffering a heart attack, said that he planned to slow down his pace on the campaign trail and acknowledged that voters would likely consider his health when deciding whether to vote for him, the New York Times reports.

Said Sanders: “We were doing, you know, in some cases five or six meetings a day, three or four rallies and town meetings and meeting with groups of people. I don’t think I’m going to do that.”

He added: “I think we’re going to change the nature of the campaign a bit. Make sure that I have the strength to do what I have to do.”


It's been a very tough week for the Sanders family (and extended family).

"Rainè Riggs reportedly died shortly after being diagnosed with neuroendocrine cancer, according to her obituary. Riggs, a neuropsychologist, was married to Levi Sanders."


It appears his DIL passed on the same day he returned to his Vermont home from Las Vegas, where he was hospitalized.  She was 46 years old.


Today @BernieSanders emerged to take a walk with @JaneOSanders. It is the most we've seen him since he suffered a heart attack. While his recovery continues, his campaign plugs along.. including releasing a major policy on campaign finance.
We talked about it w/ @BrookeBCNN. pic.twitter.com/TQzKgsAjDf
— Ryan Nobles (@ryanobles) October 7, 2019


All of the other candidates wished him well, but Beto was particularly effusive.


Beto O’Rourke on whether the physical fitness of a candidate matters: “Yes it does. But if you’re asking me about Bernie Sanders specifically... I have no fears.” Says there isn’t a more energetic candidate in the race.


I'm a photographer. This is atrocious white balance. Any videographer/photographer that is even semi-professional could have only done this on purpose. It's 100% intentional. https://t.co/3l9GCEL7VP
— BernieOrBust🌹 (@BernieBust) October 9, 2019


After presidential candidate Sen. Bernie Sanders suffered a heart attack last week, he used the experience to explain why he is pushing so hard for his Medicare for All plan. Sanders’s plan would expand and improve Medicare so it covers the whole country with no fees, co-pays or deductibles.

“I am more determined than ever to fight alongside you to make health care a human right,” he said in a tweet.

Yet many critics of single-payer healthcare took a cynical approach and used Sanders’s misfortune to spread blatant lies about his health care plan. The most common smears suggested Sanders “would be dead” now if his health care proposal were law or if he lived in Canada, which offers its own Medicare for All system.


There's more there if you can stomach it.  Along these lines:


.@NBCNews EXCLUSIVE: In his first interview since his heart attack last week, @SenSanders speaks with @HarrySmith.


Tonight, to be clear.  Update.  One more item before we move on.


Sanders had accepted an invitation from the Human Rights Campaign Foundation to appear at the event, but has canceled events related to his 2020 presidential campaign last week after a heart attack in Nevada. His campaign told CNN that the senator will still participate at its primary debate on October 15 in Westerville, Ohio.

The October 10 event in Los Angeles will air from 7:30 p.m. to 12 a.m. ET and feature Democratic presidential candidates appearing back-to-back throughout the evening and taking questions from audience members and a CNN moderator.

The town hall, which HRC bills as the "Power of our Pride," will air exclusively on the CNN television and digital platforms and coincides with the 31st anniversary of National Coming Out Day on October 11.


(All times below are Eastern.)


To the horse race:


And with that Quinnipiac poll, Biden falls out of the lead on the RCP average for the first time all year. Now a co “front-runner” with Warren.


Warren’s new lead in national polls comes on the back of a Quinnipiac poll, released on Tuesday, which shows her leading the Democratic field: 29 percent of registered Democrats and Democratic-leaning voters said they would vote for her if the primary were held today. Former Vice President Joe Biden, now in second place, received 26 percent of the vote in the same poll. Sen. Bernie Sanders (I-VT), typically considered the other frontrunner in the race, had 16 percent.

The poll’s questions about the Democratic primary had a margin of error of 4.7 percentage points, so Biden and Warren are in a very close race. Notably, Warren also appears to be the only candidate with a steady upward trend in the RealClearPolitics polling average.


Warren still has questions to answer about her personal story.  But she's rising in the polling because she's broadening her base, adding some of Biden's African American support and some of Bernie's working-class voters.  She's building out Texas, with a new hire and an endorsement that cuts against Nancy Pelosi.  And she's essentially the only candidate at the moment whose polls and money numbers are both moving in the right direction.

The money raised by the Democratic candidates was not completely in sync with their standings in the polls. (Biden and Warren) are the frontrunners in the polls, but their fundraising fortunes diverged sharply. Warren raised $23.9 million dollars while Biden reported only $15.1 million.

(Sanders and Buttigieg) lag in the polls but they were very successful on the fundraising front. At $25.1 million, Sanders raised more money than any of the Democrats while Buttigieg raised $19.1 million even though he doesn’t break double digits in the polls. After two straight strong fundraising quartets, Mayor Pete has the resources to raise his visibility to the level of Warren, Sanders and Biden on a national scale.

The other candidates, like Sen. Kamala Harris with $11.6 million, were behind the rest of the field in polls and in money. These candidates need money desperately to raise their name recognition in the hope that increased visibility will bring more votes.

Harris may have to bet the farm on strong showings in Iowa and New Hampshire to raise more money. But Sanders, Warren, Biden and Buttigieg have the financial flexibility to spend money nationally, which is important with the deluge of states including California and Texas that have early state primaries.


Could we actually have just a four-horse race in thirty days?  (Yes, I'm counting Steyer and Delaney and Yang, the self-funders, out.  We'll have them around to kick well into next year, or until they get tired of blowing their respective wads.)  Biden's in the biggest trouble, with both his polling and his fundraising slumping.  Ross Ramsey at the TexTrib is smugly carrying a couple of #TXSen torches for Beto and Castro.

Let's conclude this midweek update with these items.

-- Maybe it's the DNC in the hottest water; they're having to beg for help now from the very people they have threatened to screw over with the debates.

In an email to donors and forwarded to CNBC, Chris Lowe, the committee’s deputy national finance chair, listed two events in New York in October that will feature Sen. Kamala Harris and former Secretary of Housing, Julian Castro. Harris’ fundraiser is dubbed the “DNC Chairman’s Dinner.”

Separately, a DNC aide sent CNBC a list of other events this month, which will include a “chairman’s dinner” in San Francisco with billionaire candidate Tom Steyer and Sen. Elizabeth Warren headlining the “Women Will Vote Gala.” Warren’s event will coincide with the Women’s Leadership Forum Conference in Washington. All proceeds for these fundraisers go to the DNC and the party’s infrastructure, the aide added.

The latest Federal Election Commission filings show that in August, the Republican National Committee raised just over $23 million and have $53 million on hand, while the DNC brought in $7.9 million and had $7.2 million in debt. Meanwhile, Trump and the RNC combined in the third quarter to raise over $125 million.


Bernie Sanders has a plan that would fix all of this.  I'm just sayin'.

Donald Trump has divided the country, communities and families like no other president in recent times. In Forest County, in the upper reaches of rural Wisconsin, he’s also torn apart the pocket-sized Republican party.

“I had a really good friend,” said Terri Burl, chair of the county GOP. “She was vice-chair of the Republican party. I’ve known her for so long. We went to the conventions together. Now she’s a Never Trumper. We don’t speak.”

The friend, Jennifer Nery, was never a Trump enthusiast but she voted for him as a loyal Republican and under pressure from a sister who was deeply hostile to Hillary Clinton. Now she regards it as a mistake and identifies with the “Never Trump” movement in active opposition to the president.

“I’ve always voted Republican. I don’t think I’ve ever voted for a Democrat. I will be voting Democrat in 2020,” said Nery, a semi-retired farmer who looks after rescue animals. “It’s caused internal strife with some of my family members who said: ‘Jennifer, but Hillary …’ I voted the least of two evils but now I regret every minute. If could go back in time, I would have cast it for Hillary.”


Can the Democrats screw this up a second time?  Forget I asked that.
Posted by PDiddie at Wednesday, October 09, 2019