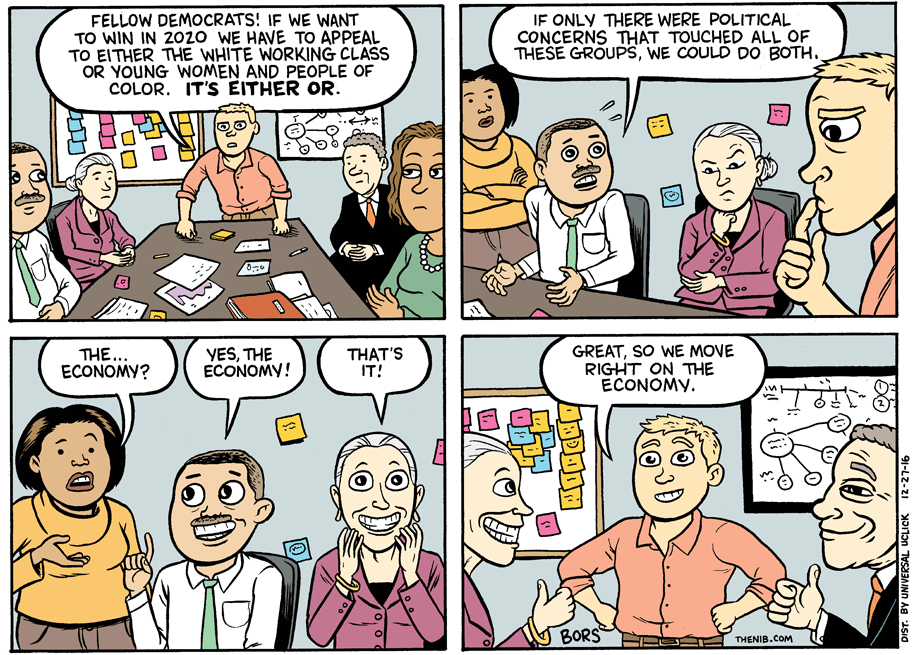 The Elizabeth Warren-Bernie Sanders wing of the party continues to tally a combined total in the mid-50s [in the Daily Kos bi-weekly straw poll], just as it has for months. Joe Biden seems to have gotten a slight sympathy or rally-around-the-flag bump in some outside polling, but we don’t see much of that here. Everything else is pretty much on-the-dot from last week. The only somewhat notable difference is Andrew Yang, but all that means is that his fan club is getting better at spamming this poll.


Kindly observe that when anyone besides his chosen one so much as slightly improves, their supporters are "spamming" his poll.  When his favorite wins, it's a reflection of the intelligence of the online community he has built.

While 60,277 votes is a lot, and close to our record high, the static results to suggest a pause in analyzing the presidential field as Impeachment rages. It would make sense, while all these candidates are presumably out and about and campaigning, it’s hard to care overly much about it as the news out of DC is so relentless and meaningful. We are witnessing history in real-time, and there’s plenty of primary campaign left to wage. We can take a break from that and focus on the more immediate threat.

But the question then becomes, does this set the field down in stone, benefiting Joe Biden and Elizabeth Warren, or is it temporary? Heck, we don’t even know for sure right now whether this is a Daily Kos-only phenomenon or one that is reflecting the outside world as well.


A glance at Real Clear Politics would answer this.

Yet, while we can’t answer all those questions just yet,

Yet, while we can’t answer all those questions just yet, it is clear that Warren has locked down about 2/5th of the vote on this straw poll, as she’s been at that level for two [three, actually] months now. Can something knock her down? That’s always within the realm of possibility, but she’s running a picture perfect campaign [thanks to MSNBC, CNN, and now her own Snopes]. Talking to campaigns, she has the best organization in Iowa and Nevada [debatable]. She’s got home field advantage in New Hampshire [false; essentially all three front-runners can make this claim, which is why the polling gyrates wildly]. She’s lagging in South Carolina, by quite a bit, but she has started to make inroads with the Black vote (her biggest weakness, by far) and in national polling, is approaching 20% of that vote.


Warren's been cruising.  She made a punishing crackback block on Jacob Wohl yesterday on top of what has been a very good month of September.  So where are those fundraising numbers?

Sanders’ mid-teens here is the same mid-teens he’s seeing in national polling, a sort of frustrating purgatory for him. It’s enough to keep him in third place (and even some seconds here and there), but that number reflects his hardest-core base of support. He’s shed much of the 40-45% he had last cycle (and over 60% he had on Daily Kos!), with no real idea how to grow beyond that [laughably false]. Saying “I thought of that first!” isn’t a winning strategy. Because first of all, someone thought of it before him, inevitably (liberalism has been around for a long time), and second of all, most people care about the movement, not any one individual. [Tacky and incorrect.]

If Sanders was the best messenger and vehicle to enact those policies, he’d be doing better. It’s that simple.


Most of this graf is spite, but there is no denying that Bernie engenders a lot of animosity, so Kos' remark at the end is, unfortunately, accurate.

Meanwhile, Biden doesn’t appear to be losing much of his Black support. His resilience with that vote has proven frustrating to a lagging Kamala Harris (who is retooling her campaign, one that, uh, didn’t have senior staff meetings until last month), But no one loves him or his campaign, he doesn’t draw crowds, his advisors keep him as hidden as possible to avoid the next inevitable gaffe, and his 1980s-era campaign and message are increasingly out of sync with modern today’s zeitgeist. A strong Harris [or Cory Booker] would’ve been a better bet to knock him down, taking his base of support away. Her inability to do that has given Biden extra life.


Here are three good reasons why Biden is no longer the front-runner.  It's really no mystery why the core Democratic vote, African Americans, has stuck with him so long; they roll with the establishment, always.  I saw this personally in 2008, when black Texas Democrats in the primary continued to favor Hillary Clinton over Barack Obama.  See if you think Perry Bacon at FiveThirtyEight explains it pretty well; I think he does.

Buttigieg can raise money ($19 million this last quarter), but it’s not translating to support. Not sure how it can, when he’s going around being a jackass and declaring himself the Next Joe Biden, as if that’s what anyone outside of Wall Street is clamoring for.


Boot Edge is by far the worst of the top five.  Beto has had enough of Petey's BS.


How could you call mandatory buybacks a “shiny object” in front of March For Our Lives? pic.twitter.com/wSg6ItQT2K
— Beto O'Rourke (@BetoORourke) October 3, 2019


"I was really offended by those comments," O'Rourke told reporters after a gun control policy forum in Las Vegas on Wednesday. "And I think he represents a kind of politics that is focused on poll-testing and focus-group-driving and triangulating and listening to consultants, before you arrive at a position."


To this I might add: "Congressman Pot, please meet Mayor Kettle."

Let's move on to the debate next week in nine days, and the one in November.

The DNC has made it progressively harder for presidential candidates to qualify for the primary debates. Here are the requirements for the upcoming debates and which candidates have qualified, so far. https://t.co/owAJSRvQXH
— NYT Politics (@nytpolitics) October 2, 2019


We know already that the twelve above will appear together on one evening: Tuesday, October 15, live on CNN's various platforms.  That's too crowded.  This debate should have been split over two nights.  My feeling is that the DNC is trying to shield Biden from prolonged exposure.

(Rant: I find it ridiculous that a guy can raise $10 million fewer dollars -- using big-donor fundraisers -- than his third-place rival taking only small donations, have his eye spontaneously bleed during a debate with no one calling for him to drop out ... and still be considered the front-runner for the nomination.  "Because that's what the polls say"?  The polls that ask a few hundred people with landlines who answer their phones?  Those polls?

And this is the best way we have to survey American political opinion in 2019.  /rant)


Here is a closer look at the five candidates who have made some polling progress for the Nov debate, but have not yet qualified:@AndrewYang - 3/4@CoryBooker - 3/4@TomSteyer - 3/4@BetoORourke - 1/4@amyklobuchar - 1/4

This will focus on the critical areas for each candidate.
— The Debate Tracker (@TrackerDebate) October 3, 2019

Now for some quick hits. 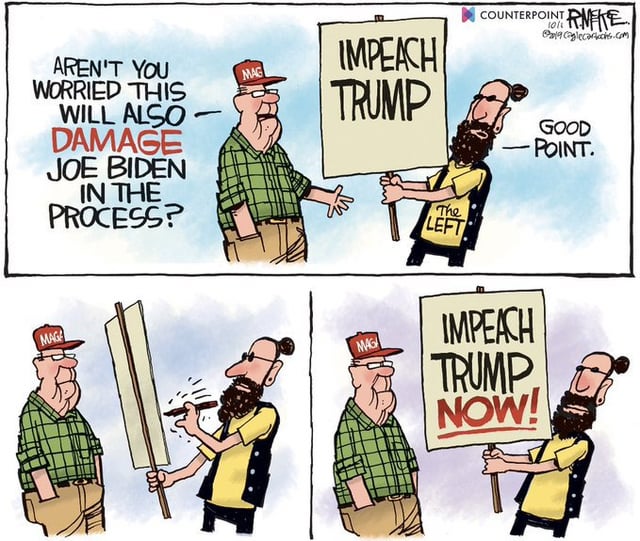 -- Once again, as of this morning:


NEWS: Joe Biden announced his campaign raised $15 million in the third quarter at a fundraiser in Palo Alto. That number puts him $10 million behind Sanders and $4 million behind Buttigieg. Warren has yet to announce her fundraising totals. https://t.co/XzHN7Xa2GH
— Tyler Pager (@tylerpager) October 3, 2019

(Biden) telegraphing that he plans to attack his rivals on the debate stage for a lack of transparency into their finances. Biden is expected to go after Sen. Elizabeth Warren in particular, Bloomberg reported, for failing to disclose details of private income during the 1990s and 2000s from the types of companies that she now lambasts for “rigging the system.”

Warren, as a law professor, did consulting work for private companies that involved her bankruptcy expertise, including advising Dow Corning in 1995, involving a major settlement with women harmed by breast implants. Warren has released her tax returns dating back to 2008.

Biden may be looking to hammer her for hypocrisy, but his charge of a lack of transparency is badly undercut by his own financial opacity -- not decades ago, but in the last two years. Since leaving the White House, Biden, long proud of his wealth ranking near the bottom of the U.S. Senate, began delivering high-dollar speeches to well-heeled clients and raked in book revenue that elevated him well into the upper class. He earned some $15.6 million in the last two years alone, according to financial disclosures released by his campaign.


-- One of the worst things about a truly bad Kamala Harris campaign is that the even more awful puppeteers manipulating her strings are soon going to have to pick another shitty candidate.  My bet is on Boot Edge.


Someone had Tweeted -- and I had reTweeted -- that he had been released yesterday from the Las Vegas hospital that performed his stent procedure.  That, reported by the Fox affiliate in that city, appears to be false, given the information above.