Before I get to my regular Friday presidential Update, here's some recent H-Town political news that I don't have to fill next Monday's Wrangle with.

-- Not content to jack with Austin's mayor over the homeless, our legless, gutless governor also wants to bully Sylvester Turner over Harvey funding.  This is Abbott kicking -- err, piling on the HTX honcho in the election-season beatdown that Bill King and Tony Buzbee have been administering.

Abbott needs a hobby during the legislative off-season that doesn't involve shaking down the wealthiest, worst conservatives in the world for six-figure checks.  Any suggestions? 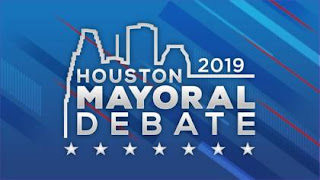 The 7 p.m. debate will take place at the Morris Cultural Arts Center at Houston Baptist University and air live on KPRC and Telemundo.

To qualify, candidates must have exceeded $50,000 in total political contributions, as reported in official campaign finance reports filed with the city no later than Oct. 7. All candidates who met that requirement were invited to participate.


That left out Sue Lovell ... and all of the rest.  This is the John Cobarruvias method of determining candidate viability, to which I do not subscribe.

-- There was also a debate earlier this week.


-- Speaking of qualifiers, some city council candidates have issues.


At least six candidates for Houston city council may not live in the district they want to represent. At least four more have felony records that would seem to bar them from running.


You really should click over and read this if you're voting.  Those with the glaring residency fails include Michelle Bolton (District A), Jeremy Darby (D), Anthony Dolcefino (AL4), Van Huynh (F), and George Zoes (also A).  The felons on the ballot are Cynthia Bailey (D), Derrick Broze (mayor), Brad Batteau (AL5), and Ralph Garcia (also AL5).  I found Nelvin Adriatico's explanation of residency acceptable, but YMMV, as it might in each case.

-- Houston Firefighters endorsed just two incumbents, Greg Travis and Michael Kubosh, both Republicans.  In fact their list is heavily weighted with conservatives.  The union passed on giving any of the folks running in B, I, K, or AL1 a thumb's up.


The union has boots on the ground working precincts for their mayoral choice, Dwight Boykins.  And extending their squabble with Turner, 3000 of their rank and file signed a petition declaring 'no confidence' in the fire chief, Sam Peña (who reports only to the mayor).

-- The uncertainty surrounding the state's possible assumption of HISD administration is clouding the local school board races.

This November could bring four new faces to the embattled Houston school board. But candidates are finding uncertainty about the board’s future is one of their biggest challenges on the campaign trail.

Judith Cruz, who is running against board president Diana Davila in District 8, said that as she visits with voters, she’s often asked if there will even be elections because of the looming threat of a state takeover of the Houston Independent School District.

“The question keeps coming up even though I keep addressing it and I feel like others are, but there’s still so many unknowns and it just seems such weird timing to have elections if the state is going to come in,” Cruz said.

It’s widely expected that Texas’ Education Commissioner Mike Morath will replace the elected Houston school board with outside managers either because of poor academic performance at Wheatley High School, which recently received its seventh consecutive failing rating, or because of the board’s behavior and potential violations of state law and its own rules, as alleged in a preliminary state investigation.


-- Last, the conversation over METRO's $3.5 billion bond issue boils down to the usual conservative "no more debt" versus liberal "necessary improvements" back-and-forth.  (I wish good ol' Open Source Dem was around with a 'bond lawyers' take.)
Posted by PDiddie at Friday, October 11, 2019