Maybe it wasn't her but her county chair (see excerpt below).  Several Metroplex media reported late yesterday that the sheriff had resigned her post -- something she is not (see correction explanation in the comments) required to do, by the way --  in order to challenge Greg Abbott in November of 2018.  That hasn't happened yet.

Dallas County Sheriff Lupe Valdez, a Democrat who has been exploring a run for governor, doesn't appear ready to quit her day job for a campaign yet, despite reports she resigned ahead of a likely bid.

“As she has stated in the past, the Sheriff is considering the next stage in her career," said the spokeswoman Melinda Urbina. "A letter of resignation was not submitted today. The Sheriff will make a formal announcement when her final decision is made.”


When I wrote a little over three weeks ago that she held the fate of the free world, which still includes Texas, in her hands, that wasn't hyperbole.  She changes the game for everybody in Deep-In-The-Hearta, but only if she pulls the trigger.

(And for the record, let's note that Valdez is much more comfortable wielding a firearm than either Wendy Davis or Greg Abbott.)


.@SheriffLupe is one of the only Hispanic female sheriffs in the U.S. She's the daughter of farm workers, a veteran of the U.S Army, a former jailer in a federal prison and a former senior agent of the U.S. Customs Service #tx2018 #txlege https://t.co/yEcGww10Wt
— Evan Smith (@evanasmith) November 29, 2017

Davis, you may recall, had to come clean on her appeal to the NRA Caucus.  Abbott couldn't fire a shotgun without going wheels up, even if his brake was locked and Luis Saenz stood behind him bracing his chair.  But the fetish of guns remains important in a state full of gun nuts.

Gadfly has a bit on her pluses and minuses.

Resignation or no, if/when Valdez commits to make the run as she remains promised to do, she mobilizes the Latin@ vote, the LGBT vote, the RGV vote, and the women of color vote, all of which must surge like Harvey in order to carry some Democrats into Austin (and Washington).  Maybe not herself, but certainly several others.

Like some of these these good people running for the statewide judicial bench. 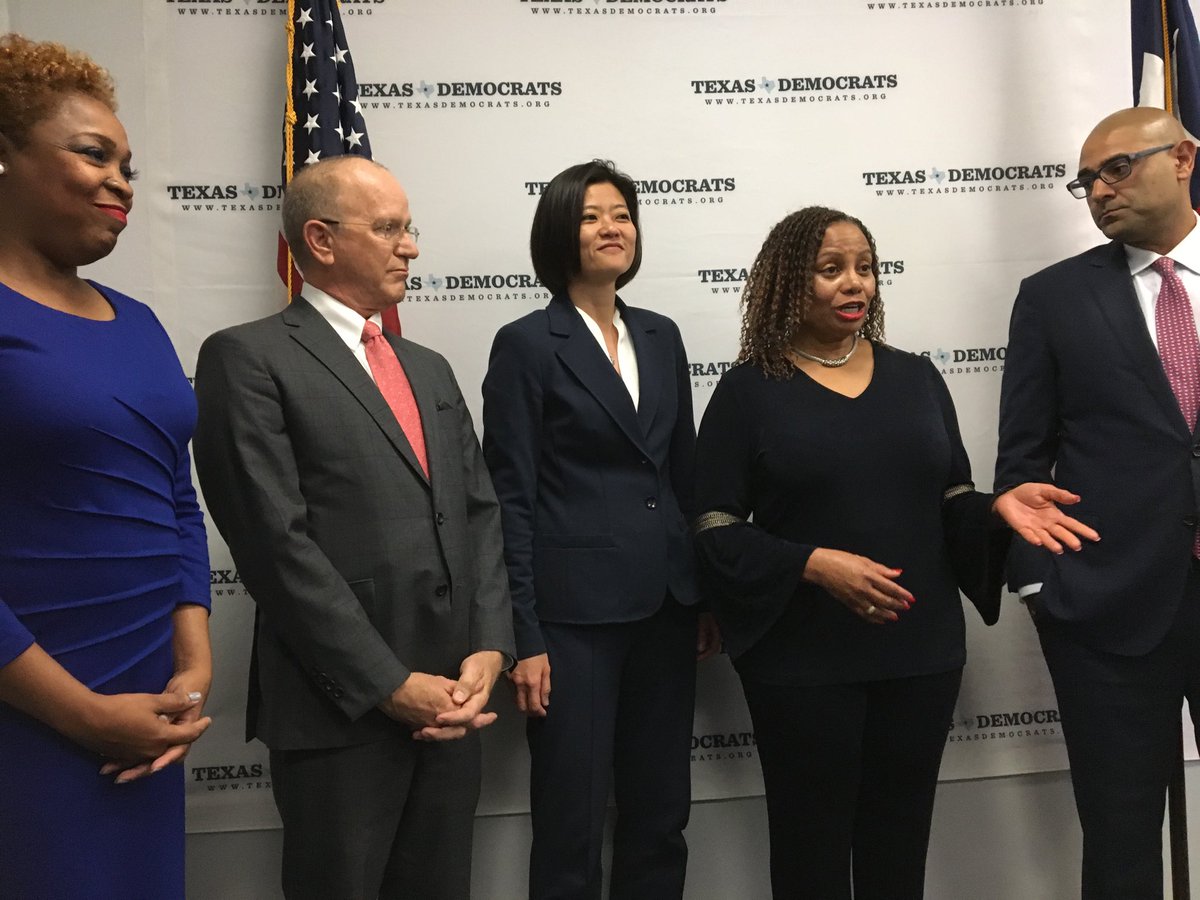 The Texas Democratic Party is hoping their slate of Houston-area attorneys and judges running for seats on the state's highest courts will catch a "blue wave" of anti-Trump sentiment to carry them into office.

But the candidates said Tuesday they know they are facing a steep battle in 2018, given that Democrats haven't won a statewide race since 1994.

"We all know it's a stretch goal," said Judge Steve Kirkland who has served as a judge in municipal and district courts and is running for Place 2 on the Texas Supreme Court to replace Justice Don Willett who is expected to be confirmed to sit on the 5th U.S. Circuit Court of Appeals.

"We've got a bully in the White House. We have a governor that's a bully," said Judge R. K. Sandill, who is running for Place 4 on the Supreme Court against Justice John Phillip Devine. "Texans stand up to bullies."

Six total statewide seats are up for election on the Texas' high courts: three on the Supreme Court and three on the Court of Criminal Appeals, the highest court for criminal matters. Each term lasts six years.

Democratic Party Deputy Executive Director Manny Garcia said the party currently has only five candidates and does not expect a sixth to come forward to run for the Criminal Court of Appeal's Place 8 at this time.


Texas Greens: ^^THAT^^ is your clue.  Get your shit together, your signatures collected and verified, and your asses on the ballot.

All five of the 2018 candidates are from Harris County. Of the four who are judges, none risk losing their current seat on the bench if they lose in the general election.

Judge Ramona Franklin is running for Place 7 on the Court of Criminal Appeals. She presides over the 338 Criminal District Court and would run against Justice Judge Barbara Hervey.

"So many people think the law depends on the amount of money they have," Franklin said. "The perception is wrong, but it is still perception... I think if we can debunk that, I've done my part."

Judge Maria Jackson, a presiding judge in the 229th State District Court in Houston since 2008, wants a seat on the Court of Criminal Appeals. She will run against Presiding Judge Sharon Keller for Place 1.

"I believe in being the judge for everyone," Jackson said. "I'm running because I can be a part of change in the law and making it more balanced."

Kathy Cheng, a Houston-area attorney and first generation Asian American born in Taiwan, largely handles civil litigation, asset protection, commercial and family law. She is the only Democratic candidate who is not a judge, and she's running for Supreme Court Place 6, a seat currently occupied by Justice Jeff Brown.

Kirkland is expected to face off against Jimmy Blacklock, Gov. Greg Abbott's trusted general counsel. The governor announced Monday he would appoint Blackock to the job if Justice Willett is confirmed to the federal circuit court.


All of these judicial candidates are known to me, some better than others.  Kirkland has been profiled and endorsed here in the past, as has have the others (Cheng came within a whisper of a Houston-area state appeals court seat in 2012).  If a blue wave in 2018 comes, they will be the most likely to benefit from it due to straight-ticket voting.  Historically, STV in Texas gives Democrats a slight edge, but that data was taken in presidential election years.  (The Lege abolished straight-ticket voting for 2020, but a lawsuit by Dems could overturn that.)

I'll have your early progressive Democratic slate of candidates forthcoming.  Your piss-off-the-centrist-Donkeys tip: It won't include Lupe Valdez or Andrew White, or Beto O'Rourke, or Sylvia Garcia, or either of the two top fundraisers in CD-7.
Posted by PDiddie at Thursday, November 30, 2017

Her office is on a 2016/2020 cycle, on the resignation from office, so unless I'm misreading state law, I think she does have to resign, even if she hasn't yet.

I'll update my piece on her disclaimer.

There was a good bit of conversation about this three weeks ago when rumors of her potential bid first broke. Evan Smith in particular made "free shot" a point.

I'll correct if necessary, but my inclination/perception is that she needs to campaign full time for the job, which is the purpose of giving up her office.

Oh, agreed on the campaigning full time. The law, IIRC, said that she, or others in similar position would need to resign if her current position has more than 1 year and 30 days left.

So, you gonna believe Evan (maybe a Trib sponsor got it wrong?) or yours truly? :)

I'm going to believe the Texas Constitution, Article 16, Section 65 (at the bottom of this link, which you are interpreting correctly). The Evan Smith Tweet I recalled was in relation to Sylvia Garcia, to whom it does not apply (oddly enough).

Right, that's what I had looked at. And, you see Sylvia got Gene Green's Mafia Don kiss?

I will hold out hope, once again, that the Dems might have an impact on a race for statewide office this century. I have less hope that the Greens will end up running a candidate in one of the statewide judicial races, which require candidates who have been licensed attorneys for at least ten years.

None of us in this state can afford for the non_Republican parties to have many more "rebuilding years," though.

Posted a link to this on the GPTX Facebook page.

The Texas Green Party has several potential candidates for a CA candidacy, and you (or at least I and Gadfly) have voted for them in elections past: Charles Waterbury and Jim Chisholm come to mind without looking at the SOS website.

What they do NOT have is a line on the ballot in 2018, and the requirements for getting that are onerous. Further, the GPTX is unmotivated to do the work, and my personal experience is that their statewide and Harris County elected officials have completely sucked all the fun out of 'dysfunctional'.

The Democratic Socialists are where it's at -- and where it's going on -- these days.

Harry Hamid said...
This comment has been removed by the author.
12:14 PM

Harry Hamid said...
This comment has been removed by a blog administrator.
12:35 PM

PDiddie said...
This comment has been removed by the author.
1:01 PM

I am weighing Houston DSA and the Socialist Alternative groups in town. It might be time to find an alternative to the Green alternative.