Here's an example of a bathroom right here in Houston that both sexes use that isn't disgusting, filthy, or unsafe.  It was in the mechanic's shop where I got my truck's state inspection performed earlier today, and it was clean, smelled nice, and was completely safe for men and women, cis- and trans- alike.  In fact, you have seen bathrooms like these all over the city, and similar bathrooms all over Texas, the United States, and even in European countries if you have been fortunate to travel there.

The terrorists screaming vulgarities on your radio are, in a word, Neanderthals.  They are throwing rocks at the moon.  You should no more allow them to foment panic in you any more than yesterday's stock market gyrations did.

Would you need more concrete proof?  Take a look at this, courtesy Holy Bullies and Headless Monsters, from Equality Matters.

For as long as the transgender community has fought for protection from discrimination in public spaces, conservatives have peddled the myth that sexual predators will exploit non-discrimination laws to sneak into women's restrooms.

That fear has been an extremely effective tool for scaring people into voting against even basic protections for transgender people, which is why conservatives routinely use the phrase "bathroom bill" to describe laws prohibiting discrimination in public accommodations. When conservative media outlets attack non-discrimination laws for transgender people, they almost exclusively focus on bathroom and locker room facilities.

But that fear is baseless -- completely unsupported by years of evidence from states that already have non-discrimination laws on the books. In a new Equality Matters report, experts from twelve states -- including law enforcement officials, state human rights workers, and sexual assault victims advocates -- debunk the myth that non-discrimination laws have any relation to incidents of sexual assault or harassment in public restrooms: 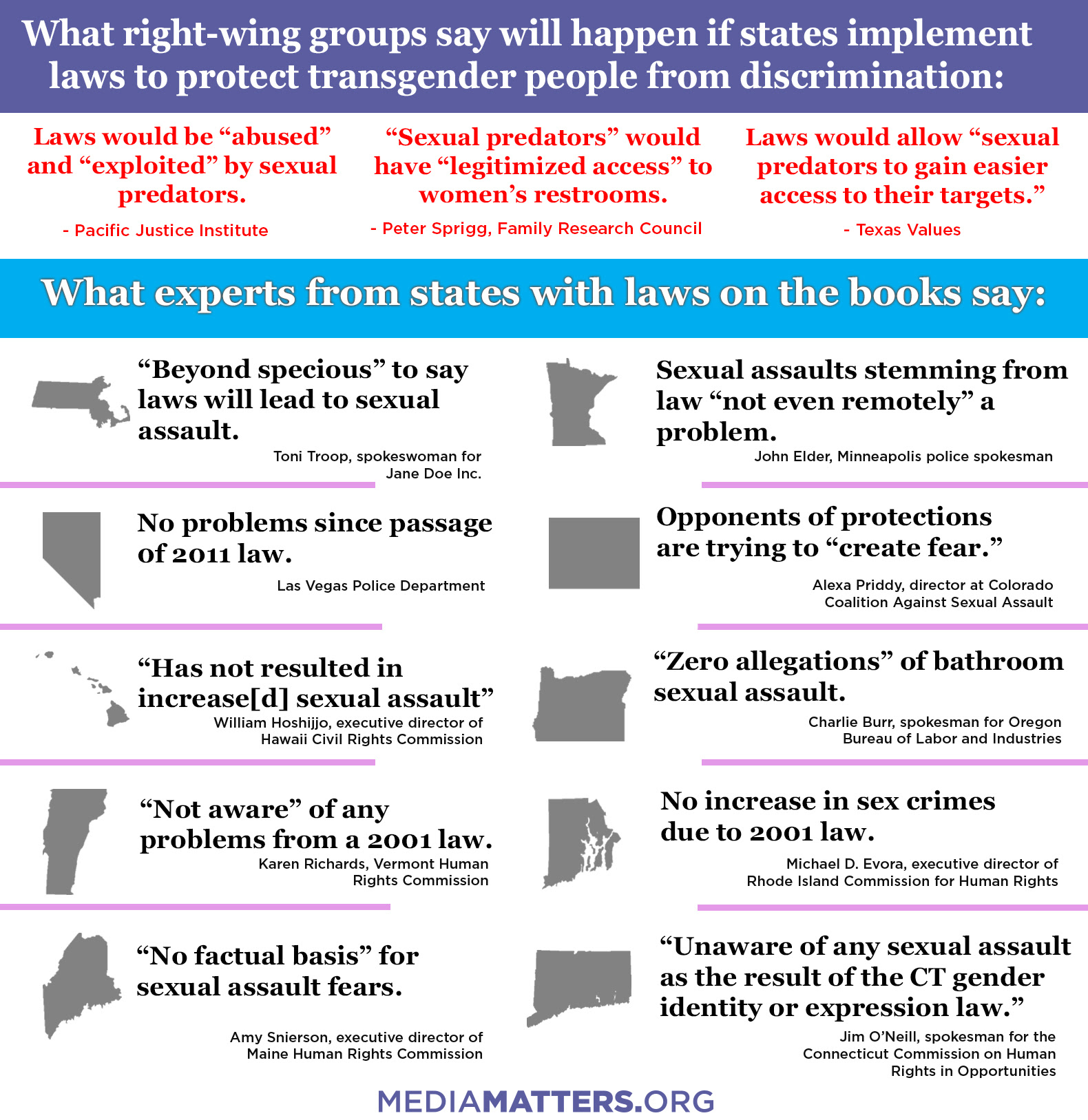 Public restrooms aren't a new battleground for civil rights. Social conservatives frequently invoke "bathroom panic" to justify discrimination against marginalized groups. As Lambda Legal notes, the regulation of bathrooms has been used as a tool to exclude people of color, women, and people with disabilities from participating in public spaces.

But the claim that sexual predators will exploit non-discrimination laws to sneak into women's restrooms is a lie, plain and simple. It's a lie that is unsupported by even a shred of evidence and contradicted by years of experience in states that already have non-discrimination laws on the books. It's a lie that does tremendous damage to efforts to protect transgender people from violence and harassment, which often occur in public restrooms. And it's a lie that persists because conservative media outlets would rather tout made-up stories about sexual harassment than fact-check the anti-LGBT groups who invent those stories from whole cloth.

The Houston Stonewall Young Democrats (HSYD) and the Log Cabin Republicans of Houston (LCRH) have decided to work together to protect the Houston Equal Rights Ordinance (HERO) from being repealed.

One might not expect anything to bring the two parties together, least of all HERO, which has been fought tooth and nail by a group of local conservatives. This is the first time the two organizations have ever participated in a joint effort; in fact, they are the only two-party organizations in Houston working together.

The leadership displayed by HSYD and LCRH can teach us all a valuable lesson, not just about cooperation and collaboration, but also about HERO. As James Lee, president of HSYD stated, “We have come together, despite our differences, because the Houston Equal Rights Ordinance is more important than party affiliation.”

“It is always good when people can come together on a bipartisan basis to come to good legislation,” added Michael Baker, the Vice President of LCRH.


Nobody could have foreseen that.

The HSYD and LCRH put it plainly. “We believe that all Houstonians should have the right to live, work, and prosper in our great city, and HERO will provide them the ability to do just that.”