A very large crowd -- perhaps one thousand -- gathered at Lovett Elementary this evening to hear the six seven candidates for Houston mayor talk about infrastructure, specifically the concerns of some of the locals about the area's severe Memorial Day flooding, and the potholes and pensions whining from the usual suspects.  Bill King also got in a rant about the city's debt obligations.  Several took shots at Steve Costello's Rebuild Houston.  Since I arrived late, there may have been other topics covered that I missed, but nothing about HERO while I was there. 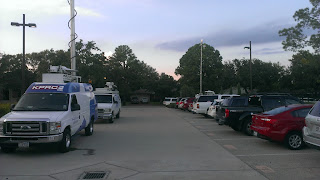 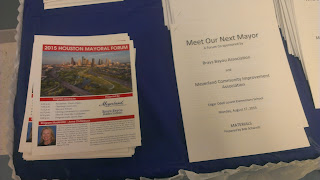 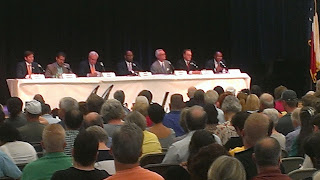 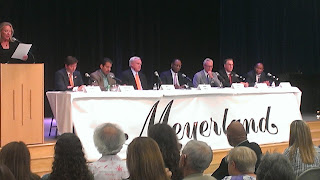 
At #meyerland mayoral forum.If youre concerned about #Houston flooding and drainage, you probably should watch this. pic.twitter.com/QOfAdaTiYX
— NobisNews (@NobisNews) August 18, 2015


I'll follow later with the media accounts in an update.

Updates: From Click 2 Houston with the best video, and Fox 26 (good video but leads with the two worst conservatives in the race, as you would expect from Fox) with the best reporting in the written word.

They certainly don't agree on who should be the next mayor of Houston, but several of the mayoral hopefuls who attended a forum in the flood-ravaged Meyerland area, and other neighborhoods along Brays Bayou, have put out some of their thoughts about what went wrong, and how to fix it.

The most popular answer: complete Project Brays.  The (infrastructure program) run by the Army Corps of Engineers and the Harris County Flood Control District isn't a city project.  So what is a mayor to do?  Lobby for the federal dollars.

State Rep. Sylvester Turner says: "If given the opportunity I would love to work with the Congressional delegation to see if we can speed up that timeline. If we're able to do that, that would make a significant difference."

The project was started in 1994, and received significant updates in the early 2000s.  But its estimated completion year is 2020, about 8 years behind schedule. Turner's sentiments were echoed by Bill King, Stephen Costello, and former Congressman Chris Bell.

Bell also said ReBuild Houston, a city-funded project which was supposed to make drainage better, failed: "It made some areas worse." Adrian Garcia added: "Whatever it is doing, we need to make sure that ReBuild Houston is doing for this neighborhood what it is doing for others."  Garcia also said high water rescue vehicles and alert systems could have saved the lives of some of the 8 flood-related victims.

Attorney Ben Hall said a storm water management and road tunnel system used in Malaysia has practical applications for Houston.  "Once the glass is full, it's going to overflow but if you have two glasses, or a saucer underneath then you have capacity and less flooding."


Hall out-dumbed Garcia for the title here.  Somebody tell "Adrain" that Houston and Harris County already have a plethora of alert systems -- for missing children, missing seniors, traffic congestion, text messaging services for the public to notify them of severe weather conditions, etc.  They don't need another, and they don't need urban assault vehicles driving through high water, pushing it into homes on flooded streets.

Hall's glass is just half empty.
Posted by PDiddie at Monday, August 17, 2015