Not a trace of irony

"No one wants their private e-mails made public, and I think most people understand that and respect that privacy." -- Hillary Clinton, quoted in the New York Times, March 10, 2015


Ted Rall, a couple of days later (just before the NSA was forced by court order to stop reading everybody's e-mail, or so we believed): 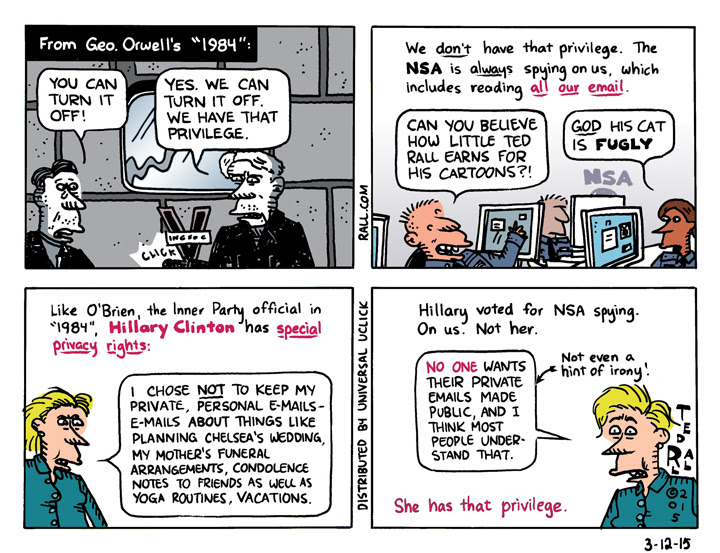 Update: More on Clinton's laughable hypocrisy on the sanctity of the protection of classified emails.

It turns out that at least two of the emails which traversed Hillary Clinton’s personal email account and server were “top secret,” according to the inspector general for the Intelligence Community as reported by McClatchy. To describe that as reckless is an understatement given that, as AP notes, “There is no evidence she used encryption to shield the emails or her personal server from foreign intelligence services or other potentially prying eyes.” The FBI has now taken possession of that server.

When it comes to low-level government employees with no power, the Obama administration has purposely prosecuted them as harshly as possible to the point of vindictiveness: It has notoriously prosecuted more individuals under the Espionage Act of 1917 for improperly handling classified information than all previous administrations combined.


It's not just Julian Assange or Chelsea Manning or Edward Snowden.  Next...

“I want the Iranians to know that if I’m president, we will attack Iran. In the next 10 years, during which they might foolishly consider launching an attack on Israel, we would be able to totally obliterate them.” -- Clinton, at the 2008 AIPAC convention

“I so hope we are able to get a deal next week that puts the lid on Iran’s nuclear weapons program,” she said. “Even if we do get such a deal, we will still have major problems from Iran. They are the world’s chief sponsor of terrorism. They use proxies like Hezbollah to sow discord and create insurgencies to destabilize governments. They are taking more and more control of a number of nations in the region, and they pose an existential threat to Israel.” -- Clinton, from Politico on July 3, 2015

In his book "Unthinkable", the Brookings Institution’s Kenneth Pollack notes that although Iran likely has biological weapons, it has not given them to Hezbollah. In 1982, when Lebanese Shia leaders asked Iran to send troops to repel Israel’s invasion of Lebanon, the then-supreme leader, Ayatollah Ruhollah Khomeini, refused. In 1996, Iran pressured Hezbollah to agree to a ceasefire with Israel. And as Trita Parsi notes in his indispensable book on Iranian-Israeli relations, "Treacherous Alliance", Israel’s then-defense minister, Yitzhak Mordechai, even praised Tehran for its efforts to return Israeli soldiers that Hezbollah had captured. In 2001, according to Parsi, leaders of Hamas and Islamic Jihad vented frustration that Iran was not offering them greater assistance during the Second Intifada. And in 2003, after the U.S. invasion of Iraq, Iran offered the United States a grand bargain that included an offer to cut ties to Hamas and Islamic Jihad and pressure Hezbollah to shut down its military wing if the United States ended sanctions and restored diplomatic ties.


More recent history of the vastly exaggerated claims of Iran's military threat to Israel or the US or anybody else at that link.  Last...

In a video of a private Clinton speech posted to YouTube (in June of 2013), Clinton told a Canadian audience that she hoped the U.S. would elect a woman to the White House because it would send "exactly the right historical signal" to men, women and children. She said women in politics need to "dare to compete" and the nation needs to "take that leap of faith."

"Let me say this, hypothetically speaking, I really do hope that we have a woman president in my lifetime," Clinton said at a women's conference in Toronto on Thursday night. "And whether it's next time or the next time after that, it really depends on women stepping up and subjecting themselves to the political process, which is very difficult."

The former secretary of state told the cheering audience that she would "certainly vote for the right woman to be president." 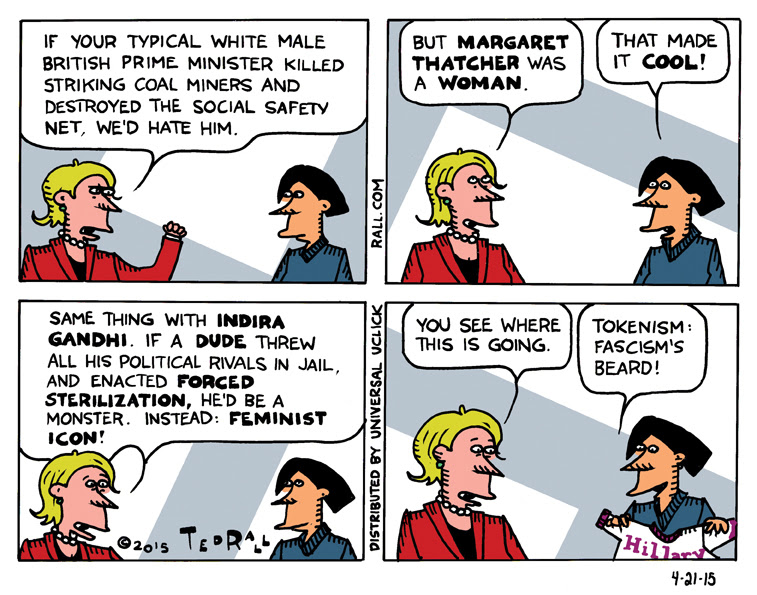