The Chill Down Wrangle

Our red nation is going to turn a little blue this week, but only because of the Alaskan polar vortex (or whatever they're calling the first cold front of the season).  The Texas Progressive Alliance reminds you to find your gloves and scarves for later in the week as it brings you the best of what's left of Texas post-election. 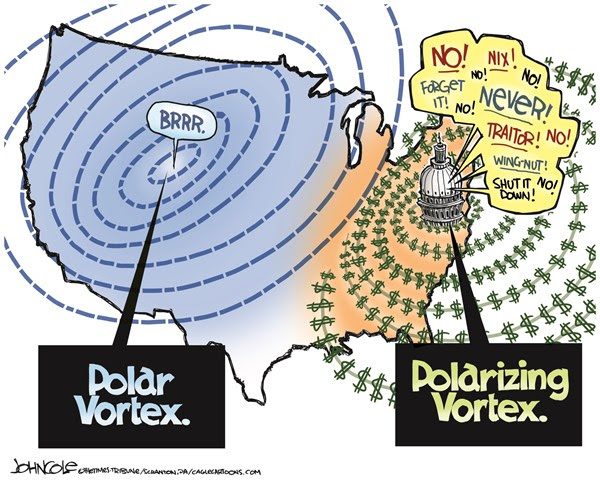 As the Fifth Circuit gets set to hear arguments over Texas' ban on same sex marriage, Off the Kuff reminds us that public opinion is much more favorable towards same sex marriage in Texas now.

Libby Shaw, writing for Daily Kos and Texas Kaos, believes that although this election was lost almost before it began, capitulation is not an option: We Lost the Election but We Are Not Giving Up.

The first beatings in the Republican takeover in Harris County were administered at their election night watch party, as the media that dared to speak during a prayer experienced first-hand the love of Christ and his believers. PDiddie at Brains and Eggs wonders if assaulting a reporter on camera, physically or verbally, is really what Jesus would do.

Despite the ugly results from last Tuesday, CouldBeTrue of South Texas Chisme refuses to be discouraged. We learn from our mistakes. PS: The Valley went for Davis.

WCNews at Eye on Williamson reminds us that fewer than 30% of eligible voters turned out to vote in the 2014 mid-terms in Texas. Needless to say, 2014 turnout was horrible.

Texpatriate bemoans the fact that Texas will never turn blue.

Neil at All People Have Value has a news flash: if Democrats want to change their political fortunes, then their policies have to offer a ray of hope for the working class.

Texas Leftist noted that minimum wage initiatives elsewhere in the United States won approval. Might Texas be next?

In environmental developments, Bluedaze reports on the aftermath of the landslide win for the fracking ban in Denton, and Texas Vox wants to be sure everybody understands the difference between better air and still-bad air.

Other blog posts from around the state...

Lone Star Q observes that Westboro Baptist Church is wading into the HERO fight against the Houston pastors.

nonsequiteuse passes along a few suggestions on what might come next.

John Wright updates us on Connie Wilson's efforts to get a drivers license that properly uses her wife's surname.

The Lunch Tray divines what the elections mean for school food.

Prairie Weather thinks we ought to just go ahead and let the GOP impeach Obama, since his economic numbers are so bad anyway.

And finally, Carol Morgan says that while the voters may have spoken, what they said makes no sense at all.
Posted by PDiddie at Monday, November 10, 2014