How to avoid being a jackass about Ferguson 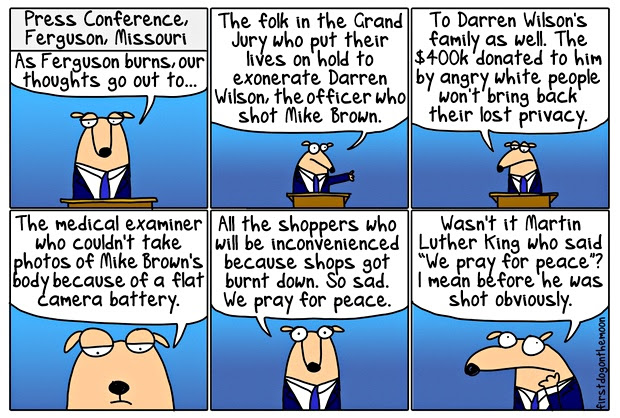 One unpleasant side effect of the unrest in Ferguson MO, and now spreading across the country, is that a lot of white people are making giant asses of themselves on social media. Amazingly, none of them are racist, as they will tell you, but that’s how they’re coming across for some reason. For these people and those poor souls who care for them, here are a few pointers on how to avoid being a huge jackass. You’re welcome, America! Let’s start with an easy one:


Prosecutorial misconduct certainly; most likely corruption.  A police officer without the courage or even the decency necessary for the job, now a millionaire as a result of his fame in conservative circles.  There's more than enough wrong with this fresh stain on America's moral conscience to last for a generation.

But we know it's just going to keep on happening.  Until they can be convinced to stop it.

What do you suppose it will take to do that?
Posted by PDiddie at Saturday, November 29, 2014

I also find that the use of the term "thug" is not helpful and usually a harbinger of worse statements to come.

You mentioned enough moral bad conscience to last a generation.

Well, that's probably about how long it will take.

For the oldest generation to do, and the generation below it, its more wingnut members to maybe get old enough that a few of them mellow out.