Disillusionment abounded on Election Night locally, as the blue slate came up short everywhere.  It began and ended with straight ticket voting, which the Republicans led in mailed ballots by a 54-46 margin, padded with a 56-44 win in early voting, and closed out on Election Day at 53-46.  The one percent remaining went to local Greens and Libertarians.  That averaged out to 54-45-1, or a 44,000-vote countywide bonus for the Reds over the Blues.

Most of the political advertising that arrived in my mailbox this cycle was from First Tuesday, a PAC controlled by Houston attorney Dave Mattheisen.  Mattheisen has long been the county's liberal kingmaker; he recruited and screened prospective judicial candidates for Gerry Birnberg, the HCDP chair before Lane Lewis.  I received by my count five large card mailers from them, the last of which arrived at end of EV and looked like this: 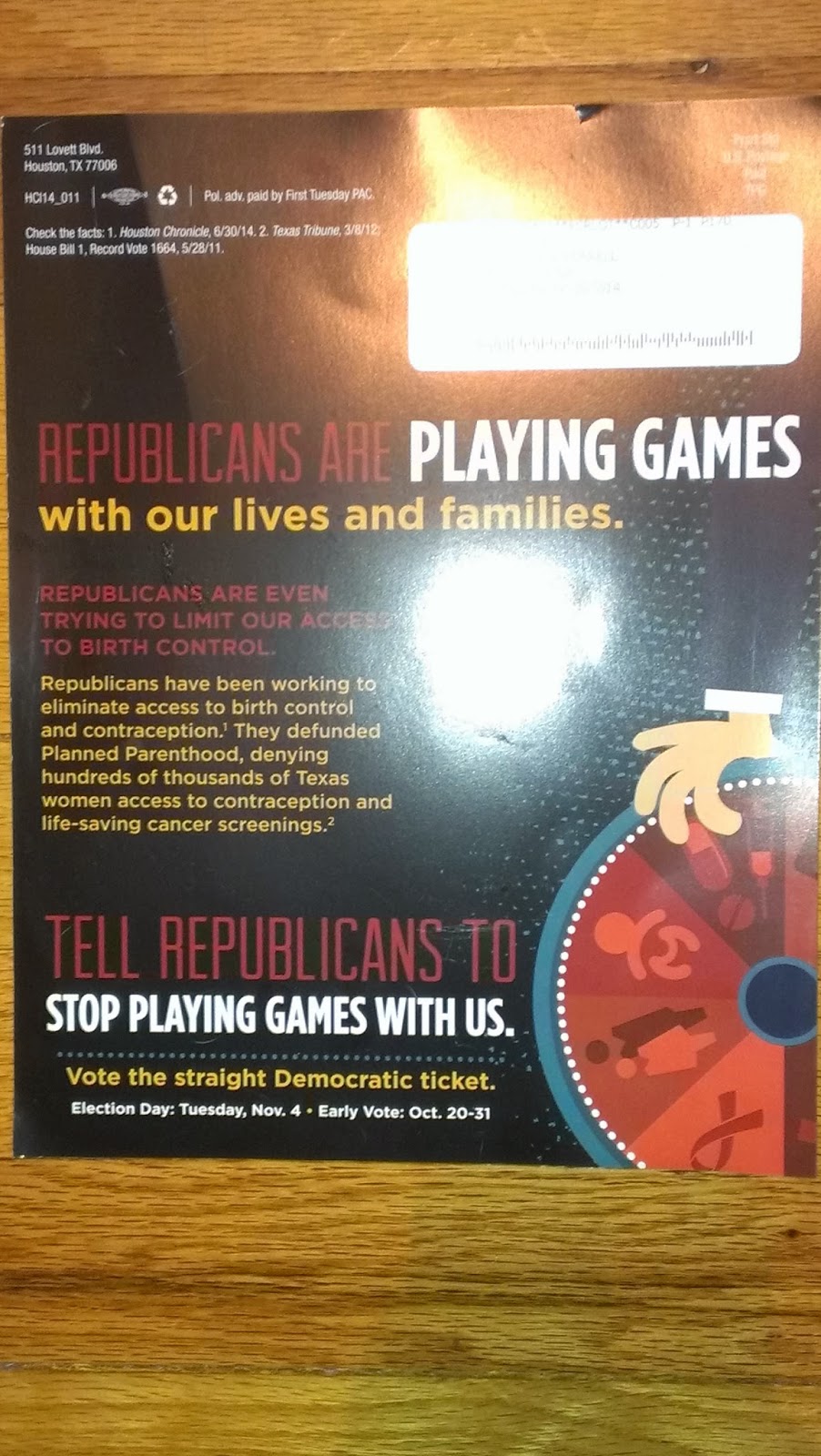 Here's a picture of all the mail I got from First Tuesday (left and across the top), the HGLBT PAC, the Houston Stonewall Young Democrats and HCDP (the three at the bottom), and the Texas Association of Realtors advocating a 'yes' on Prop. 1 (the three middle right).  I also got a card from John Culberson (fuck you, asshole) and from Borris Miles, my state representative. 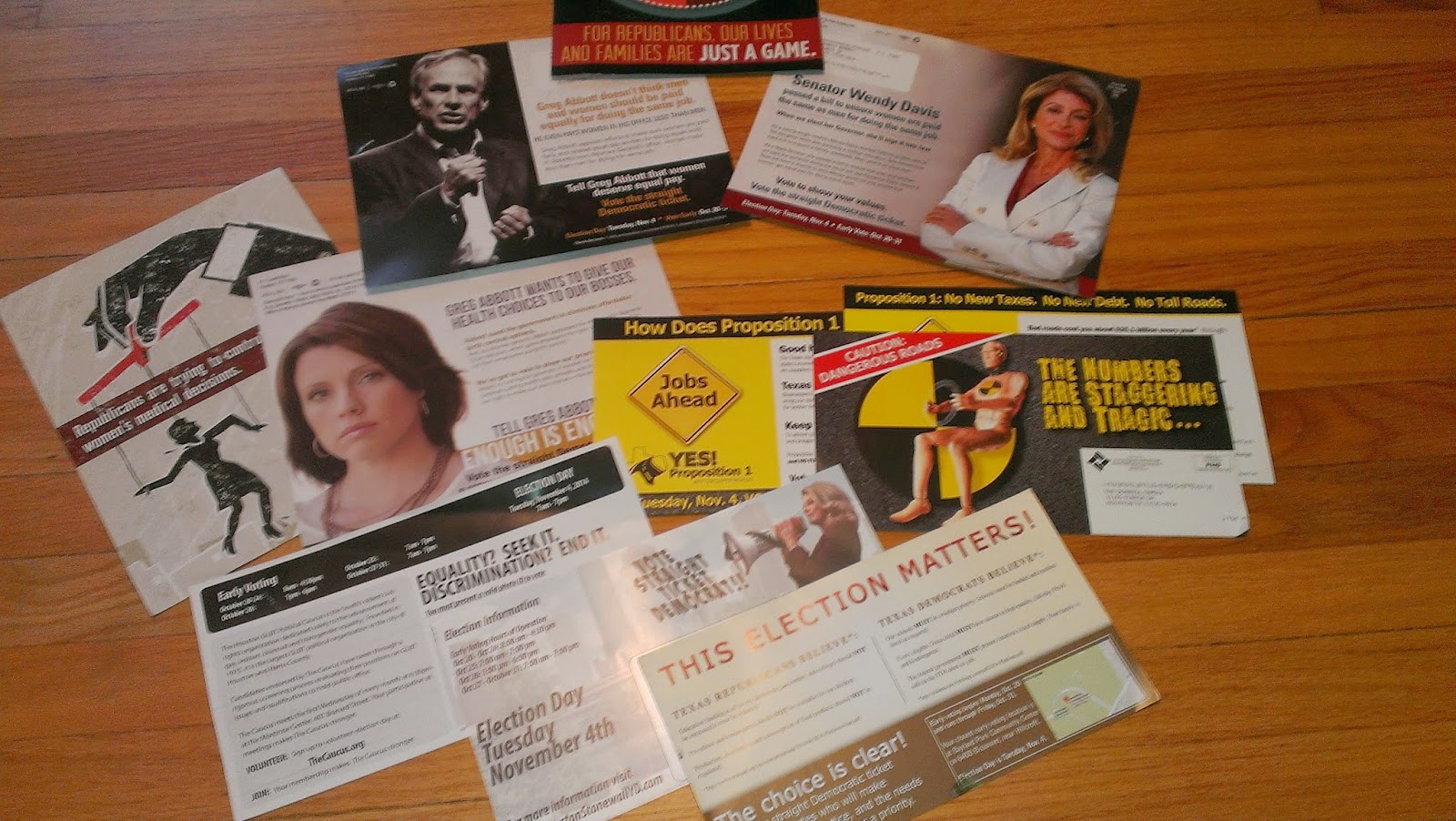 Maybe you can see that the partisan pieces are almost all promoting a straight-ticket Democratic ballot vote. I said more than my piece on the wisdom of this.  Further, the First Tuesday cards were aimed squarely at women voters, which we now know were lost to Abbott.

You might feel a little down, but I doubt you feel as sick to your stomach as Dave Mattheisen.

On to the county results.

At the Harris County courthouses, the story was the same.  The lone Democrat on the 14th Court of Appeals, Jim Sharp, lost 57-43 in the district and lost Harris County by nearly the same spread as the straight ticket votes, 54-46.  Kyle Carter, the challenger to Chief Justice Kem Frost, lost by almost exactly the same margins.  Click here and go to page 17 if you like.  Some judge candidates closed it to 53-47.

In the county's marquee tilt, District Attorney Devon Anderson defeated Democratic challenger Kim Ogg 53-47, so it's clear that only a small number of Republicans crossed over.  Thanks anyway, Big Jolly.  The lone challenger left standing to county judge Ed Emmett, Green David Collins, got over 80,000 votes and almost 17% of the total vote.  There were 200K undervotes in that race, ten times as many as there were in the DA contest.  A Libertarian, Brad Miller, got 4% of the vote in the County Criminal Court #10 race, won by the Republican D. J. Spjut  52-44 over Democrat George Barnstone, who organized the Final Friday events locally.  And a Green, Clint Davidson, got 2% of the vote in CCC #13, which was won by R Don Smyth over D Jason Luong, 54-44.

And Clerk Stan Stanart got another four years to figure out how to do his job.  The numbers were 54.3- 45.7 over Ann Harris Bennett.  Seeing a trend yet?

Proposition 1, taking money out of the RDF to give to TxDOT to fix some of our roads, carried Harris County by almost precisely the same 4-1 margin as it did the state.  I voted against.

Still some national Congressional races, the Texas statehouse, and a few ballot initiatives that had a progressive slant to them coming.
Posted by PDiddie at Thursday, November 06, 2014

Reportedly, we had robocalls in little old Falls County over the county judge's race. Ridiculous. (I don't have a landline phone, so I didn't get any myself.)