Let's break Texas into five states while we're at it

California wants to subdivide itself into six.  Well, not all Californians. 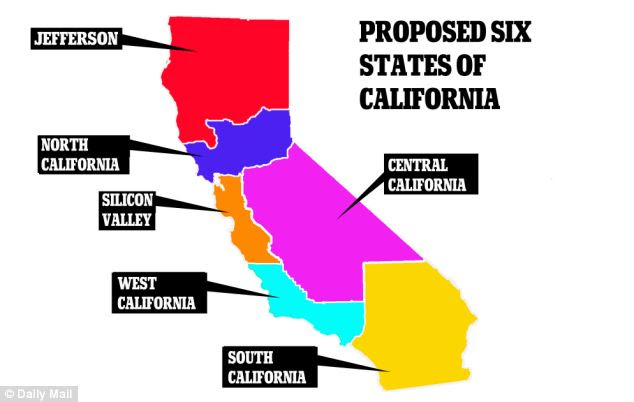 A long-shot effort to break California into six separate states got a boost on Monday, when the billionaire venture capitalist behind the proposal said he had gathered enough signatures to place it on the ballot in two years.


Timothy Draper, a founder of a Silicon Valley-based venture capital firm that has invested in Twitter, Skype and Tesla, among other companies, has been agitating for months for a ballot initiative to chop the most populous U.S. state into smaller entities.

"It’s important because it will help us create a more responsive, more innovative and more local government, and that ultimately will end up being better for all of Californians," said Roger Salazar, a spokesman for the campaign. "The idea ... is to create six states with responsive local governments - states that are more representative and accountable to their constituents."

Don't forget those nine or ten extra Democratic US Senators, either.  They might come in handy.

...(T)he plan has raised bipartisan hackles across the state, and opponents say it stands little chance of gaining voter approval. If it does win the support of voters, it must still be passed by Congress, which opponents say is also unlikely.

"This is a colossal and divisive waste of time, energy, and money that will hurt the California brand,” said Steven Maviglio, a Democratic political strategist who has formed the group OneCalifornia with GOP strategist Joe Rodota to fight Draper’s plan. "It has zero chance of passage. But what it does is scare investment away... at a time when the Governor is leading us to an economic comeback.”

One state, to be called Silicon Valley, would include the tech hub along with the San Francisco Bay Area. Jefferson, named after the third U.S. president, would encompass the northernmost region. The state capital of Sacramento would be in North California, while South California would be made up of San Diego and the eastern suburbs of Los Angeles.

L.A. itself would be part of a state called West California.

Five years ago I blogged about the Texas plan to cut itself into five easy (somewhat conservative) pieces.  My Congresswad, John Culberson, earned "Douchebag of the Week" honors for pushing the idea out on national teevee.  Here's that map again, courtesy Nate Silver's FiveThirtyEight.com.

It's a similar strategy as the one Culberson executed to add a dozen extra lanes to the Katy Freeway, which as we know he succeeded in doing (even as he fought against public transportation, even fighting with Ted Poe about it).  We'll blog more about that another day, though.

Texas divisionism is met with much skepticism itself, mostly from a constitutional perspective, although I suspect this proposal would be as deeply unpopular as California's.  As I mentioned in 2009, that separation might produce four or more Democratic senators -- two in El Norte, minimum one each in New Texas and Gulfland.

This is a fun parlor game, but don't expect to find 10-15 new Democrats in the Senate anytime soon.  As in your children or grandchildren's lifetimes.
Posted by PDiddie at Tuesday, July 15, 2014

Let's make the Trans-Pecos part of New Mexico, instead, which it really still is culturally and certainly was in 1845.