"Every now and then I know it's kinda hard to tell,
but I'm still alive and well."

Alas, no longer. Blabbermouth.net with the news. 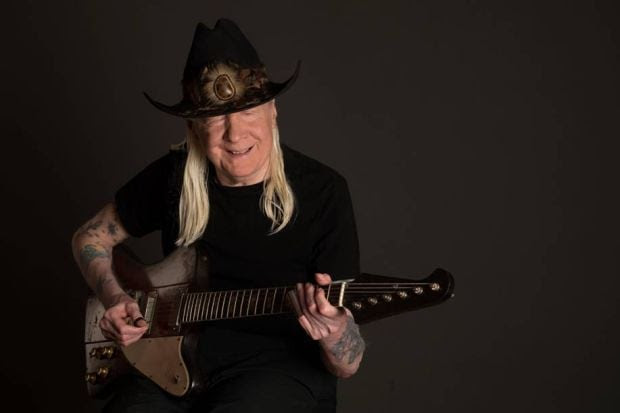 Blues legend Johnny Winter has died at the age of 70. The news was first reported by American Blues Scene and Jenda Derringer, wife of Winter's former bandmate Rick Derringer. Jenda wrote on Facebook: "Johnny passed early this morning in Zurich, Switzerland." She added: "He was not in good health and was very frail and weak."

Born in Beaumont, Texas in 1944, Winter remained active in music for over five decades, earning acclaim as both a guitarist and record producer. His big break came while opening a show for Mike Bloomfield in 1968. Winter’s performance that evening caught the eye of Columbia Records, who quickly signed him to a contract. He was given a $600,000 advance, the largest one ever received at that time.

In the years that followed, Winter would release nearly 20 albums. He was praised for his high-energy performances and elaborate chops, leading to seven Grammy nominations and a nod as the 63rd best guitarist ever by Rolling Stone.

Winter is known for being an original performer at Woodstock ’69. He’s also brother of fellow music legend Edgar Winter.


Here's ten minutes' worth of that performance at Yasgur's Farm in upstate New York, the same summer I spent at Scout camp in deep East Texas as a Tenderfoot.

Most casual music fans knew him only as the brother of Edgar, who had the radio hit Frankenstein in 1972, the year before I entered high school.  So Johnny and his screaming blues guitar was just a little ahead of my formative years... but I caught up quickly.  There would be conflicting opinions on which album to get if you could only get one, but for me it would have to be Captured Live!, which mostly covered classics and came out in my senior year.  I still have the 8-track, in a case in my closet.

Like so many Texas artists of his genre -- the ones from my corner of Southeast Texas alone include ZZ Top, Janis Joplin, Lightnin' Hopkins, Johnny "Guitar" Watson, Johnny Copeland, and Clarence "Gatemouth" Brown -- never mind elsewhere-Texans Buddy Holly, T-Bone Walker, Stevie Ray and Jimmie Vaughn, the Fabulous Thunderbirds, and on and on -- he came to be recognized as a virtuoso of his craft.

A bit more from Blabbermouth.

Speaking to JournalStar.com last month, Winter said: "When I was about 12, I knew I wanted to be a musician. The blues had so much emotion and so much feeling; if you don't have that, you're not going to be good at it."

Asked if there was anything left for him to accomplish, Winter said: "I've never won a Grammy on my own — I'd like to do that. The ones I've got have been with Muddy. I've been nominated a lot of times but never won."

Regarding what he would like his legacy to be, Winter said: "I just hope I’m remembered as a good blues musician."