Of dressage horses and working women 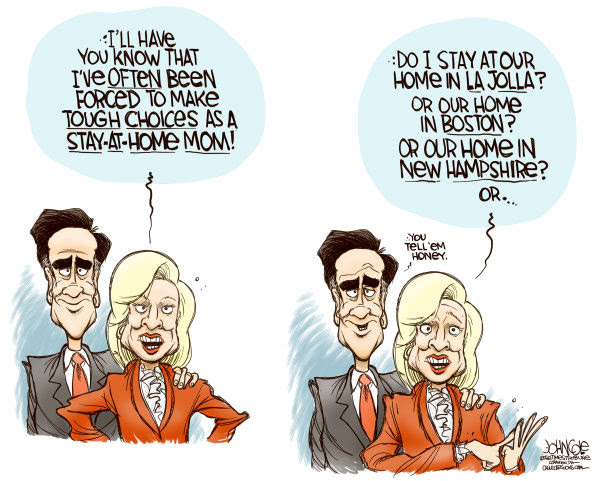 Isn't it remarkable how the Right can contrive an outrage out of thin air?

Ann Romney fought back Thursday against a Democrat who suggested she’s no economic expert because she “hasn’t worked a day in her life.” Raising the five Romney sons, she said, was such a full-time job that her husband, Republican presidential contender Mitt Romney, considered it more important than his work as the family breadwinner. “He would say, `My job is temporary…Your job is a forever job that’s going to bring forever happiness,” Ann Romney told Fox News, wading into a multimedia furor over comments by Democratic consultant Hilary Rosen. “Mitt respects women that make those different choices.”

Rosen apologized to Ann Romney later Thursday for her “poorly chosen” words. “As a mom I know that raising children is the hardest job there is,” Rosen said in a statement. “As a pundit, I know my words on CNN last night were poorly chosen.” “In response to Mitt Romney on the campaign trail referring to his wife as a better person to answer questions about women than he is, I was discussing his poor record on the plight of women’s financial struggles,” Rosen said.

First lady Michelle Obama, a working mother of two, even jumped into the fray with this tweet: “Every mother works hard, and every woman deserves to be respected. – mo.”


Sometimes you just have to marvel at the ability of conservatives to hold onto each other and march and kick like that, all in perfect synchronicity.

For the record, Ann Romney -- stay-at-home mother of five boys (work if there ever was any for sure) -- rides Austrian Warmbloods, a dressage horse. And makes sure you use the French pronunciation of the word. That would be 'dress-SAHJ', rhymes with 'massage'.

Dressage is a sport of seven-figure horses and four-figure saddles. The monthly boarding costs are more than most people's rent. Asked how many dressage horses she owns, Mrs. Romney laughed. "Mitt doesn't even know the answer to that," she said. "I'm not going to tell you!"


Just your average stay-at-home mom, trying to juggle raising five boys, keep track of the help -- nannies, maids, butlers, chefs, gardeners, and the handlers, trainers, and veterinarians responsible for the stabling of her several $100,000-each horses at their four or five houses across the country -- and work in time for a ride every now and then.

However does she manage?

Mitt, however, rides a Missouri Foxtrotter... which of course makes him a man of the people. Cue Fanfare for the Common Man.

Would anyone like more whine?
Posted by PDiddie at Friday, April 13, 2012

Great site! I'm trying to find an email address to contact you on to ask if you would please consider adding a link to my website. I'd really appreciate if you could email me back.

Thanks and have a great day!