As some Democrats prepare to bid a fond farewell to Mr. Potato Head (I will simply say "don't let the door hit ya where the Good Lord splitcha"), the race to replace him heats up. My colleague Ted at jobsanger has already noted the development: 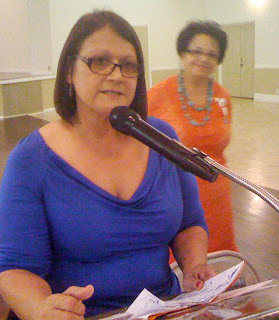 My name is Rachel Barrios-Van Os, and I'm a candidate for State Chair of the Texas Democratic Party. I am running for this office for each and every Democrat and future Democrat to come because we need real leadership and we need to start fighting to win.

It's a sad day knowing that our Democracy is on the line everyday while the Republicans are in power. We have to start fighting harder, we have to fight for our rights and as your new Chairwoman, I promise that I will fight for you.

It has been way too long since the Democrats have rallied together for a statewide victory. I believe I have the progressive vision, integrity, experience and energy that it's going to take to do just that.

I am the loving wife of three-time statewide Democratic candidate David Van Os, and a mother of four beautiful children: Jay, Kay Cee,  Leya and Maya. I have been an activist for the Democratic Party my entire voting life. In my favorite Democratic Party moment in life, I was an active volunteer that helped during the 1980's to bring Ann Richards to victory. I became a Union Member in 1980 nad have always stayed active in the labor movement. I was campaign manager and treasurer for David Van Os, twice for Texas Supreme Court (1998 and 2004), and for Attorney General (2006). I was a candidate for Bexar County Clerk (2010).

During the 2006 Attorney General run, I felt like we needed to do something different  because I didn't think that the party could help us, so I recommended to David that we go to each and every courthouse (all 254 County Courthouses) in the state of Texas and give stump speeches from the steps of the courthouse and we did it. We took the campaign to the people and I believe that 's how we should start doing things again. The people/voting citizens do not feel connected to the Democratic Party anymore and so they choose to stay home.

Well it's time to change that and I'm here to offer my leadership, I'm ready, willing and able.

Currently, I am the administrator, bookkeeper and litigation assistant for a law firm representing labor unions and civil rights. I wear many hats, but I always make sure that the job gets done. When I'm elected to be your next State Party Chair, I will make myself available to work full-time in the office of the Texas Democratic Party. I'm ready to start the job as your next State Party Chair immediately.

Regarding the state of the Party, I believe that something is very wrong when we cannot get one statewide candidate elected into office since 1994. Let's not wait another 18 years to start winning; let's make it happen now. I'm ready to take on that challenge.


Her opponent is Gilberto Hinojosa, generally regarded (until now) as the heir apparent. A third candidate, Fidel Acevedo, awaits confirmation of his candidacy because it may not have been filed in time to meet the deadline.

Barrios-Van Os is, as Ted states, the true progressive in the race (although Acevedo has bonafides as well). Hinojosa is -- probably -- the conservative establishment's choice. Thus we have set up the classic liberal-wing-versus-conservative-faction battle once again. I don't have as much invested in the contest as I would have in years past. I just don't consider myself a member of the Blue tribe any more, mostly because of internecine squabbles like this. But if anyone can turn the TDP back from the right and more toward the left, where it belongs, it's RBVO.

Buena fortuna, Rachel (from a safe distance away, sadly).
Posted by PDiddie at Sunday, April 15, 2012