Fifty years ago, and a hundred years ago

Fifty years ago yesterday, the Houston Colt .45s began major league baseball play in a rickety old stadium at the northwest corner of what is now called the Reliant Park complex (approximately where the Holiday Inn now sits). 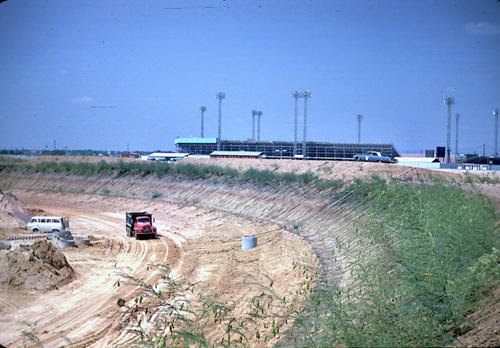 A few years later the team's owner changed their name and moved inside a new ballpark a short distance away. Yesterday was also the 50th anniversary of the opening of Dodger Stadium in Los Angeles, to accommodate a team that had moved out west from Brooklyn a few years earlier. In those days the park was often called Chavez Ravine after the geological formation that was there long before the field, and Sandy Koufax wrote about pitching there -- and the advantage the twilight gave him in the early innings over the hitters -- in one of the first baseball books I read as a kid.

Oh yeah, there was one other brand-new NL team taking the field that year.

I thought I would summarize for this posting, though, the legacy of the man who turned the Colt .45s into the Astros, built a ball field for them to play in that was called the Eighth Wonder of the World, and who accomplished a great deal as both mayor of Houston and Harris County Judge, and whose 100th birthday is celebrated this week: Roy Hofheinz.

Few politicians have shaped our area as much as Hofheinz, who was born 100 years ago (yesterday) in Beaumont. Sure, we all remember the Astrodome, the Astros, the Astrodomain and its surrounding environs, but his mark on this region isn’t limited to what rose out of the southwest Houston prairie in the 1960s.

Not many reading this were alive to remember Hofheinz’s controversial stint as Houston mayor in the 1950s. Even fewer alive today can recall his fast climb from state legislator to Harris County judge, which began in the 1930s.

During Hofheinz’s tenure as mayor, the city saw the completion of several public works projects: Memorial Drive and the Elysian Viaduct provided a fast way to get a growing number of residents out of downtown Houston, a new terminal at Houston International Airport was completed, and the Sam Houston Coliseum and Music Hall underwent renovations.

“He was one of the white progressives that helped change Houston from a Deep South, racially conservative community” to a more progressive town that reflected its growing minority community, said University of Houston political science professor Richard Murray.

For example, Hofheinz oversaw the removal of “white” and “colored” signs over water fountains on city property. Moves like that, that Hofheinz and other civic and political leaders put forward in the 1950s, set Houston apart from other Southern cities during the civil rights struggle.


Here's a excerpt from a biography of Hofheinz, entitled "The Grand Huckster", by Edgar Ray.

Black community leaders asked him to desegregate libraries in Houston. He agreed, but first he called in representatives of press, radio, and television and asked that they hold off any news about the upcoming change until librarians could determine how the mixing of races in their buildings would work. When word finally got around that black children and adults were going to “white libraries,” a woman, prominent in Houston society, complained to the mayor: “I won’t let my children sit by black children at the library,” she angrily told Hofheinz. “I don’t know what they’d catch!” Hofheinz solemnly replied, “Maybe tolerance.”


My first thought upon reading that was to point out to our current mayor what a progressive looks like. A brave one. A proud one. One never afraid to do the right thing, no matter who among the wealthy and powerful the doing of the right thing happened to anger.

As the Astrodome rots into ruin while today's elected officials dither, it is painfully obvious that this city, this county, this state, and even this entire nation cry out loud for visionary leaders like Hofheinz. I just hope there are some out there somewhere.
Posted by PDiddie at Wednesday, April 11, 2012