-- Rep. Borris Miles had an altercation with the True the Vote criminals at the EV poll in Sunnyside.

... Miles said he was there in the first place because a constituent had called to complain about intimidation by poll watchers, including an incident in which a poll watcher bumped a voter. Miles said he spent two hours at the Sunnyside Multi-Purpose Center, 4605 Wilmington, but stayed near the reception desk perhaps 150 yards from the voting machines.

Miles said he witnessed poll watchers speaking to voters, looking over their shoulders as they voted, and walking among the voting machines. He summed up what he saw as: "The Republican/tea party poll watchers that are there intimidating, and the Republican precinct judge allowing it to happen." 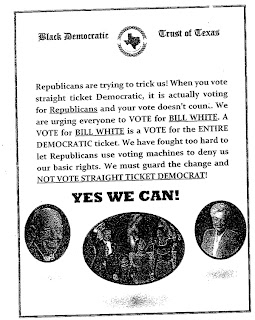 Miya Shay again with the report:

And more from Isiah Carey:

jobsanger and Juanita Jean have more.

"Although there are usually a few isolated occurrences of voter intimidation during the election season, the incidents that took place at polling stations earlier this week appeared to be both organized and systematic. Poll watchers have been reportedly over-stepping the boundaries between observing and interacting in the democratic process by hovering directly behind voters as they entered their votes. The group thought to be behind these acts is known as the King Street Patriots, reportedly tied to some Tea Party activists. The King Street Patriots have deployed poll watchers around the city as they implement their “True the Vote” campaign."

The first opinion (both links .pdf) says that election officials may "designate lines on the floor to protect voters from poll watcher intrusion."

Electronic devices have ALWAYS been verboten inside the poll, but a King Street Thug poll watcher was observed wearing a 35mm camera around his neck at the Fiesta Mart EV location this week, in clear violation of the Texas Election Code but apparently ignored by the election judge there.

-- The King Street Thugs surrendered some of their paperwork, but it doesn't clear up the mystery of their funding: large, anonymous GOP donors.

Though acknowledging the receipt of over $80,000, the King Street extremists refuse to disclose who contributed the money. Incredibly, the group contends that the funds were raised by “passing the hat” at their meetings.

To put this outrageous claim into perspective, it would take 1,600 people contributing $50 each to raise $80,000 while a group of 400 people would have to contribute an average of $200 each.  According to activist participants, the King Street extremists' meeting space could barely hold 200 people, yet they claim to have raised as much as $15,000 at a single meeting simply by “passing the hat.”

More at Off the Kuff.

-- Lastly, the KS Thugs, Karl Rove, and the US Chamber of Commerce are essentially acting as if Citizens United is settled law.

As a nonprofit 501(c)4 corporation, King Street Patriots (KSP) should be allowed to engage in electioneering without disclosing donors or registering as a political committee, and Texas laws to the contrary are unconstitutional, said the Indiana attorney who put together the pivotal U.S. Supreme Court Citizens United campaign finance case. He placed the burden of enforcing regulations squarely on the Internal Revenue Service.

“(KSP opponents) are trying use Texas law to shut up their opponents, to throw them in jail for talking about issues,” said James Bopp Jr., general counsel for the James Madison Center for Free Speech.

Houston tea party spinoff KSP and its 501(c)3 initiative KSP/True the Vote are the subjects of a state ethics complaint by nonprofit Texans for Public Justice and a lawsuit by the Texas Democratic Party, both alleging KSP has broken state prohibitions against corporate campaign contributions — and that it should be registered as a state political committee and have to reveal its donors’ identities.

“The Supreme Court has consistently held that you cannot require an organization to be a PAC unless its major purpose is to be involved in elections. A c4 lobby group’s primary purpose is to educate and lobby, rather than participate in elections,” Bopp said. “Otherwise the IRS wouldn’t let it be a c4. They would say it’s a 527.”

Bopp, who’s currently challenging campaign laws in at least a dozen other states, said it’s clear to him that Texas laws run afoul of the First Amendment when they require 501(c)4 nonprofit corporations to register separate political committees to report coordinated campaign expenditures.

Basically, the Citizens United decision enabled corporate entities to spend unlimited money advocating for or against political candidates, as long as they don’t coordinate those expenditures with the campaigns. While the ruling did not address in-kind donations, such as hosting one-sided candidate forums, the case may have cleared the way for further challenges to remaining restrictions on corporate political contributions.

“Particularly now that the last barrier on many independent expenditures has been lifted by Citizens United — it was the last one in a chain — there will be a lot more attention paid to exactly what constitutes a coordinated expenditure,” said Justin Levitt, associate professor of law at Loyola School of Law.

In Bopp’s reasoning, the underlying assumption is that KSP is abiding by federal regulations on 501(c)4 nonprofits — namely that the organization’s primary purpose is not electioneering, generally interpreted as meaning the organization spends less than 50 percent of its resources trying to influence election outcomes for or against particular candidates.

As with national Democratic allegations concerning the Karl Rove-linked American Crossroads GPS, also a 501(c)4, the responsibility for discovering whether KSP is devoting the majority of its funds to electioneering would belong to the IRS, whose investigations are generally not very swift or public. There are also questions about how to measure the percent of an organization’s political activity.

It's not settled law, of course, but as long as you have Republicans in Congress and on the Supreme Court, it will be difficult to impossible to change.

That's all the information you should need not to EVER cast a vote for ANY Republican running for ANY office.
Posted by PDiddie at Friday, October 29, 2010