More evidence that Republicans can't win on their merits

-- There's a billboard that went up yesterday here in Houston that says "GOP is the new black." Seriously. 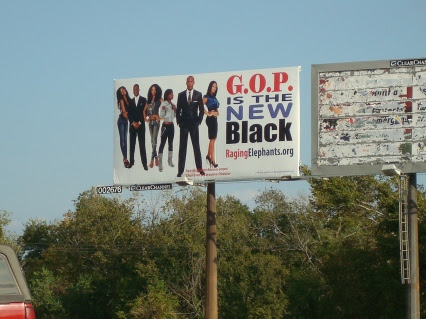 Mary Benton speaks for me:

Someone please show me proof of an African-American stampede toward the Republican Party.

-- In Nevada, a group named Latinos for Reform bought teevee airtime to run an ad on Spanish language stations telling Latinos not to vote.


The ad opens with an attack on the Washington Democrat (sic) powerhouses and tells its viewers failed to deliver immigration reform.

Its (sic) the ending that has Hispanic community leaders outraged:

"Don't vote this November. This is the only way to send them a clear message, you can no longer take us for granted, don't vote."

Anybody of any race who isn't voting is just giving away their power. "If you choose not to decide, you still have made a choice."

Update: you can view the ad here. From Sen. Harry Reid's campaign:

The group, led by a George Bush "Pioneer" fundraiser named Robert Desposada, has one goal - to suppress the Hispanic vote in Nevada.

-- And the King Street Thugs continue their intimidation tactics at EV locations around Harris County.

The complaints, he said, came from Kashmere Gardens, Moody Park, Sunnyside and other predominantly minority neighborhoods. The complaints included poll watchers "hovering over" voters, "getting into election workers' faces" and blocking or disrupting lines of voters waiting to cast their ballots. ...

We already knew that the Party of NO isn't interested in offering solutions, because we know they made the mess we're in today. Why would any right-thinking individual reward failure with more authority?

Because they just aren't thinking right, that's why.
Posted by PDiddie at Tuesday, October 19, 2010