By a nose, at the wire 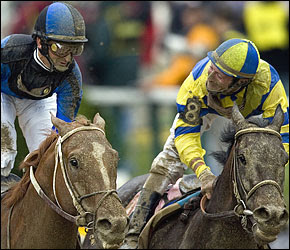 Calvin Borel, riding Street Sense (right) looks at Robby Albarado, aboard Curlin, as the two horses cross the finish line at the Preakness Stakes today. Curlin caught the Kentucky Derby winner at the wire to win.

In the end it was just two riders from Cajun country barreling down the stretch. Stride after stride, from the sixteenth pole, the two horses traded the lead, and when they hit the line together, Curlin bobbed his head in front when it counted most.

The day couldn't have been any more dramatic for Albarado, 33, of Lafayette, La., who won the first Triple Crown race of his career.

Two races before the Preakness, he fell off his mount, Einstein, in the Dixie turf stakes after stumbling over a fallen horse in front of him. The fallen horse, Mending Fences, suffered a broken ankle and was euthanized on the track.

Albarado walked away uninjured from the accident, but when the gate opened for the Preakness, he almost had another mishap.

Curlin stumbled briefly before Albarado righted him and worked hard to get involved in the race. Asked if his heart sank when he saw Curlin's front knees buckle at the start, winning trainer Steve Asmussen said, "Probably a little bit more than a little." ...

Borel, who grew up in St. Martin Parish, La., turned to Albarado just as they crossed the finish line and told his rival, "You got me," Albarado said.

"I had no idea where [Street Sense] was, but I thought he'd be coming," Albarado said. "Street Sense flew right on by me, but I got [Curlin] off his left lead and went and got him."

"I thought it was all over when I got by Hard Spun turning for home," Borel said. "I thought he was just going to gallop, but things happen. He just got to gawking 40 yards from home and he just got outrun."